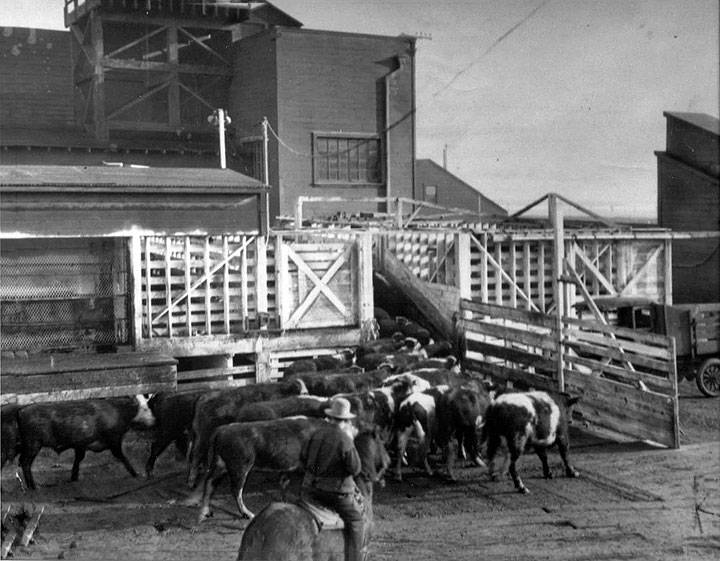 3rd & Evans, in the heart of today's Bayview neighborhood, was a brackish marsh and home to SF's second "Butchertown" until it was filled in the post-WWII era. This photo is dated January 11, 1921. 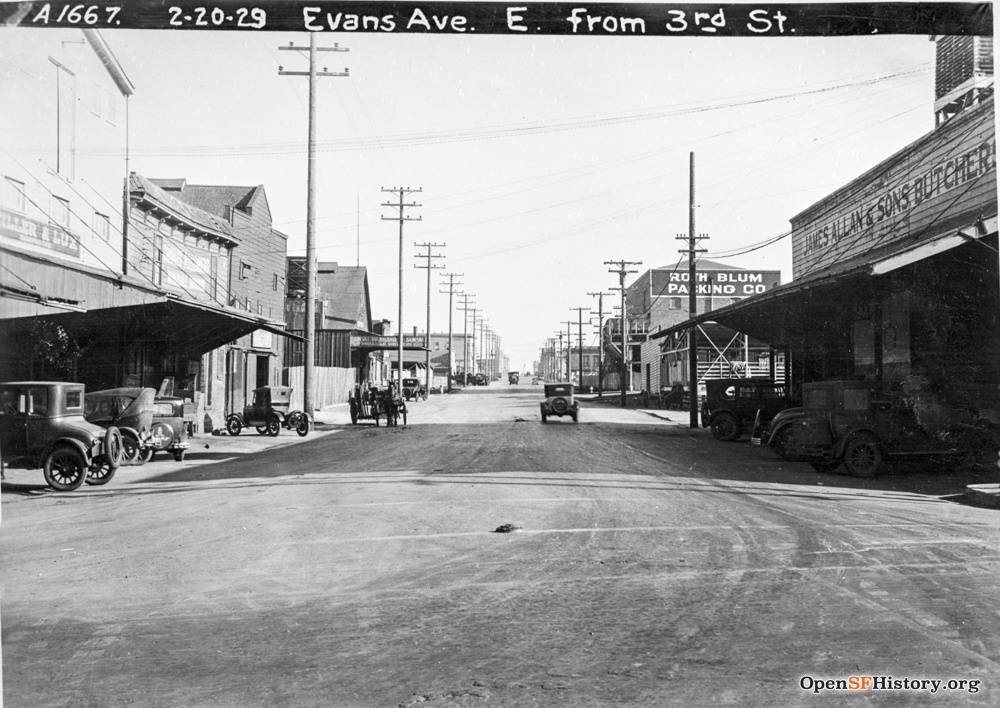 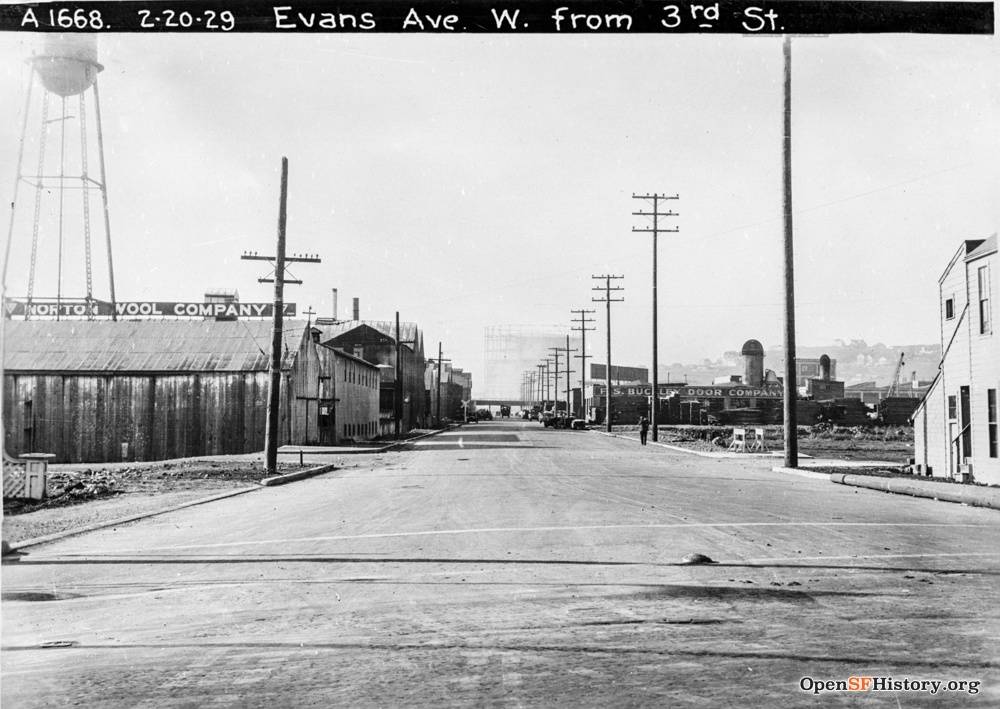 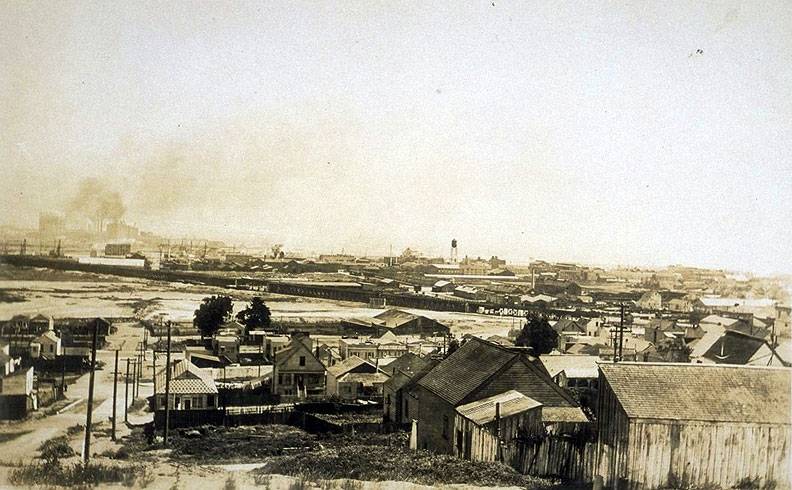 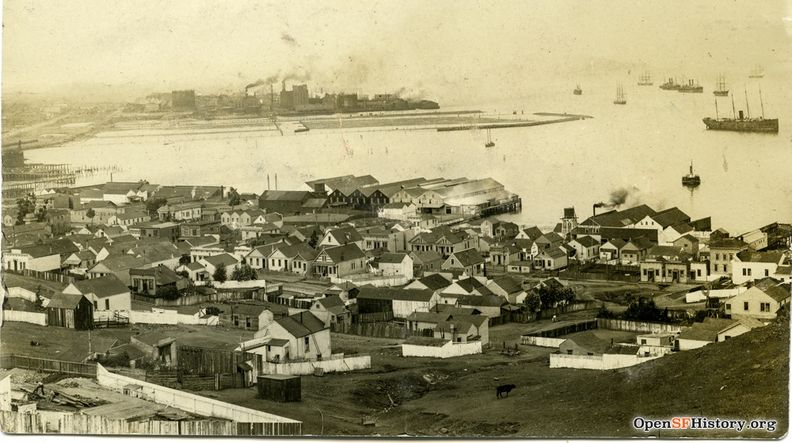 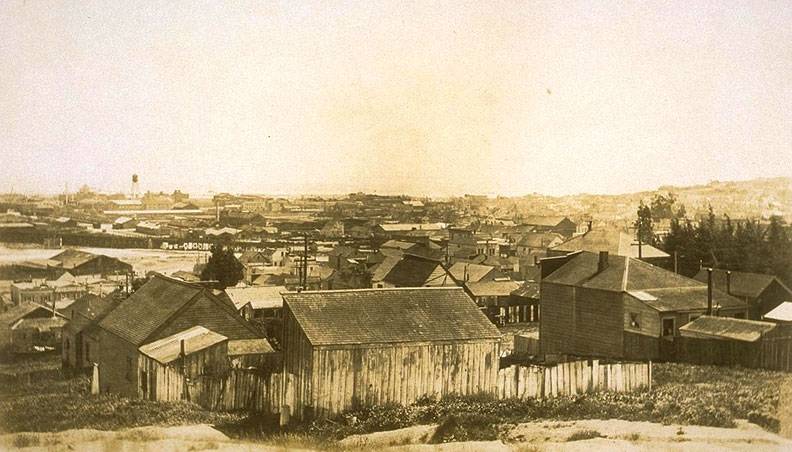 Bayview when it was Butchertown, 1920s.

In 1868 a group of butchers purchased eighty-one acres of submerged and waterlogged tidelands from the State of California to establish a "Butchers' Reservation" for slaughtering animals. Filled with marshes, creeks, and bayside mud flats, this area of southeastern San Francisco had remained largely undeveloped despite several attempts at residential housing ventures during and after the California gold rush.(3) The butchers had been forced to the outer fringes of town by an ordinance that banished the slaughtering of animals — and the smells, sounds, and carnage that went with the process — from the city center. An abundant water supply and the area's relative isolation must have appealed to the meat men: offal from butchering could be easily disposed of in the ebb and flow of bay tides or the area's meandering creeks; isolation reduced the chance of another forced relocation when city development encroached.(4)

By 1877 all eighteen of the city's slaughterhouses had relocated to the Bayview sector of San Francisco. Related industries quickly followed: tanneries, fertilizer plants, wool pulleries, and tallow works joined the industrial community of the area that San Franciscans would call Butchertown.(5) Workers came with the industries; the greatest number of neighborhood residents worked in the surrounding industrial plants of the area. Though some residential development had preceded the butchers' move into the area, sustained development of land was a result of the jobs the Butchertown industries created.(6) 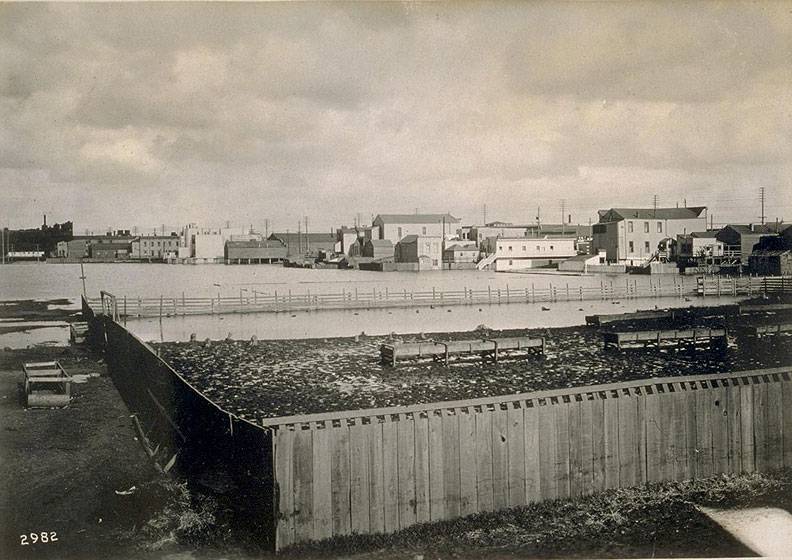 Butchertown along the shore. 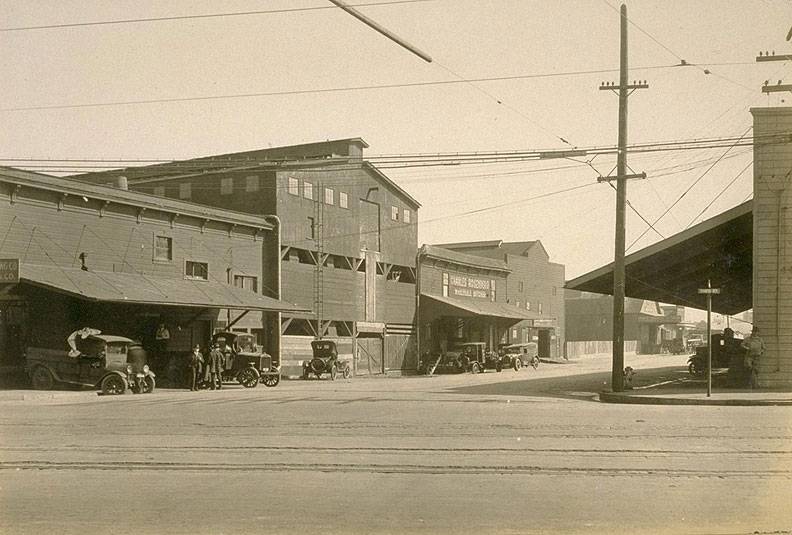 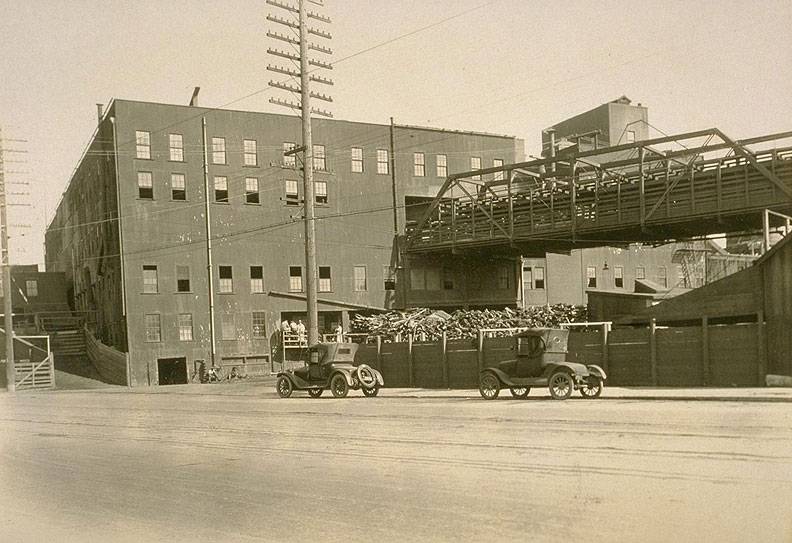 The Butchers' Reservation was bounded by First Avenue South to the north (present-day Arthur Avenue), I Street to the east (present-day Ingalls Street), Railroad Avenue and Kentucky streets to the west (present-day Third Street), and Bayshore to the south.(7) The surrounding area of housing and businesses, including the Butchers' Reservation, was the area known as Butchertown. Thus, Butchertown became an industrial suburb within San Francisco's city limits.

Butchertown's relative isolation from the main body of San Francisco and its unique urban geography helped to foster and reinforce a distinct sense of neighborhood identity and community in its residents. This geography led to a combination of urban-industrial and rural-agricultural economies and a mixture of industrial, residential, and agrarian land uses. More than just geography and neighborhood businesses fostered a sense of community, however; social networks and organizations linked residents to one another across ethnic and religious lines. Unlike some other areas of San Francisco, the neighborhood's various ethnic groups lives intermingled with one another in the district.(21) This pattern of mixed housing also helped to break down barriers and to create a strong face-to-face society characterized by a sense of "neighborliness."(22) 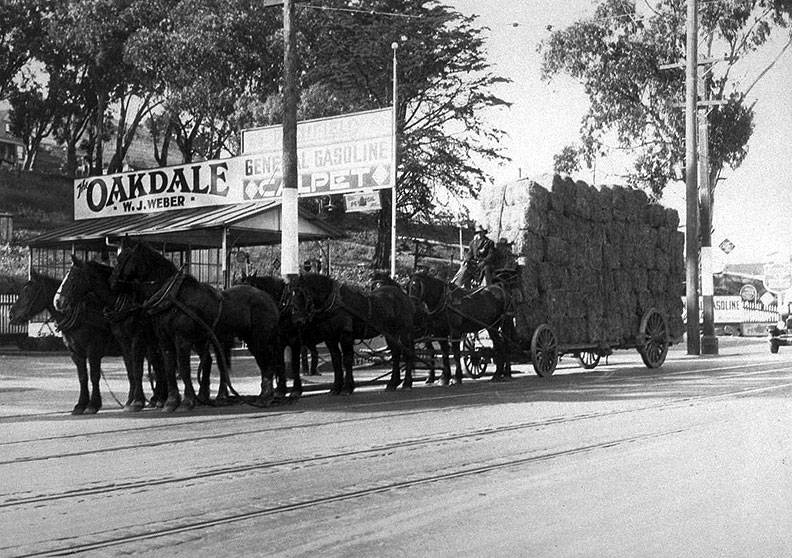 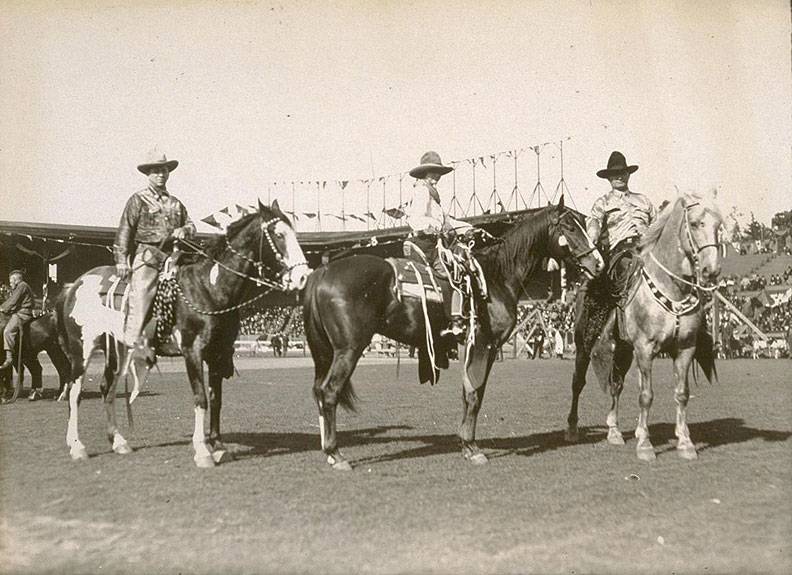 Along the fringes of the neighborhood to the south and east, undeveloped hillsides were pasture to cattle and horses owned by small ranchers, farmers, and Butchertown's cowboys. In the southern section of the neighborhood, small vegetable farms, ranches, and nurseries took advantage of the open land.(28) 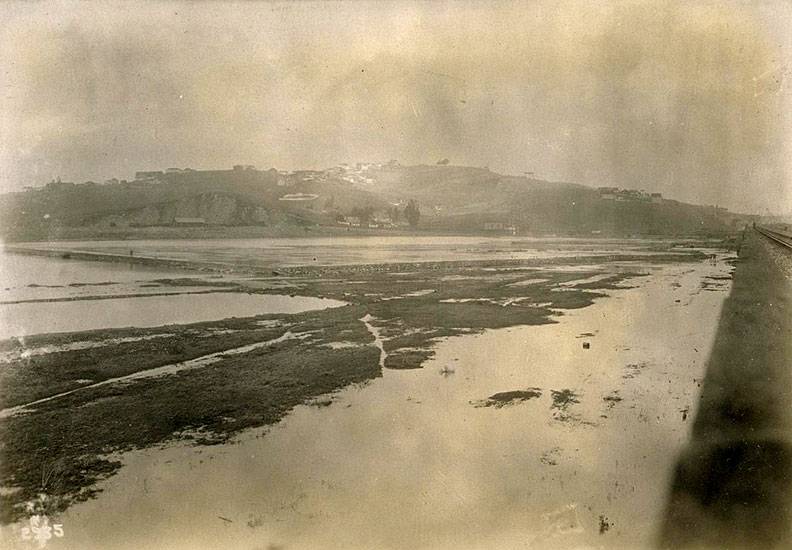 The area's proximity to plentiful water, the bay, and open land drew industries and created a unique mix of urban-industrial and rural-agricultural economies. These economies shaped the landscape according to their needs and took advantage of the natural features of the district. For example, the four main slaughterhouses of Butchertown — Miller & Lux; James Allan and Son; the H. Moffatt Company; and J. G. Johnson — were located in the northeast sector of the neighborhood along Islais Creek and the bay's edge, drawn by the area's plentiful supply of water and its distance from the rest of San Francisco. All of the slaughterhouses were constructed on pilings over the water to allow the foul by-products of their operations to be washed away by the water of Islais Creek and bay tides. The slaughterhouses maintained a network of stockyards along the western boundary of the neighborhood and on the hillsides of the southwest sector. Cowboys were a common sight, driving cattle from the stockyards along the Southern Pacific Railroad and the Atchison, Topeka, and Santa Fe Railroad tracks on the western fringe of Butchertown to the slaughterhouses to the northeast.(29)

Shipyards, a few factories, a handful of houses, and open land characterized Hunters Point throughout the 1920s and 1930s.(31) 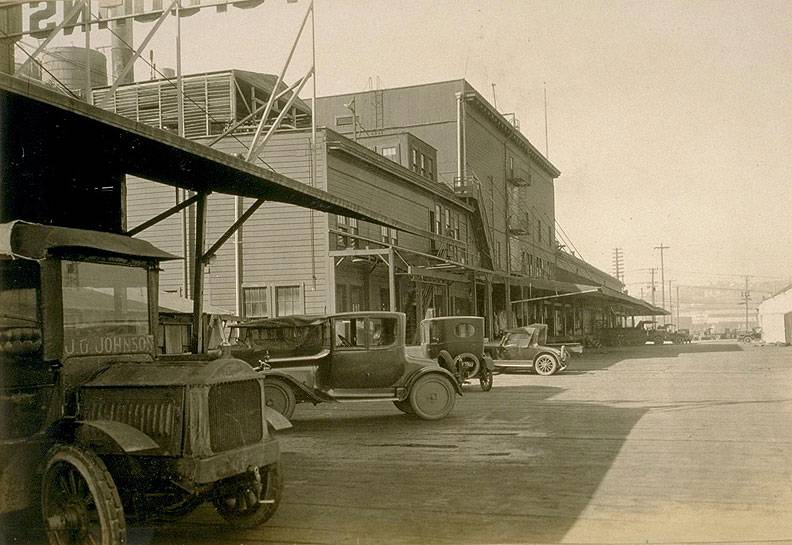 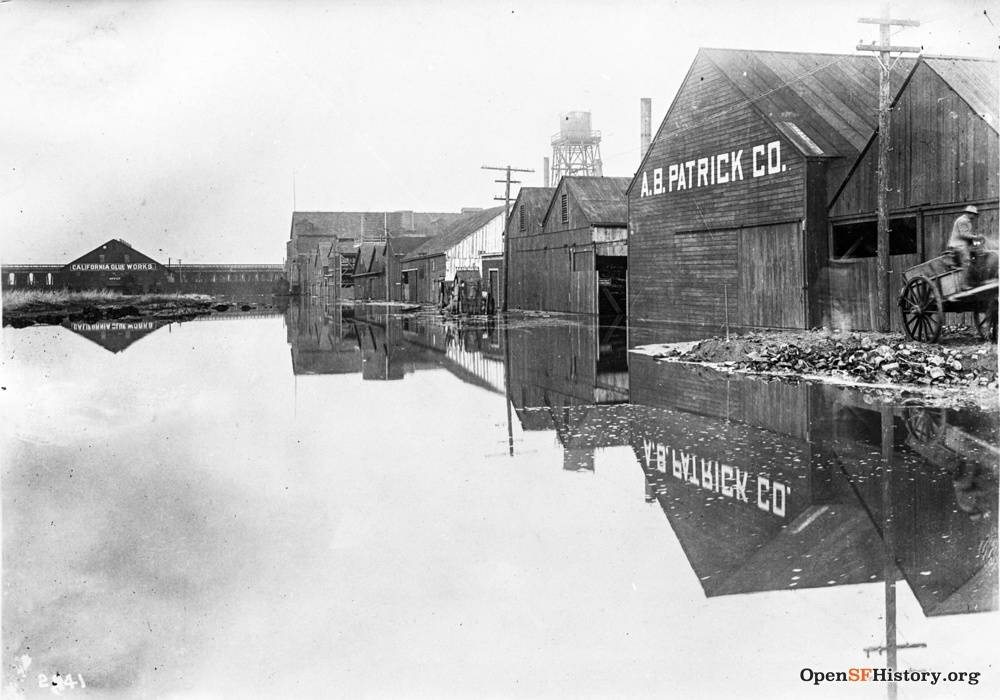 Bay View's industries provided steady employment to a predominantly male workforce.(38) Many residents struggled to make ends meet, however, especially during the Great Depression.(39) Butchertown residents supplemented their diets and wages by creating a dual economy in their backyards. Most residents kept vegetable gardens, along with chicken coops, rabbit hutches, and occasionally farm animals like pigs and goats. Gardening and raising livestock represented a complementary domestic economy that augmented the wage economy. It also reinforced Bayview's distinct hybrid of rural and urban land use.

The neighborhood's close-knit community also created a distinct identity. The main ethnic groups in Butchertown were French, Italian, Maltese, and Irish Americans. Unlike other sections of San Francisco, different ethnic groups lived side by side in the Bayview with little geographical concentration in housing and without much conflict.(45) 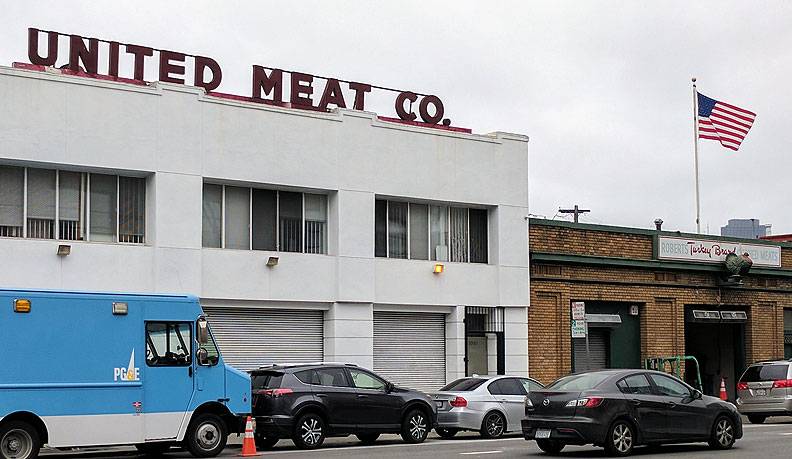 Two meat companies doing business on Bryant near 8th Street, 2017... a legacy of the original Butchertown along Mission Creek in the 19th century?

5. "Butchertown: Argument Before the Board of Supervisors For and Against the Extension of its Limits," The Daily Evening Bulletin, Feb. 25, 1878, 1.