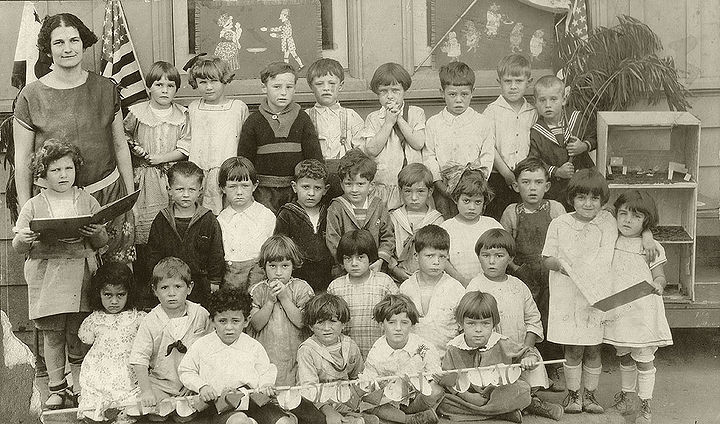 1925 kindergarten class at Bret Harte Grammar School. Mrs. Dickey at left with he daughter holding book; author of this memoir Ruth Eshow and her sister are at right (holding book together).

The day I entered kindergarten at Bret Harte Grammar School is lost in the mists of memory. But it was the center of my life, my introduction to a new world, where I met children of my own age from the Bayview, making friends who would follow me to Portola Junior High upon our graduation from the sixth grade.

Two one-story, sober-looking buildings stood on Third Street at the corner of Ingerson and the Black Hill that separated it from Candlestick Cove. Minimum landscaping consisted of a row of hedges on the Third Street side. A flagpole stood in the sloped, paved yard where the entire student body gathered every morning to pledge allegiance to the flag as well as to the State of California. 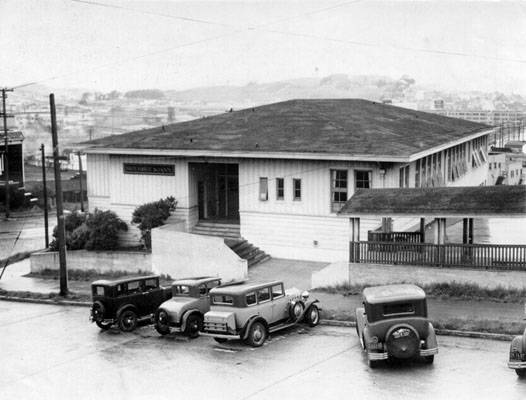 Kindergarten was a thoroughly pleasant experience. Miss Dickey, a tall, square woman with brown curly hair in a “bob” welcomed us. (She must have been Mrs. Dickey, given that her daughter was also a pupil.) Our days followed a reassuring pattern. Every morning we formed two lines, boys on one side, girls on the other; we curtsied to each other and sang, “how’d you do my partner, how’d do today; will you dance in my circle, I will show you the way.” Joining hands we did dance in a circle. Another was “Good morning to you; good morning to you! We’re all in our places, with sunshiny faces, at work and at play to start a new day.” When recess came we went outside. Miss Dickey selected one child whose hand she held as she watched the others. The suspense of waiting to see who would be honored was almost unbearable. But she was fair, never showing favoritism, not even to her own child. There were, of course, the naps. We rolled out mats, drank a glass of milk and nibbled on the graham cracker that came with it. (Most of the children first gnawed the cracker into a circle.) We then lay down and closed our eyes. Miss Dickey must have looked forward to this period more than we.

There was no playground equipment but no one expected any. The flat granite slabs that flanked the staircase leading to the wide doors of the main building, low and smooth, served as slides. Otherwise we made up our own games.

What the boys did I don’t remember. They ran around a lot, harassing the girls. They shinnied up the flag pole and played marbles and leap frog. We girls also played marbles besides jacks, hopscotch and jump rope. As two girls turned the rope a line was formed, waiting for the signal. The rope turners chanted, “On the mountain stands a lady, who she is I do not know; all she wants is gold and silver, all she wants is a pretty little girl.” The last line, “jump in my…” named the next in line who was “pumping” in anticipation of entering correctly, without stumbling. If the rope was turned fast—“salt and pepper”—we shouted the alphabet until the jumper moved out for the next one. “Double Dutch” which required two ropes and agility always filled me with trepidation as I waited my turn.

On the same side of the street but on the opposite corner of Ingerson stood a building almost as important as our school. A two-story, nondescript wooden building housed the combination stationary and candy store operated by Miss McLafferty (McLaugherty?) a quiet, grayish lady of indeterminate age. She stood behind a long glass display case in which was displayed a wide choice of candy —jaw breakers, wax replicas of trains and animals containing sugared water, Hershey bars and bubble gum. Big glass jars on top contained licorice sticks and lemon drops. We contemplated the array seriously before making an investment. The opposite side of the shop was lined with shelves. There we found tablets, pencils, paste, crayons, everything we needed for school. It was there also that we found flat packets of crepe paper in lovely pastels, essential for making costumes for the events celebrating Halloween, May Day, etc. at school and for non-occasions at home when we just felt like dressing up and parading around in the neighborhood.

The shop had a secondary importance. Every Thursday after school we trooped up the narrow staircase to the attic where nuns from All Hallow’s taught us catechism; they rewarded us with lemon drops from Miss McLafferty’s stock. It was in that dimly-lit, open-raftered garret where I had an epiphany. God was not Armenian!! He spoke English! I had learned my bedtime prayers in my mother’s language—and my first—and had assumed He belonged exclusively to us. It took a while to reconcile myself to this revelation.

Everyone went home for lunch. Our house on Le Conte was probably a half a mile away. We crossed Third Street, up Key Avenue, then down a lane next to the Werner’s house and finally Le Conte, an unpaved street until 1927 or 1928. During the rainy season the route was slippery. It was not unusual to slip and fall, making it necessary to go home and change. The building of the four-lane Bayshore Highway complicated matters. It cut us off from our regular route to Third Street. An underpass existed but it was not only inconvenient, obliging one to walk up a few blocks, cross under the highway and then walk back, but it smelled of urine. Worse, it was spooky. We didn’t want to be trapped underground by an unsavory character lurking in the dark, ready to pounce. We took the most direct route which required crossing the surface of the highway. We learned to wait for a break in traffic, then dash to the center white line, confident it was No-Man’s Land, stand there until there was a break in the opposing lanes, then run fast to the other side. This routine carried on four times a day, five days a week made us agile. No one ever got hurt.

There were no serious disciplinary problems that I remember. The teachers were kind, bestowing nicknames and small gifts. My sister Anita was Snicklefritz. Mine, due to a humiliating episode, was Gummy Ruth. (I had been given a bunch of pencils to sharpen. For some reason, I removed the gum from my mouth and held it in the same hand in which the pencils not being sharpened were. They stuck together. It was a humbling experience. But, at the end of the semester, Miss Center, the Third Grade teacher, gave me a small pastel drawing she had done of old Mission Dolores so I assumed I had been forgiven. I found it stored in a foot locker with photos, found a frame for it and hung it up, a reminder of a time long gone.