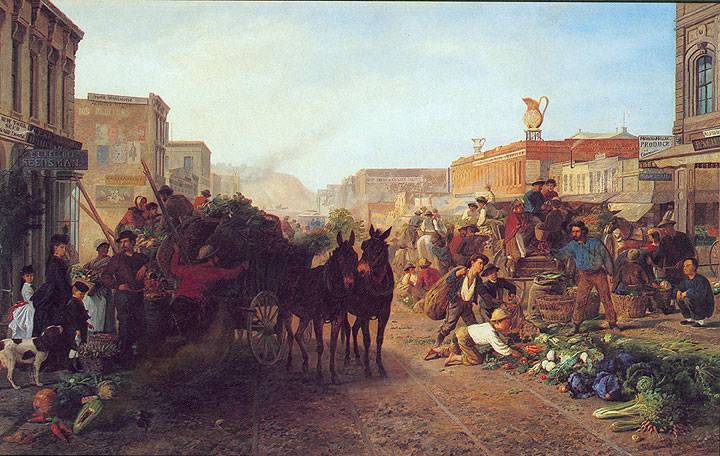 It is said that on foggy nights, you can still see brown stains swelling and ebbing on the pavement here, while cultured, melodious laughter rings out from the fog. The bloodstains (and laughter) supposedly belong to a 19th century San Francisco character named "Lord" Charlie Fairfax, the "Beau Brummel of San Francisco's Golden Dawn" (Dickson). The beloved Lord Charlie was "courteous, gallant, debonair, a charming gentleman when ladies were present, and a heavy drinker always" (Dickson, 55). As charming as he was eccentric, Lord Charlie was elected clerk of the Supreme Court of California. But one day his ex-deputy, upset over an imagined slight, challenged him "in foul terms that no gentleman could countenance." Charlie grasped the deputy by the throat and shook him as a terrier shakes a rat, then flung him away in disgust. As Lord Charlie turned away, the deputy whipped the sword out of his cane and attacked. Lord Charlie parried the thrusts with his bare fists, to no avail; the sword pierced his shoulder and grazed his heart. Bleeding profusely, Lord Charlie sank to his knees, pulled a derringer out of his vest pocket, and drew a bead on his murderer. Then he shook his head and dropped the gun, saying "No. What's the use? You are a cowardly murderer. You have killed me. But you have a wife and small children. On that account I will spare your life" (Dickson, 60). Lord Charlie then collapsed and was rushed to the hospital. Anticipating his imminent demise, Lord Charlie's friends decided not to clean up the bloodstain, but to let it remain as a tribute to his memory. Then, somehow, Lord Charlie confounded all his doctors, recovered from what had seemed a fatal wound, and enjoyed eleven more years of life. Though rains have washed away the stains, and the wooden sidewalk has given way to pavement, legend has it that the unearthly brown blotches occasionally reappear on the sidewalk, rekindling the fading memory of the magnanimous Lord Charlie and his refusal of death.