Originally published in "It's About Times", the Abalone Alliance Newspaper, August-September 1984. 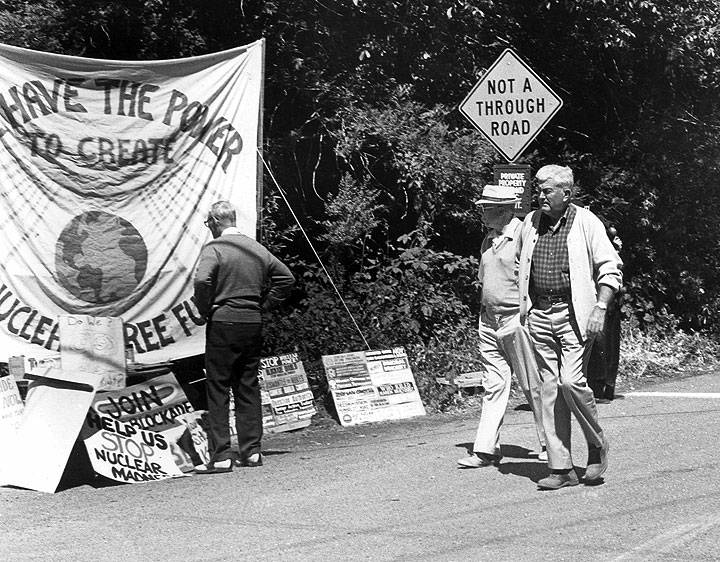 On Sunday, July 22, 1984 in the quiet Russian River resort town of Monte Rio, over 300 people descended upon a dirt road which is the only way in or out of the Bohemian Grove—a summer camp for the US ruling class. For the first time since the Bohemian Grove Action Network brought attention to the encampment over five years ago, people committed acts of civil (dis)obedience as a means of expressing their outrage at the power these men have over all of our lives.

For five hours a combination of, demonstrators, rows upon rows of spider webs made from yarn and string, "Flo the Whale" and the Sonoma County Sheriff's Department blockaded over 60 carloads of corporate biggies, including David Rockefeller and Henry Kissinger. The action, organized by the Sonoma County Direct Action Coalition (SCDAC) and the Livermore Action Group (LAG), netted 51 arrests, including a reporter for the San Francisco Examiner. All were cited, out by nightfall with a return, court date of November 2nd. 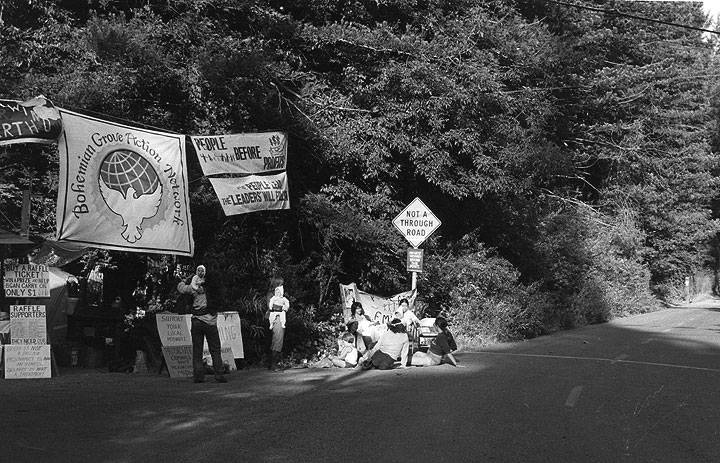 There were many exciting moments which helped keep spirits high and the action lively. Members of the Spiderwomyn affinity group strung yarn across the road to create, spider webs, reminiscent of the Women's Pentagon Actions and Greenham Common. The use of the webs seemed especially appropriate for the Grove since the motto of the enclave is "Weaving Spiders Come Not Here." The sheriff's deputies seemed very frustrated, since as soon as they cut their way through the strands of web people were there to reconnect, advising the officers that it is extremely bad luck to destroy a spider's web. Major General Moore of the Monte Rio police force, the officer in charge, was overheard muttering that they should use the webs to string up the protesters. This, fortunately, did not come to pass.

After the deputies arrested the first wave of blockaders they hopped on their buses and drove off, leaving the remaining demonstrators in total control of the road, wondering what was going on. A group of people dressed in the style of beatniks and -bohemians gave' a rousing reading of "poetry by Allen Ginsberg, Lawrence Ferlinghetti and Jack Kerouac. After finishing their “cool” reading they climbed over the wooden gates at the entrance of the Grove and sat down. They were quickly joined by members of the youth affinity group from Bolinas called PINK—People Infuriated with Nuclear Killing.

As the grove security force frantically phoned the sheriff's department to come back and arrest the trespassers, they tried out a few threats. "You'd better leave before you get in trouble. Don't you know, this is private property?" The people continued to enjoy control of the road for at least another 45 minutes, whence the authorities rolled up in their buses to arrest the folks inside the Grove (the blockaders—not Rockefeller and his buddies, unfortunately).

The blockaders were told that they were part of an "illegal assembly" and that those remaining would be arrested. The deputies then made a sweep down the road, poking people with their clubs and throwing them onto the side of the road as they cleared the way for the Porsches, Mercedes, BMW’s and other cars that had been waiting to escape. Many men were observed crouching down in their seats to avoid recognition as they sped away. People along the roadside called out to them, warning them that we'd all be back next year.