by Marian Yu, originally published in the Tube Times, October 1991 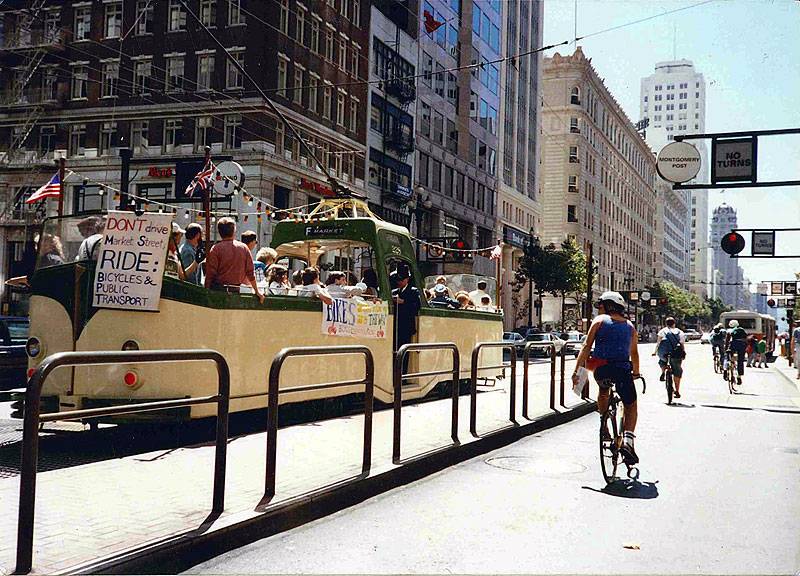 On Labor Day, a group of about 25 bicyclists biked along Market Street to rally for a proposal to close Market Street to private autos and make it a public transit and bicycle thoroughfare. The proposal is currently on hold, waiting for the results of a traffic study which is expected to recommend Market Street closure, or rather, its opening to the multitudes of us who prefer to smell the flowers instead of fumes as we get around.

Most of us who gathered at Duboce Park to begin the action were members of BABA (Bay Area Bicycle Action) an ad hoc group of environmentalists that came together before Earth Day to organize the Bicycle Parade. Banners and posters were ready. One sign read “I'd rather bike in the temperate zone than fight a war in the desert,” a timely protest against war preparation in the Gulf and demonstrating a ready solution to our dependency on fossil fuel. Other posters supported public transit, pedestrian and bicycle amenities that are needed for a vital, peaceful, and efficient Market Street. There were other cute messages like"Commu-nicate by bicycle."

We rolled down to the SF Mint where the troileys in the festival assembled. Already, there was one man yelling at one of our leafletters about us being commies and dupes. Nice start. Then we went on to Market Street, stopping at Van Ness Avenue and the Civic Center to display banners, leaflet, and do some recruiting to the action.

When a woman joined us who had been in New York when Central Park was closed to car traffic, I was encouraged. If the big bad apple, the big arrogant metropolis of big machines, big buildings, and big money, could bow to the little folk who actually need to breathe fresh air, maybe San Francisco, the Sodom and Gomorrah of sunshine and oranges, nuts and bran flakes, could concede a few yards of toxic pavement to the people's wish.

There was another guy who said, “You all have a nice idea. but it's not gonna work.” Well, at least we who listen to fairy tales and fantasies can try to tell other folks about the possibilities. Band together with fellow cyclists and walkers and bus riders and see we're not alone in feeling annoyed, powerless, and alienated in the environment of noisy, smelly and nasty cars choking up our streets. Anyway, we were having fun.

The historic trolleys, like any well traveled and well kept bicycle, were a sight of beauty beyond our present aesthetic norms. It's no accident that the trolleys are dated many decades ago. One from the USSR was red with gold lines around the edges. Another from Australia had an open top like a giant tub, its colors a familiar beige and green like our old Muni trolleys. Its destination:"Pleasure Beach." This trolley was boarded by several BABA folk, and the Muni driver allowed us to display our banners from the moving trolley.