If you’re in the market for new digs in the neighborhood you might want to check out this property listing at 550 Mason: “3BR/@BA, view of the Bay, 2 car-parking, Hrdws floors, granite counters and more.”

What you’ll be buying is a condo (asking price $1,325,000) in a building that’s been around in one form or another since the 1860s. During those early years, several small malting factories and brewers plied their trade on the premises. At the time, nearly all San Franciscans in the beer business were Germans. There were small breweries in neighborhoods all over the city where clusters of Germans happened to reside. Then in 1878, another German, John C. Bauer, took over the entire premises and the building became the Bauer & Schweitzer Malt House. John remained at the helm of the business until 1906 when his son George W. Bauer took over the firm. 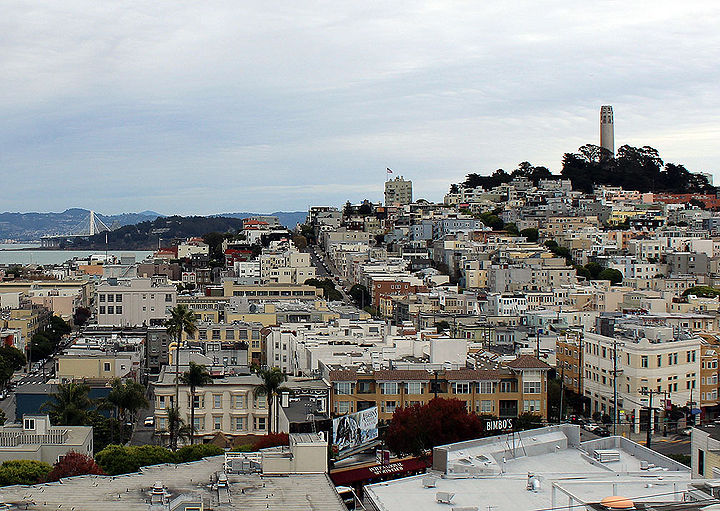 Malt House is cream-colored larger building at left of photo (see below for close-up).

George had had quite a career in his own right before taking up malting. Born in 1874, he graduated from UC Berkeley in 1897 and within six years he was a Captain in the Naval Militia in full charge of California’s naval forces. At that time and prior to 1918, states were in control of naval units stationed in their harbors. As Captain of the Naval Militia, George had the authority to call up Naval Reserves for emergencies. This is precisely what he did in 1906, calling up 800 sailors for duty in San Francisco where they patrolled the waterfront at the time of the San Francisco Earthquake and Fire. While running the Bauer & Schweitzer, George also maintained his naval affiliation and was promoted to the rank of Admiral in 1938.

When George took over operations in 1906 the timing was not particularly good. The old building was nearly destroyed in the April, 1906 catastrophe. As a result George built a new concrete and steel reinforced structure and installed state of the art French malting equipment. The rebuilding was completed in 1908 with Bauer & Schweitzer as the sole tenant.

George lived the life of a prominent San Franciscan, belonging to numerous clubs: among them the Olympic Club, the Commonwealth Club and the Press Club. Somewhat mysteriously, however, he died by his own hand at the age of 74 while residing at the Fairmont Hotel. Money apparently wasn’t the problem. He left an estate which in today’s dollars would be in advance of 7 million dollars.

After George’s demise, Bauer & Schweitzer continued operation, supplying malt to Bay Area breweries, including Anchor Steam Beer, up until it ceased operations in 1981. At that point the building was designated a historic landmark by the city, an honor that discouraged many would-be developers who knew it limited their development options. Except for occasional use as a motion picture sound stage (the TV series “Nash Bridges” made use of the facility), the building remained vacant.

But in 2001, Wharf Associates & Emerald Fund and the firm’s architect Clay Fry came up with a plan to renovate a good part of the building while converting it to condominiums. A long time local resident remembers that when the builders removed most of the silos during construction (the tops of two remaining silos can still be seen today from the east side of Francisco Street), they were so big they had to be cut in pieces.

These days, passersby of 530 Chestnut Street can view artist William Dupont’s murals (circa 1930) in the lobby depicting the beer making process from the fields to the brewery. These murals were once located in the tasting room and are very reminiscent of murals located in Coit Tower and the Rincon Annex, echoing other depression era WPA Art Program works. 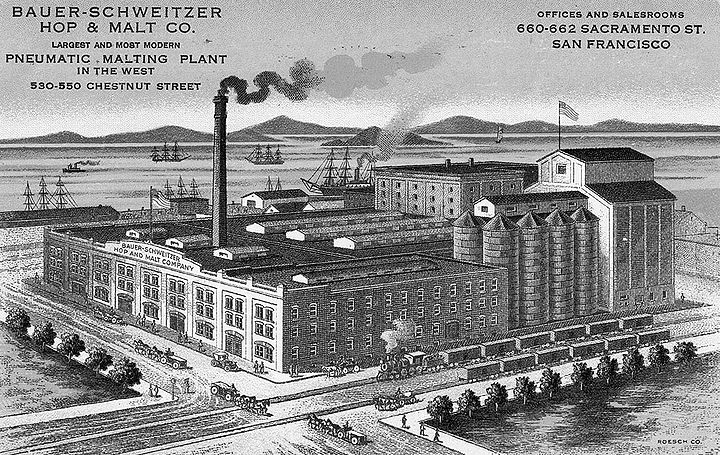 The rare postcard reproduced here reveals how freight cars came up Mason Street from Jefferson on a single-track spur. Mason between Bay and Francisco had a setback of about 200 feet (approximately the depth of the current Trader Joe’s) so freight cars and engine could make the turn at Francisco. The freight cars were operated by the Belt Line, which had 70 miles of track including spurs to all the piers. It ran from Fort Mason to Islais Creek. Old timers will remember that the Embarcadero was a 4-lane street with four lanes of tracks running alongside until the emergence of the Embarcadero Freeway (1961 to 1989).

Another local resident born and raised on Francisco Street remembers that when the malt plant was still operating the smell was overwhelming. “But you got used to it,” he said. Residents also remember that the only real noise was the loading of the freight cars and that was usually over by 5PM when the freight cars were supposed to be off Francisco Street. Occasionally the cars were left over-night causing dark and unsafe conditions after public housing was put in place during WWII.

Now the malt plant is gone, and the public housing has become the more agreeable North Beach Place. But as your real estate agent will be happy to point out, the “view of the bay” remains. 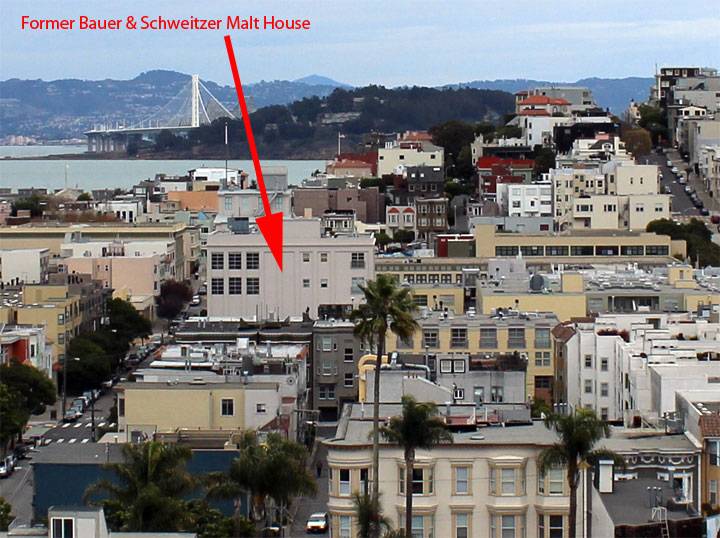