Bachelors on Telegraph Hill in the 1950s

Originally published in The Semaphore #174, Winter 2006

When in the mid 1950s, after graduating from Stanford and serving a stint in the Army, 26-year-old Jeffory Morshead moved to Telegraph Hill, the neighborhood was undergoing a kind of bargain-basement gentrification. The artists, poets, craftsmen and bohemians who had long been central to the scene were still around, but the landscape was also dotted with young men in suits and pert girls in hats.

Like Jeffory, these young professionals walked down the Hill each day to their jobs in the Financial District. But to hear Jeffory tell it, work wasn’t at the top of their agendas. What interested them most was each other, young men and women feeling their way to intimacy in the years before the sexual revolution. 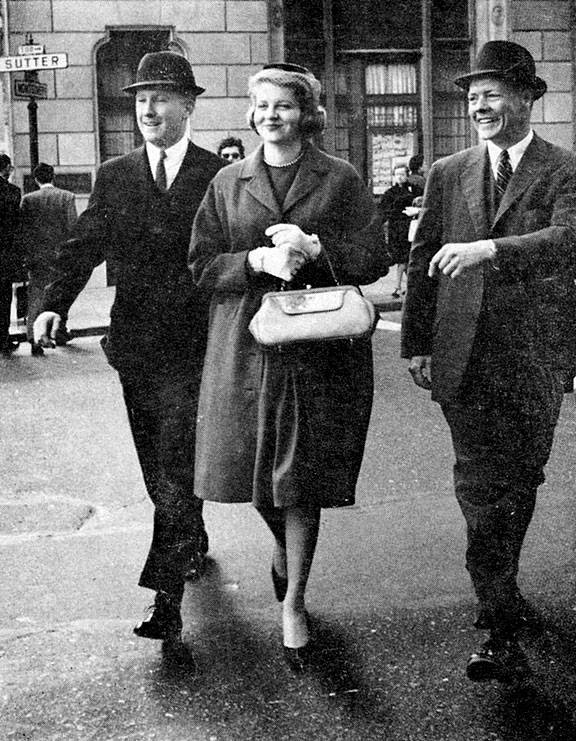 Telegraph Hill, especially the area around Union and Montgomery and Alta Street (where the “Duck House gang” lived), was a magnet for these 20-somethings. According to Jeff, for a young person, getting a place in this increasingly popular neighborhood wasn’t easy. He and his potential roommate Louis Nohl, a Stanford fraternity brother, couldn’t find anything for less than $100 a month. “After a month or so, Louis called me and said he had signed us up for a neat place at $60 a month. I was furious. It was just like Louis to go off and obligate me for $60, when I was making only $550 a month as a credit clerk at Pacific National Bank.” However, when Jeff calculated half of $60 was $30, he decided he could do it.

“The building, 220 Union, owned by Guido Lenci, is no longer there. Lenci had taken an old narrow wooden house and carved out four units. Our apartment had one room, two beds, a partition that came down to separate the kitchen from the living area and a tiny shower and bath.”

But when Jeff and Louis walked onto their deck they had vistas to rival those seen from the digs of the most hoity-toity of San Francisco socialites. “We had a view of the waterfront from the Bay Bridge to the far tip of Treasure Island. We had a poster of all the ships’ funnel markings and kept track of them coming and going below us. We nailed a wooden ladder to the deck and put a mattress on the roof where we could have cocktails, enjoying an even better view.

Spediacci’s (later Speedy’s) Grocery was just up the street. “He allowed us to charge. I think our bills got paid eventually.”

Across the street from Jeff’s apartment was the Compound, an infamous hang-out of small apartments that opened onto a flat roof. 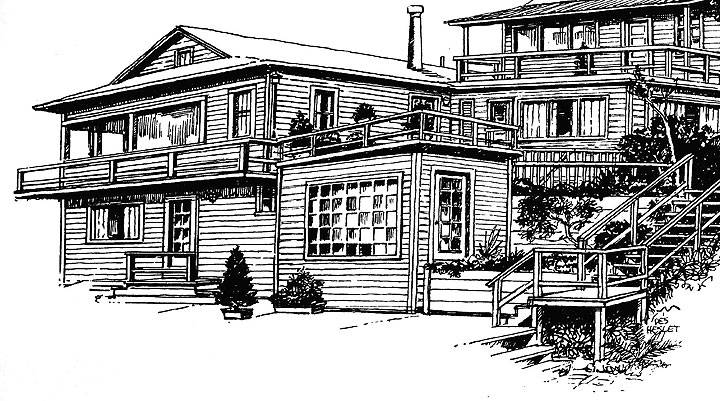 On Telegraph Hill, the cluster of pre-1906 earthquake cottages known as the “Heslett Compound.”

“On Friday nights, payday, we would gather at the Compound with our dates and barbeque chops and steaks.”

In one of these apartments resided Bob McNear, perhaps the most desirable and notorious bachelor on the scene. Jeff’s friend, Ann Seidel, told him of how she had arranged with the driver on the 39 bus to make a sudden stop at a certain intersection just so she could fall back into a seat next to Bob McNear and get acquainted.

Apparently getting to know Bob wasn’t a particularly difficult task, as he was no shrinking violet. “At one time, Bob McNear invited the shah of Iran to cocktails at the Compound and we really expected him to come, as Bob’s uncle had been ambassador to Iran. But two nights before, an envoy came over to check the place out. The next day, the shah sent his regrets. We had a party anyway.”

Bob, Jeff and Steve Hord, who still lives on the Hill, were all members in good standing of the “Tuesday Downtown Operators and Observers Club.” According to Jeff, the club consisted of about 20 bachelors who prowled the Financial District on the lookout for a girl who met their high standards. “We would then invite our latest discovery to join us for lunch at the Canterbury Hotel, as the only female guest. It was considered an honor to be invited, so much so that today far more ladies than we could have accommodated lay claim to having been invited. There are no records.”

Jeff had his own way of establishing himself with young women. “I would make fold-down bars for the ladies to replace the fold-down board separating the kitchen from the living-bedroom in those small Telegraph Hill apartments. My bar customers would pay me by giving me dinner while I worked. The bars could become quite elaborate with shelves and bamboo sidings and wheels, sometimes taking me as many as four or five nights — and dinners — to finish.”

When Jeff would get a date with one of these young women, the evening would go something like this: “I’d suggest dinner at a nice restaurant. We’d have martinis at my 220 Union place, than walk a block to the Shadows on Montgomery where, at this hour, I could count on an hour’s wait. I would make no reservations, so I’d say, as if thinking of it for the first time, ‘Hey let’s skip this and head for the Old Spaghetti Factory for more of a fun evening.’ This brought the evening’s cost down from unaffordable to an All You Can Eat family-style price tag, and, in fact, it was ‘more fun’.”

Embedded in Jeff’s account of young lives on the hill in the ‘50s is this story which says a lot about the physical longings of the young in pre-’60s America:

“How lucky could I get? The girl of my dreams (this week) invited me over to her place for dinner. Instead of the usual bobbing and weaving, she simply said, ‘Come to bed, I can’t wait.’ Surprised — after all, she was from the east coast — I began fumbling about, but the really surprising thing was that I thought that this young lady was the sometimes girlfriend of the previously mentioned great lover, Bob McNear. He got all the foxy ones when they arrived on the Hill. But believe me, at the moment I wasn’t complaining. It was mid-afternoon, the daylight streaming in the window, and the two of us were wrestling this way and that. “Oh, Jeffory,” she said in a voice suddenly devoid of passion. That was the signal. Out of the closet, highball glass in hand, emerged a smiling Bob McNear.