B Men and Automation 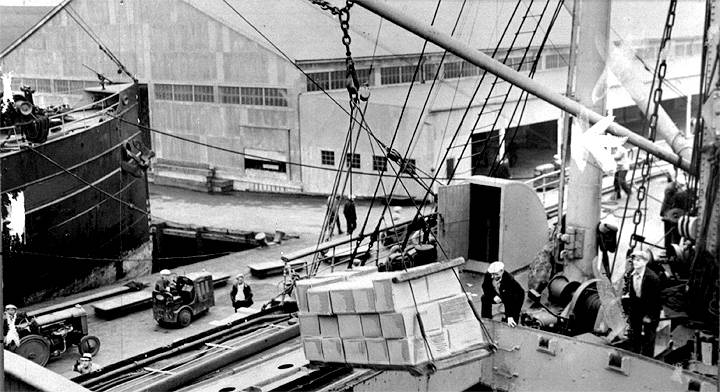 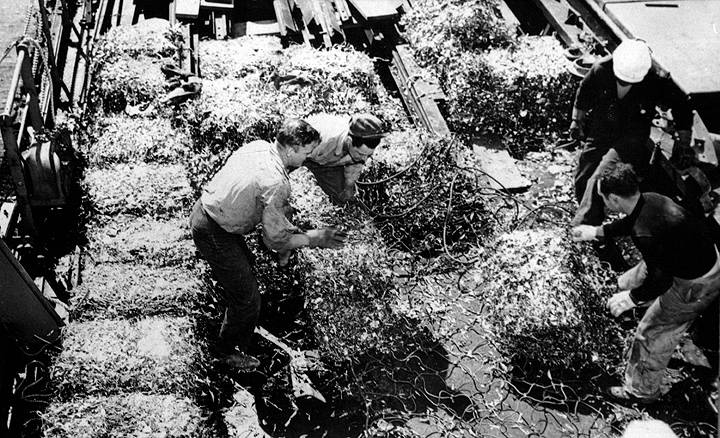 Longshoremen working a load of scrap wire and metal. 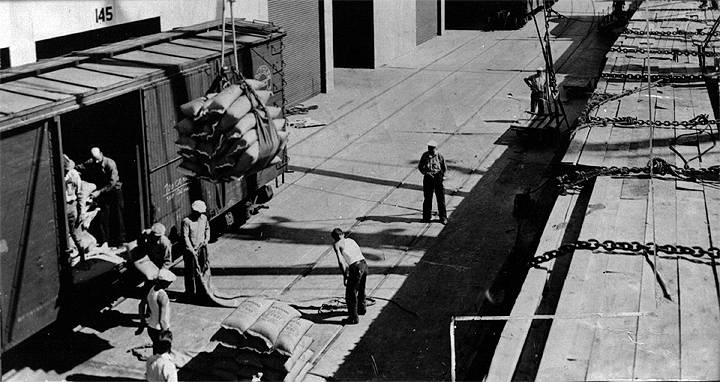 Before the full automation that came with containerization, longshoremen typically moved slingloads holding heavy sacks from shiphold to dock to train.

In 1960 International Longshoremen's and Warehousemen's Union President Harry Bridges negotiated the first six year "Mechanization and Modernization" contract with the Pacific Maritime Association. Like the contract that John L. Lewis negotiated for the automation of Big Coal, Bridges' contract allowed the unrestricted introduction of containerization of cargo, the use of vans, and automated cargo handling machinery. At the same time, it eliminated thousands of jobs. Primarily because of increased maritime activity due to war shipments, widespread unemployment up to now has been avoided.

Just as in coal, however, the human costs have been staggering. In the first year of the contract, the accident rate in what has become the nation's most dangerous industry went up 20% (Longshore Bulletin, ILWU Local 10, February 8, 1962). In the same year the longshore accident rate on the East Coast declined 1/2%. To obtain this contract Bridges gave in to the employers' request that they be allowed to "buy" the elimination of the major working and safety conditions improvements won in the militant struggles of the 1930's. The long established manning scales and the 2,100 pound sling load limit were eliminated. These provisions were not only eliminated for labor performed on containerized cargo, but on the still very sizeable amount of cargo manhandled piece by piece and sack by sack.

Even more than Lewis, Bridges won the respect of employers everywhere, admiration in many liberal circles, and from the press the title of "labor statesman." The contract established one gain for only one section of the longshoremen: during the six year life of the contract those who entered the industry before 1948, had achieved union membership prior to 1960, had reached the age of 65 and who additionally had 25 years of service, could retire with a $7,900 bonus in addition to their unimproved pension. They could retire earlier if disabled and receive a smaller bonus on a pro-rated basis. Or, if they had 25 years in the industry at age 62 they could collect the $7,900 in monthly installments until they reached 65 when the regular pension payments began.

Although the fund that pays the bonuses is created by the tonnage worked by all longshoremen, the recipients are older union members who work little more than half that tonnage. The balance is moved by B men and casuals working under the jurisdiction of the union and the younger men who became union members (A men) after 1960, none of whom are allowed to share in the fund.

The B men are a permanent and regular section of the work force who get the pick of the dirtiest and heaviest jobs that are left over after the A, or union, men have taken their pick. After the B men, casuals hired on a daily basis get their turn at the remainders. The casuals get none of the regular fringe benefits and are not compensated for that loss.

The B man system was created simultaneously with negotiations for Bridges' automation contract. The production of B men is appreciably higher than that of the union men because they lack union representation on the job. They pay dues but have no vote. In Bridges' San Francisco base and home local (No. 10) they can attend union meetings providing they sit in a segregated section of the meeting hall's balcony. These eager-to-be-organized non-union men do most of the work that is performed deep in the holds of the ships, the area of production that produced the militants who built the ILWU in the Thirties. 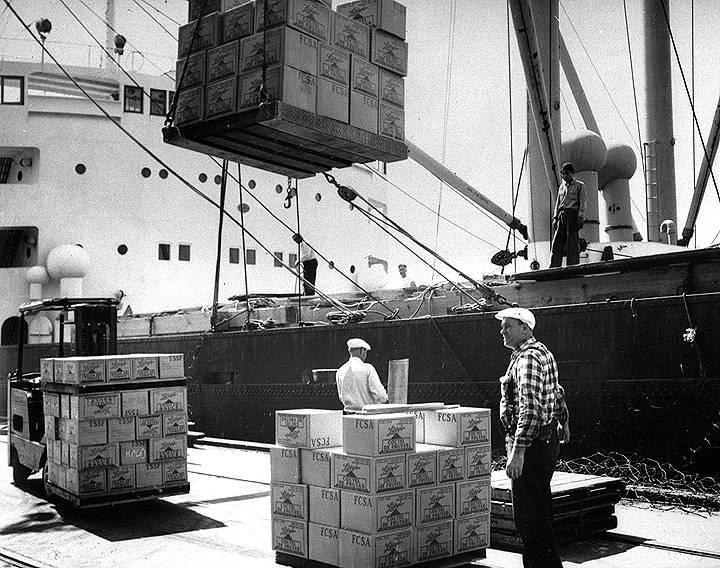 Bridges fears these young men. In 1963, in collusion with the employers, he led the Kafkaesque purge that expelled 82 of them from the waterfront jobs they had held for 4 years. (Over 80% of the 82 are Negroes.) They were tried in secret. The charges against them were not revealed. Their number, but not their identities was made known to ILWU members. Bridges' witch hunt methods and double standards make the bureaucratic procedures used to expel his union from the CIO, and the insidious tactics used by the government to prosecute both him and James Hoffa, bland by comparison. Hoffa and Bridges at least had the right to counsel, to produce witnesses, to know the charges and to formal trial prior to judgement or sentencing.

The atmosphere of intimidation resulting from the framing of the 82 has, until now, successfully silenced open opposition among B men and younger men. However, to Bridges' surprise, a revolt against his automation contract and leadership has recently developed among the older men. Unlike B men and casuals, most of them work on the ships' decks and the docks rather than down in the hold where the major burden of the current speedup is being carried. It appeared for a time that the prospect of their receiving a bonus upon retirement and lighter daily labors were making them more conservative; but 42% of all ILWU longshoremen (union or A men) on the coast voted against the second six year "Mechanization and Modernization" Agreement negotiated in July 1966. The speedup has reached these men as well. The contract won a majority in the large San Francisco local where retired members (pensioners) are allowed to vote, but lost in the other three large Pacific Coast ports of Los Angeles, Portland and Seattle. Had the B men been allowed to vote there is little doubt that it would have been overwhelmingly defeated. 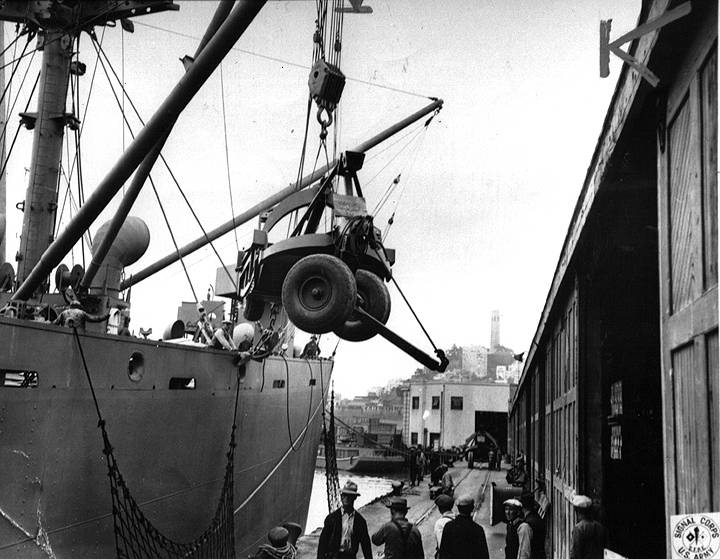 Longshoring along Pier 17 with Coit Tower on Telegraph Hill in background.

The dissension that has developed between Bridges and other top ILWU leaders since last July [1966] has become so deep that news of it has appeared in the San Francisco press. Rumors persist that the fallout is over the question of how to handle the growing revolt in the ranks. Whether Bridges continues to pursue the automation policies in which he has staked his entire reputation or abandons it to pursue a re-winning and improvement of the working conditions desired by his ranks, the effect will be to stimulate a continuance of the revolt. He is now plagued by lawsuits, including one filed by the expelled B men and another filed in Federal Court several years ago by ILWU Local 13 in the name of all members in the large port of Los Angeles. James B. Carey and David McDonald learned, and now Bridges is learning, that the pursuit of policies that alienate the ranks can also isolate a top leader from his co-officials and hasten his fall from power.