from The Annals of San Francisco, 1850 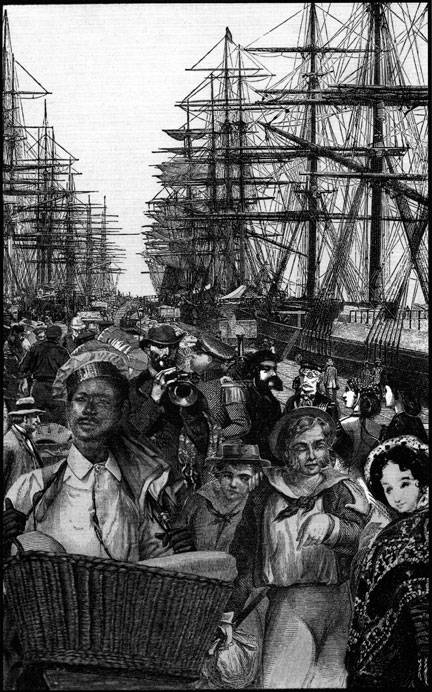 Once a fortnight, at the beginning and middle of every month, San Francisco, which is never without some feverish excitement, gets gradually worked up into a crisis.

The arrival of the steamer bearing the eastern mails is...an occasion of much excitement--not so much in respect of there being possibly some six or eight hundred passengers on board, as because there are fifty thousand letters and newspapers coming from home. The [semaphore] telegraph has some hours before announced that the Golden Gate is approaching the Heads. The glad tidings soon spread through the town. Those who expect to find friends hasten to spy and welcome them before even the vessel touches the wharf. Draymen and cabmen speed with their wagons and coaches to secure a job.

A multitude of persons attend for the novelty and excitement of the scene. There are nearly as many persons on the broad wharf as on the occasion of the steamer departing. On sweeps the Golden Gate--a magnificent specimen of the first-class ocean steamer. Her decks are crowded with human beings. Dense masses cluster on the highest planks that can afford them footing, and cling high to the rails and rigging. The passengers are chiefly fresh immigrants, who have sought the land of gold and marvels, to make or recover a fortune. And this is San Francisco! they say to each other, as they mark the forest of masts, and the hill-sides covered with buildings. Well! It exceeds all my expectations!