Animals of the Dunes 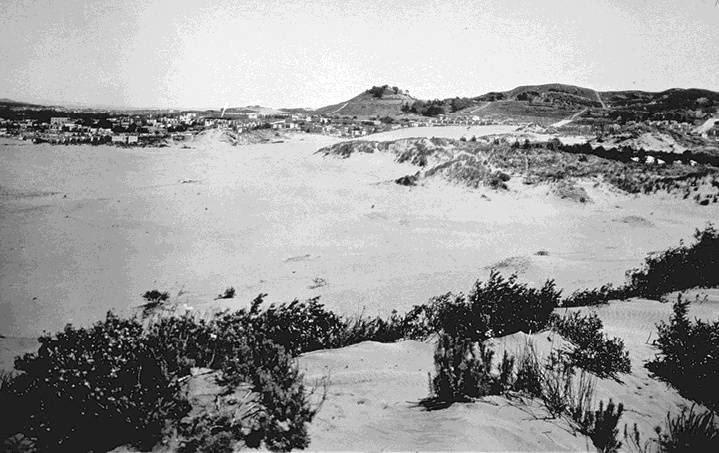 Probably most of those who visit the Cliff House and vicinity look upon the expanse of sand as a waste, with no sign of animal life, and only here and there a few low plants, Abronia (sand verbena), Franseria (Ambrosia chamissonis, beach-bur), etc., with some stunted willows in depressions; but notwithstanding its very desolate and unpromising appearance it is rich in insect life, many species hidden in the sand being exposed by pulling away brush or debris from the top of a hillock and starting the rolling sand.

Scratch any writer with something to say about the extensive sand dunes of San Francisco and the inevitable words tumble out of their pen. The barren dunes, they write, are as barren as desert, a barren wilderness of sand. The words barren dunes are as firmly wedded to each other as Adam and Eve, Hewlett Packard, and robber baron. But like the apocryphal story of Eden, the lifeless sandy wilderness is more poetry than fact. To naturalists willing to pay attention, the dunes of San Francisco have provided ample evidence that life is in fact diverse and even abundant in the seemingly barren piles of sand.

Writing in 1892, after more than four decades of intensifying human activities in the growing city, George Dunn found more than 50 species of beetles and mollusks in the dunes and strand along Ocean Beach. The great variety of vegetation found on the open dunes and in the more stabilized hollows and canyons provided habitat for many different species of animals, particularly invertebrates. The insect associates of Baccharis pilularis (coyote bush), a common plant of the dunes and other coastal shrub communities, are legion, supporting no less than 29 species of spiders, 7 mites, and 221 species of insects (of these, 56 are only loosely associated, leaving 165 species as its true associates). Several of these, including several abundant moth species that play a keystone role in the insect economy, are apparently specific to coyote bush.

The diversity of San Francisco's dunes included a few endemic species, that is, species that are limited in distribution to a particular region. The Xerces blue butterfly, for example, was restricted to San Francisco. Though its demise and eventual extinction following massive conversion of its habitat was documented, members of less charismatic insect orders may have shared its fate. We'll never know how diverse the dunes of San Francisco really were.

There are some records, though, that provide tantalizing evidence of its former diversity. Hans Herman Behr, Francis X. Williams, and others writing at the turn of the century documented the changes in the butterfly fauna of San Francisco, and others have followed in their footsteps. In the early 1950s Carlos Kaufeldt witnessed the development of the last extensive dune remnant in the Sunset and thankfully chose to document the insect fauna found there during its last summer as a barren dune. In recent years, Lisa Lacabanne has demonstrated that the diversity and abundance of certain insect guilds rose dramatically following native plant restoration and iceplant removal in the dunes above Lobos Creek at the Presidio--in the very valley where the Xerces blue butterfly was last seen.