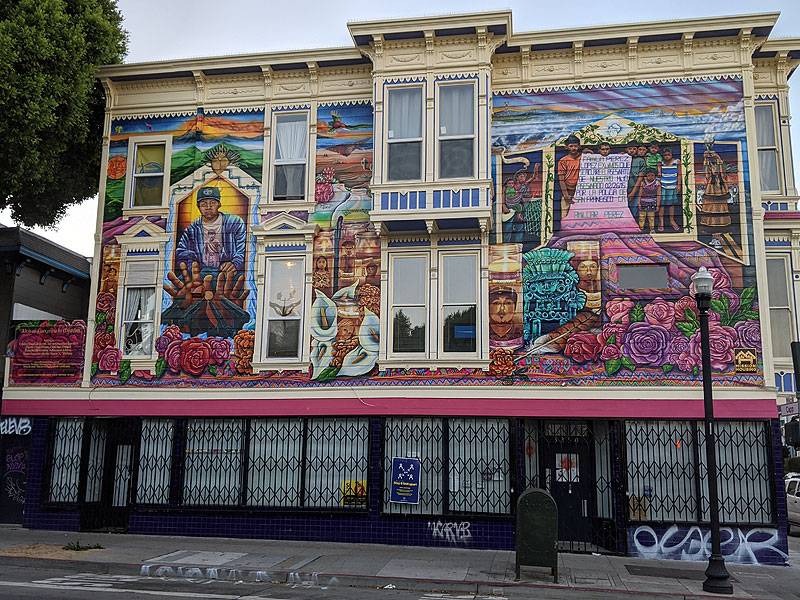 The full view from across 24th Street.

In 2019 Carla Wojczuk and Lucia Ippolito led a crew of wonderful community muralists in painting a stunning full-building mural at 24th and Capp Streets on a building owned by Mission Housing and with the streetside storefront rented by the Calle 24 Cultural District organizing project.

Titled Alto al Fuego en la Misión the mural honors multiple homicide victims, all killed by the San Francisco Police Department in the past few years. Prominently featured are Amilcar Perez-Lopez, shot in the back by undercover police on Folsom Street, Alex Nieto, shot down in a hail of 59 bullets after eating his burrito on Bernal Heights, Luis Gongora Pat, killed in less than 30 seconds while sitting on the ground on Shotwell near 19th... and quite a few more too.

From the press statement by the mural creators on its inauguration:

The mural is dedicated to Amilcar Perez Lopez, a 21-year-old Ch’orti’ Mayan immigrant from Guatemala, shot and killed by officers from the San Francisco Police Department on February 26th, 2015. Despite the Department’s initial claims the officers had fired in self-defense after Amilcar had lunged at them with a knife, medical examiners later revealed the officers had instead fired six shots to the back of Amilcar’s body as he was running for his life.

For almost five years, Amilcar’s killing has elicited widespread protests throughout the city and media attention throughout the world. Despite the subsequent failure of the legal system to hold the officers accountable for his murder, his family in Guatemala, and this community in the Mission in which he lived and died refuse to forget him and the others lost to police violence. 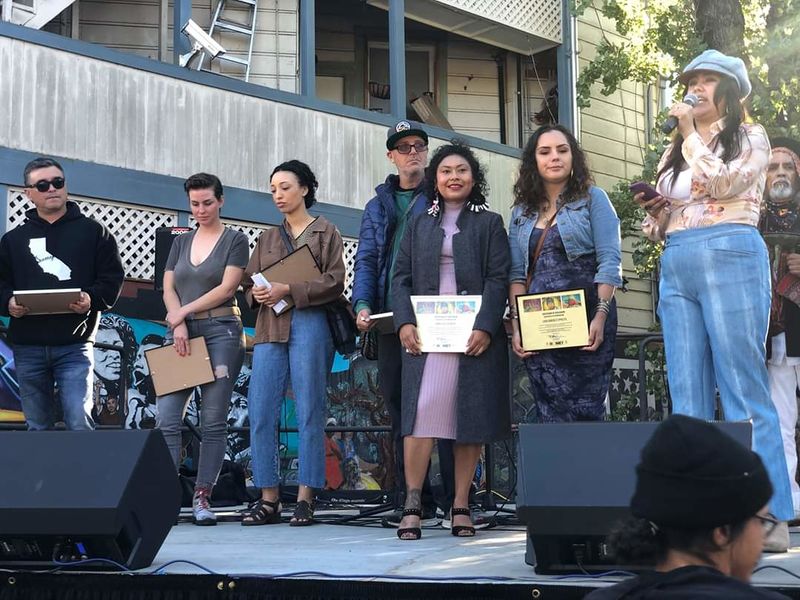 The muralists are honored at the unveiling. 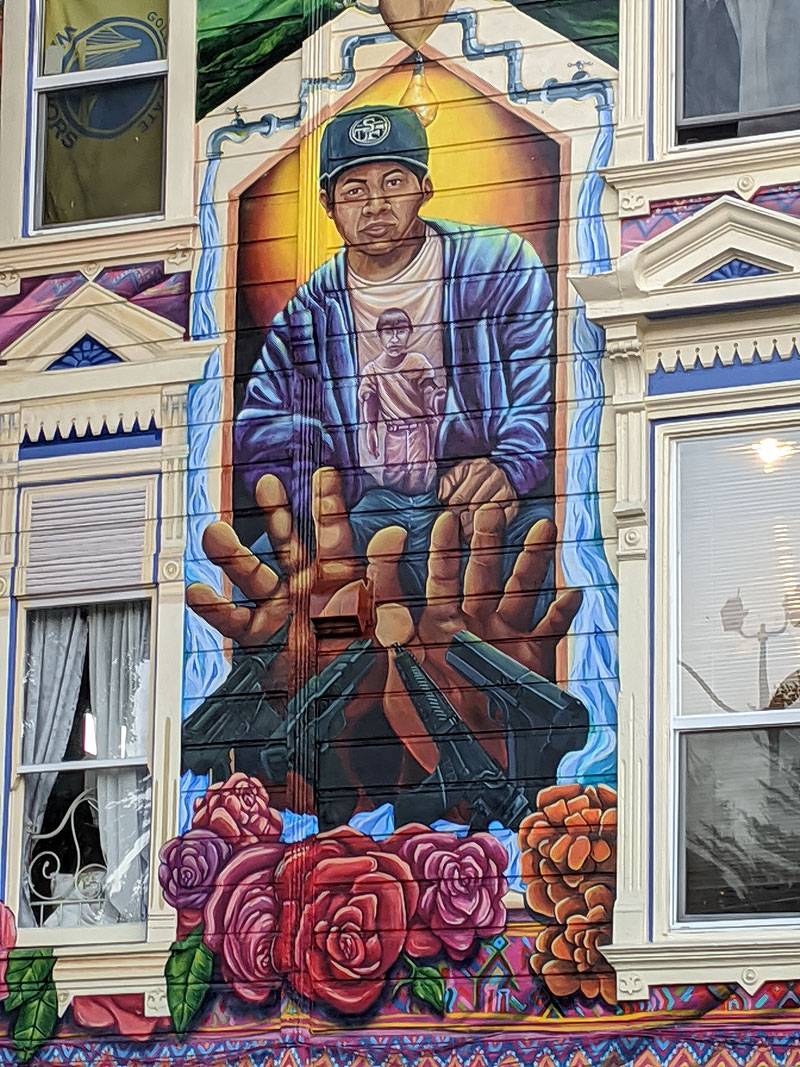 The detail on Amilcar Perez-Lopez, a Guatemalan immigrant laborer, whose family mourns him in their mountain village. 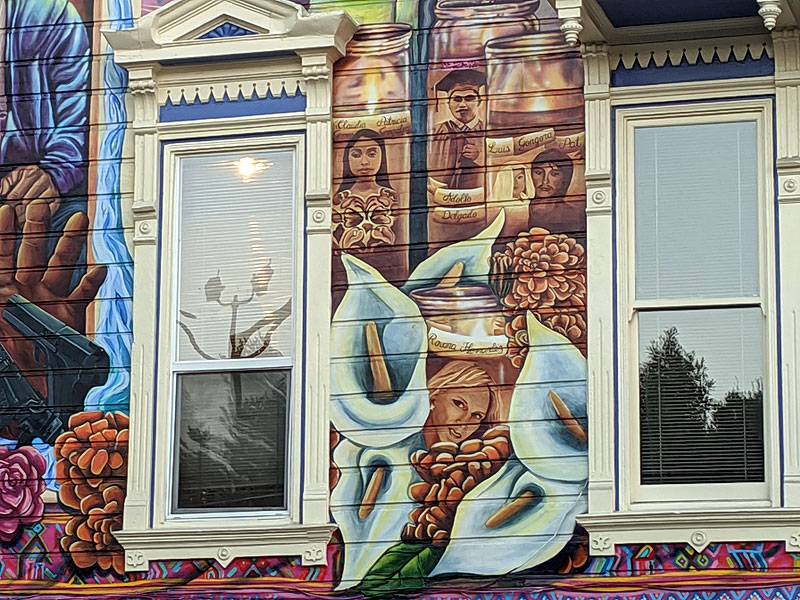 At right, Luis Gongora Pat; center, Alfonso Delgado (shot in a hail of police bullets while hiding in the trunk of a car); front and center: Roxana Hernandez. 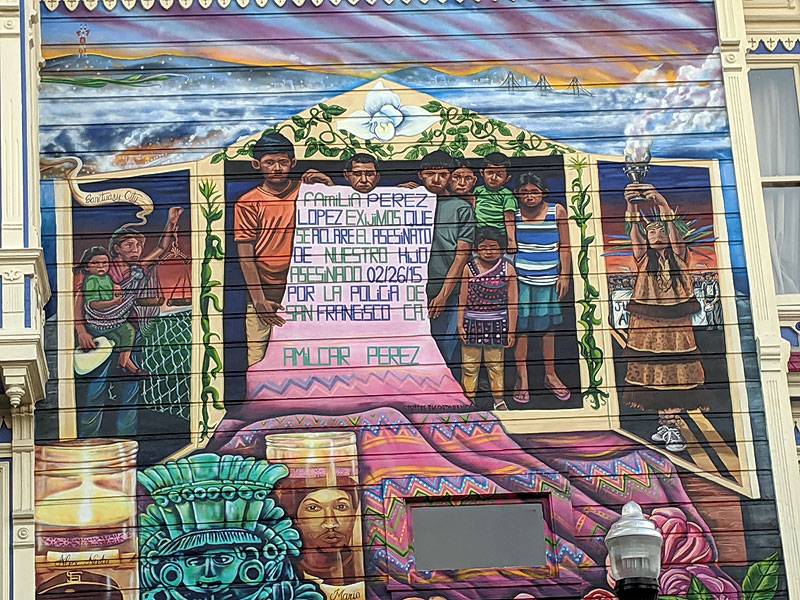 Based on a photo of Amilcar Perez-Lopez's family holding a banner demanding justice in their village. 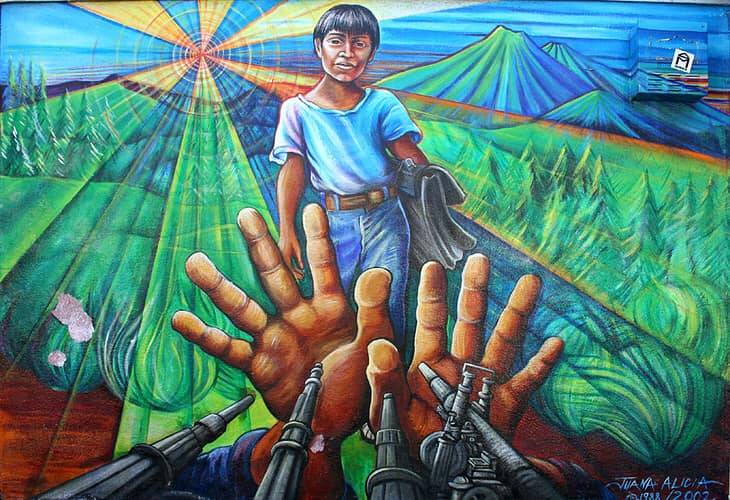 As is often true among local muralists, the Amilcar memorial is painted in part as an homage to an earlier work that was destroyed, Alto al Fuego, by Juana Alicia, decrying the wars in Central America in the 1980s.