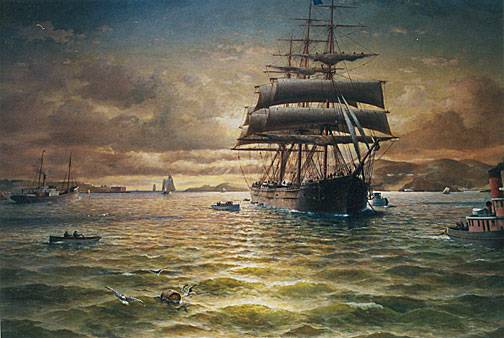 Down on California Street, in San Francisco's financial district, stands the old stone eminence of the Merchants Exchange Building, a gray granite island among high-rises of glass and steel. The building went up in 1903, promptly went down in the 1906 quake, and was stubbornly put back up in 1909. In the original trading hall of the Chamber of Commerce's marine department, there is a specially commissioned mural depicting the source of all their confident prosperity: shipping, which made San Francisco possible.

At the center of the main wall, high above the absent tellers' heads (in the now-closed bank branch) a panel shows a three-masted sailing ship being tugged towards us. A warm sunset gils the water, the sails, the sky, the Marin Hills, and the distant Golden Gate, unbridged: W.A. Coulter made the picture in 1909. It's title, Arrived All Well, refers to the note chalked on the board in this trading hall when a ship had come safely into port.

If you look closely you can see, ranged along the yardarms that branch out from the ship's main mast, more than a hundred dizzying feet above the deck, tiny men furling the heavy canvas sails after months of sea and wind. Their view of San Francisco must be very pretty in the late-day light.

In the plush Beaux-Arts interior of the trading room the crewmen are nearly invisible, just dots in a frame. Even so, the painting crystallizes two views: the sailor's view of shore and the landsman's return regard. These perspectives met in the thin strip of san Francisco that was its waterfront. 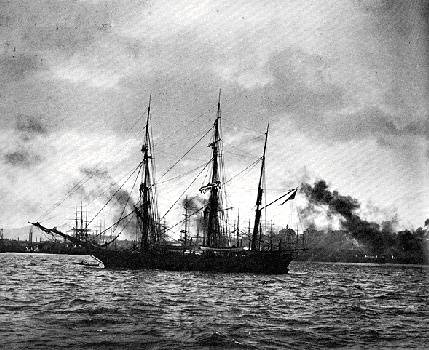 A sailor's view of pre-quake San Francisco was unique, and he paid for it in a different coin than today's Golden Gate Transit ferry customers, who traverse the postmodern maritime scene each morning. The sailor was part of an industrial work force, but his workplace, a square-rigged ship, was a singular object of great beauty, crafted and run with enormous skill. His official twelve-hour day was typical of the industrial revolution, but a ship needs manning on weekends, too; storms mock the time-clock; and the work itself is of a kind unrelated to any factory job, unpredictable, in locations exotic or hellish but in any case, remote.

A ship's apprentice at the turn of the century:

"If an apprentice knew his way about in Frisco he could do a good deal with a dollar in those days. Down on Third Street was a little eating-house where for fifteen cents you could get soup, fish, meat and a slice of pie. A feed every night of the week and ten cents left over! It was not a very high-class eating-house, of course. Cockroaches crawled over the floor, walls and tables. But then cockroaches crawled about the half-decks, too!

Then, too, there was that place that every apprentice who was ever in Frisco will remember:

"Clark's bakery on Kearny Street. You'd see dozens of apprentices there of a Saturday night, for ten cents would buy you a big cup of first-rate coffee and a whopping big doughnut, cream puff, slice of pie, or snail. Put down your dime, go to the long counter and help yourself. But Clark's burned up in the big fire after the earthquake, and Kearny Street is altogether different today ..." 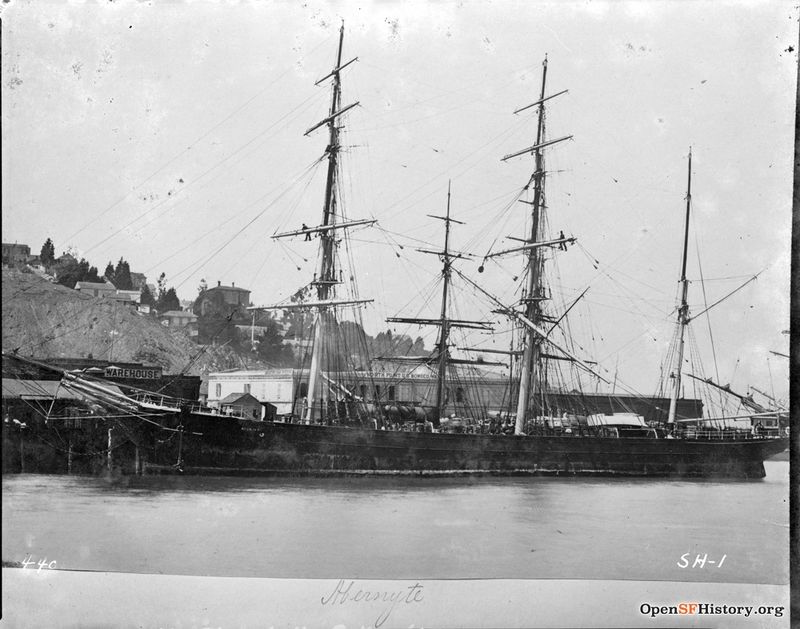 The Abernyte, a bark-rigged sailing ship moored at the foot of Telegraph Hill, c.1900.

Anecdotal moments like these are a whiff of the familiar: eating, drinking, smelling salt air or fetid garbage—they come across as pretty much the same in the past as today. For a moment, it's as if we experience an instant of history directly. That "as if" is of course deceptive; historians labor long and faithful hours to avoid reliance on the merely anecdotal in its apparent, but not always transparent, context.

Sometimes there's no choice: much of the waterfront's past is revealed only in anecdotes, or more broadly, anecdotal sources, by which I mean accounts that make a particular moment vivid by telling a funny story (or an outrageous or a grotesque one), or revealing an evocative detail, or indulging in an emotional outburst. One afternoon in the 1890s, Hiram Bailey and his friend Ben (neither one a sailor) went into a dive down on the waterfront:

Looking round we found ourselves in a rather coarse, and certainly common Battery Point saloon, kept by one Calico Jim, a Chilean as I subsequently learned. (This same gentleman some years later shanghaied six San Francisco policemen sent to arrest him; and was eventually relentlessly followed and shot dead by one of them on the streets of Callao in Chile, South America.)

We were about to return outside, not liking the general atmosphere of the place, when a tallish, high-cheeked, square-jawed adder-eyed, raw type of man arrested us with his silvery-toned voice:

Say, yoo two, ef yer want a lonesome conversassy, jest vamoos inter thet er room there. (He indicated a door at the opposite end.) Yooll sure be all possum in there . . . out of the bar-room heat and thet. . . . Jest ring fur yer poisons.

We sat down in that chair-spangled fatal room. Really it proved refreshingly cool; and through the window overlooking the harbour I noticed in the fading evening light several large and graceful sailing-ships: some deeply laden and at rest as if cut in cameo, whilst others, quite light, with their yards already cock-billed, were evidently preparing to proceed immediately up the Sacramento River to Crocket or Port Costa to obtain their grain cargoes for Europe. (Bailey 1934)

Did someone really dupe (or dope) six cops, all at once, put them on a ship, and get away with it? Was the man who spoke to Bailey really high-cheeked, square-jawed, and adder-eyed? A rich vein of unreliable history is mined by guys sitting around getting drunk, telling each other lies—which, however, are slathered onto a base of truth. Calico Jim figures in shanghaiing lore, and though his authenticity is disputed, his profession was real: he was a crimp, one who made a living by delivering men—via persuasion, trickery, or force—to sailing ships in need of crew.

from "About That Blood in the Scuppers" in Reclaiming San Francisco: History, Politics and Culture (San Francisco, City Lights Books, 1998)