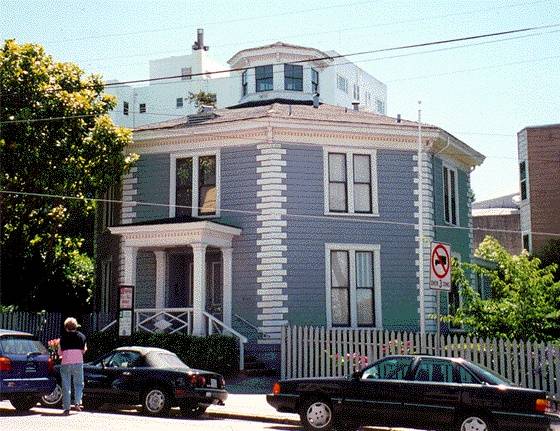 Octagon House/Museum, 2645 Gough St.—America in general, and San Francisco in particular, have always offered refuge to utopian dreamers and schemers. Inevitably, some of that madcap, hopelessly optimistic energy has bubbled over into architecture. Visionary builders from the ultra-rustic Thoreau to the mega-futuristic Buckminster Fuller have aspired to a total transformation of life by way of building and living in a totally new sort of house, a house designed on more "rational" principles than those underpinning more conventional abodes.

One of the least-known of these utopian architectural movements was the Octagon House craze of the mid-1850's. The idea, as espoused in Orson Squire Fowler's manifesto A Home for All, was to produce a perfectly "regular," "rational" design that allowed for each of the eight rooms on the house's two floors to receive maximum sunlight. The design features two floors, four rooms on each floor, for a total of eight rooms and sixteen window-openings harboring thirty-two windows with sixty-four panes—a perfect logarithmic expansion based on powers of two. In this sense, the house is exceedingly "rational" —built on a constant ratio of one to two, two to four, and so on. But whether it is "rational" to wish to build such a perfectly "rational" house is another question.

Though there may once have been as many as five Octagon Houses in San Francisco, only two remain. This one was built by William C. McElroy in 1861. It has been designated San Francisco Landmark #17.

The other is on Russian Hill on Chestnut Street. 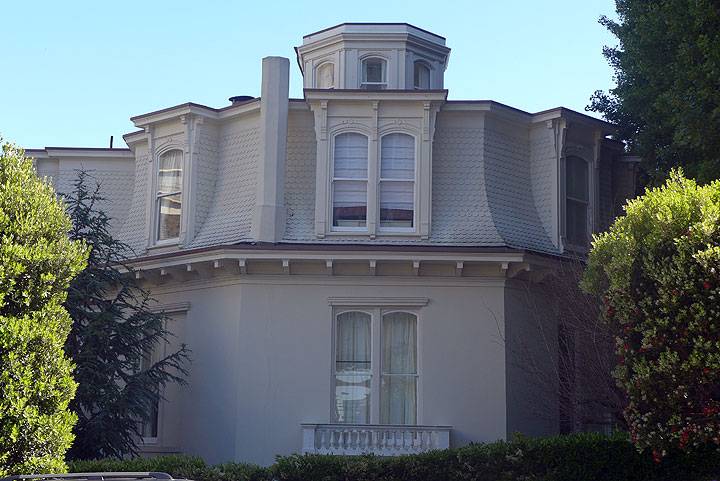 One of five such houses in early San Francisco, this octagonal house was built by William C. McElroy in 1861. Mr. McElroy's letter, "To Future Ages," and newspapers accompanying it, which were discovered in a tin box under the stairs during restoration, are displayed in Octagon House.

In 1951, when The National Society of The Colonial Dames of America in California acquired Octagon House, it was across Gough Street from its present location. Vacant for many years, it was in a state of disrepair and fortunately the Society's offer to its owner to move and restore it was accepted.

Funds were raised and Octagon House was moved to its present site, property donated to the Society by two members, the Misses Edith Winslow and Lucy Helen Allyne. The late Warren C. Perry, F.A.I.A., former Head of the Department of Architecture at the university of California, directed restoration. The cornerstone was laid on April 7, 1953.

In 1968 Octagon House was designated an Historical Landmark by the City of San Francisco, and in 1972 it was placed in the National Register of Historic Places. In 1993 its garden received a special award from San Francisco Beautiful.

The collections on display at Octagon House represent decorative arts of the Colonial and Federal periods. Included are examples of American furniture, portraits, samplers and looking glasses; English and American silver; American pewter; English and Chinese ceramics; and Oriental rugs.

Octagon House is open to the public on the second Sunday and the second and fourth Thursdays of each month except January and is closed on holidays.