A Half Century of Lies

Thousands of Fillmore residents lost homes and businesses to redevelopment - and were promised a chance to return. 50 years later, Leola King is still waiting 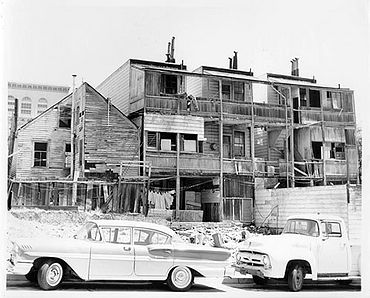 Leola King has lived your life, the lives of three friends and then some.

She's traveled to Africa with the legendary entertainer, Josephine Baker. She's featured jazz great Louis Armstrong at a popular Fillmore nightclub she helmed in the 1950s called the Blue Mirror, where she also once convinced a roomful of patrons to drink sweet champagne from the heel of her shoe.

Most of all, Leola King has come as close as anyone possibly can to experiencing bureaucratic hell on earth. For half a century, she's been fighting with the San Francisco Redevelopment Agency, which has taken four pieces of her property, wiped out a restaurant and two nightclubs she owned, and left her with a string of broken promises.

Her story is evidence that the ugly local chapter of Western Addition redevelopment history still isn't over - and it's a demonstration of why so many African Americans in this town will never trust the Redevelopment Agency.

Beginning in the 1940s, King - a native of Oklahoma - successfully operated a series of restaurants and nightclubs in the city, remarkable enough in an era that imposed a double-paned glass ceiling on black, female entrepreneurs.

"Back when I first moved onto Fillmore, it was very popular," King told the Guardian. "Market Street didn't have shit. 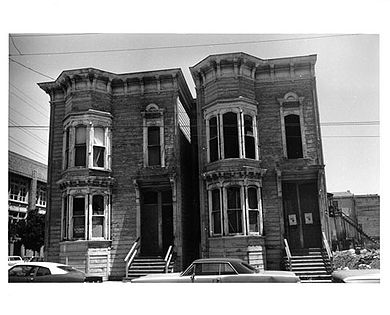 During the height of King's accomplishments, the Redevelopment Agency infamously launched an ambitious project to clear out "blight" in the neighborhood. It was part of a nationwide urban-renewal trend, and while the project here still won't be finished until 2009, it's widely regarded as one of America's worst urban-planning disasters.

In theory, Western Addition residents who were forced to give up their homes or businesses were given a "certificate of preference," a promise that when the sometimes decaying buildings were turned to kindling and new ones built, the former occupants could return.

In practice, it didn't work out that way. An estimated 5,500 certificates were issued to families and business owners shortly before the second phase of Western Addition redevelopment began in 1964. Only a fraction of the certificates have benefited anyone. The agency has lost contact information for more than half of the holders, and redevelopment commissioners now openly admit the program is a joke.

King obtained two certificates, and later attempts to redeem them both devolved into costly legal wrangling with the agency that lasted more than two decades. She has never regained what she lost. 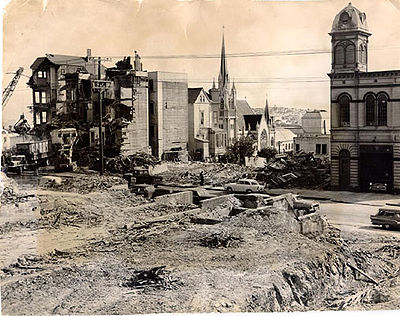 King insists that she's just 39 years old, but public records put her closer to 84. She first landed in San Francisco in 1946 and eventually started a barbecue pit at 1601 Geary near Buchanan, building inspection records show. She called it Oklahoma King's, and hungry San Franciscans were lured to the smell of exotic buffalo, deer and quail meat.

By 1949, however, Congress had made urban renewal federal law with the goal of leveling slums – and cities had the right to seize property by eminent domain if necessary.

The first Western Addition redevelopment zone was known as A-1 and included Oklahoma King's. King was paid approximately $25,000 for the property, but offered no relocation assistance or other compensation for the revenue she lost as a result of ceasing her day-to-day business.

Forging ahead, in 1953 she opened the Blue Mirror, at 935 Fillmore Street. Decorated with molded Greek figurines on the walls, a circular bar and velvet festoons, it became a hub of jazz and blues entertainment. King spent a year hopping onto buses full of tourists and begging the driver to drop them by her nightclub for a drink. Before long, her brassy personality had attracted world-class performers, each of them adding electricity to the club's reputation.

Bobbie Webb backed up B.B. King, Little Willie John, T-Bone Walker and others as a young saxophonist at the Blue Mirror with his band the Rhythm Rockers.

"[King] didn't only have a personality" said Webb, who now airs a show Tuesdays on 89.5 KPOO, "she was a beautiful lady. Personality just spoke for itself. All she had to do was stand there."

But like virtually everyone in the neighborhood at that time, King rented the place where the Blue Mirror operated. Redevelopment again reached her business in the early 1960s, and she was kicked out with no compensation.

"Whenever I'd lose something, they'd say, 'Keep on moving. Don't stop, because you'll lose your customers. When you open back up, they won't know who you are.'“

Two more commercial and residential properties she owned on Post and Webster streets were also eventually taken by redevelopment. 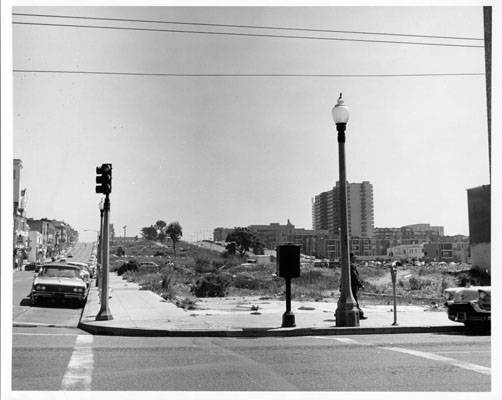 Vacant lots between Post and Geary in Redevelopment Zone A-1, August 1964.

King opened the Bird Cage Tavern at 1505 Fillmore St. in 1964 near O'Farrell complete with a jukebox, 30-foot mahogany bar, a piano and a gilded birdcage. Then-police chief Thomas J. Cahill tried to block her liquor-license renewal by complaining to the state about "winos" and "prostitutes" in the neighborhood, records show, but regulators dismissed the claims.

Despite a triumphant resettlement, the Redevelopment Agency arrived yet again and bought her building before evicting all the tenants in 1974 during the expansion of its A-2 redevelopment phase. This time King stood fast and had to be forced out by the sheriff.

She spent the next 25 years quarreling with the agency over relocation terms. The Bird Cage's furnishings were destroyed when the agency amazingly chose to store them on an outdoor lot off Third Street during King’s move, a fact later confirmed by an agency employee in an affidavit.

Her battle, laid out in hundreds of pages of documents reviewed by the Guardian, was frustrating – and ultimately useless. Each step of the transition involved a new round of negotiations, letters, legal threats, and bureaucratic backbiting. By 1997 King had defaulted on several loans and fell behind on her taxes. Except for an apartment building of 12 mostly low-income units where she lives today, she lost all that she owned, including an Edwardian landmark home on Scott Street near Alamo Square and a half-completed bar she called Goldie's. 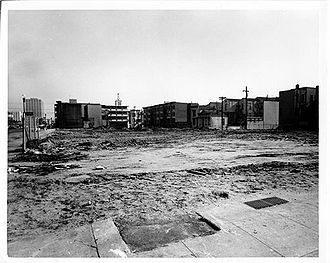 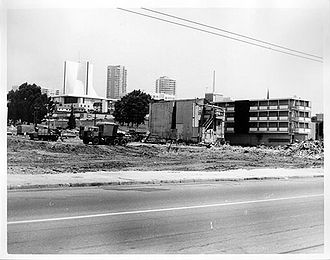 “The thing took on a life of its own,” said Gary Cohen, who worked as an attorney for King during the bankruptcy periods and now lives in Washington State. “It as like an onion. Layer and layer after layer . . . it just kept going from bad to worse.”

With such a sordid history, it's no wonder residents of Bayview-Hunter's Point, many of whom escaped Western Addition "renewal" in the first place, are leery of a pending years-long plan to redevelop nearly 1,500 acres in the southeast neighborhoods.

San Francisco Bay View newspaper publisher Willie Ratcliff led a petition drive last year in an effort to put the plan before voters. Over 20,000 petition signatures were certified by elections officials, but City Attorney Dennis Herrera ruled the petitions were technically invalid because circulators hadn't presented the full text of the redevelopment plan to signers. Redevelopment foes have since sued to have Herrera's decision tossed.

"The misuse by these people is just unbelievable," King said. "They were fighting me every inch."

For a longer version of this story, see A half-century of lies