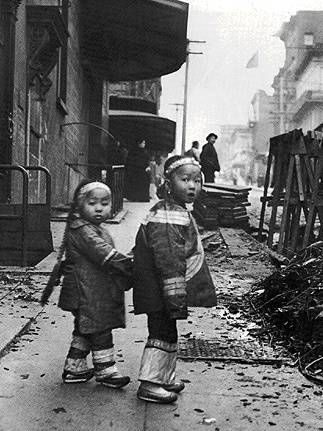 The German-born photographer, Arnold Genthe, once made a living with his photographs of Old Chinatown. In the late 19th century, as a young man, Genthe regularly descended Nob Hill, sauntered back and forth across the length of Dupont Street (present day Grant Avenue), and photographed Old Chinatown's busy inhabitants. He was continually struck by the alien quality of the place and its people, and despite (or perhaps because of) the pervasive abjection, the crowded quarter became for him a space of authentic cultural contact. He was not, of course, alone in believing this; and his pictures, which tried to give photographic detail to the street-level hubbub of the neighborhood, fed the appetites of a like-minded patron class (Lee 1995). By the turn-of-the-century, the energetic Genthe had accumulated some 200 glass negatives and lantern slides, and after Old Chinatown's destruction in 1906, his pictures became perhaps the most complete record of its past life. Selective and deracinated as they were, the pictures were soon assembled, narrativized, and released as a certain kind of documentary effort. They went through three well-received editions and continue today as an (invidious, to some) historical tableau (Lee 1996). They helped to shape the image of Old Chinatown and, just as importantly, provided a basis with which to gauge the development of the new. 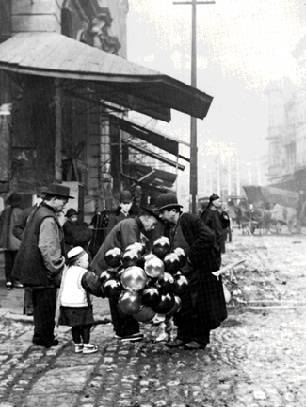 A Jewish merchant sells balloons in Chinatown in this Arnold Genthe photograph.