A FORCED MARCH TO NOWHERE

Originally published in Street Sheet, May 1996 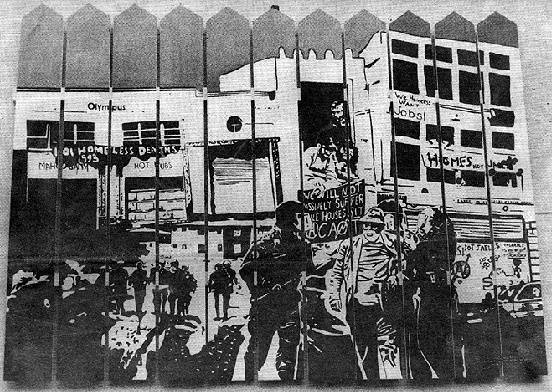 Photo by Jason Albertson, from Street Sheet, May 1996

"Same here. I couldn't find anything in this City. They just don't want us here."

We were all sitting in the relocation office at the Hayes Valley North housing projects. Mothers were coming into the office arranging the last details of their imminent departure, after years of living in demeaning prison units masquerading as family housing. While their homes were being boarded up, predominantly white, middle-class residents who had gentrified this neighborhood looked on. I was worried about my sisters, these fierce warrior mothers struggling to raise their children in poverty. They were beginning a forced exodus to uncertainty.

The destruction of San Francisco's public housing units is a blatant endeavor to systematically remove low-income, African-American families from the City. Despite the promises to residents that they will not be pushed into the steets, families are being handed Section 8 certificates which will soon be useless. As HUD is dismantled by the Republican-controlled Congress, Section 8 and other subsidized housing programs are set to expire. In a few years, these mothers and their children who were moved out of the housing projects will hold expired Section 8s, with no place to go. In the meantime, San Francisco will have effectively completed its gentrification of the Western Addition and will have eliminated the sore sites of African-Americans' poverty.

The City contends that the housing projects targeted for demolition will be rebuilt. However, there is no promise of one-to-one replacement for every housing unit destroyed. In fact, the number of units that will replace the existing projects will leave an overall deficit of 315 units for extremely low-income familes. And of the renovated units, many will be converted to house higher income levels, thus excluding families living below the poverty line.

Families will leave the housing projects with Section 8s that have a limited period of viability, and only a few mothers and children will be able to return to the newly-redeveloped apartments. The rest of these families will be unable to find other affordable housing options. Their destiny will be East Oakland, or the streets and shelters of San Francisco.

The elimination of public housing units is especially shameful because affordable housing for families is nearly non-existent in San Francisco. In the last five years, only 2% of supportive housing developments built in the City were marked for low-income families. Even the rat-infested hotels of Sixth Street are too expensive for an AFDC family living on $490 a month. A mother on AFDC, living at 15% of median income level, simply has no place to live in San Francisco.

In fact, of the 122 families living in the housing projects of Hayes Valley North and the 456 families residing in Geneva Towers, one-third took their Section 8s outside of San Francisco. After years of living here--attending neighborhood churches, sending their children to San Francisco schools--low-income, African-American families are forced by the lack of housing options to seek better alternatives across the bay. Undoubtedly, more families from the other projects marked for demolition will choose to leave the City in order to make a better life for their children.