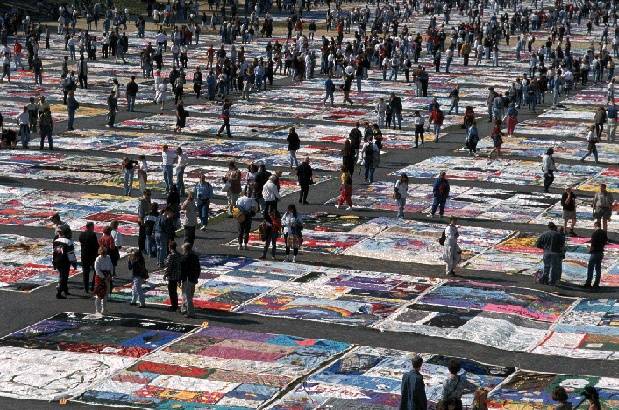 In the 1970’s, thousands of gay men flocked to San Francisco’s Castro district to embrace their newfound sexual freedom. Unfortunately, within a decade, nearly half of the city’s gay community had been lost to AIDS (SF AIDS Foundation). The AIDS crisis in San Francisco profoundly affected the LGBT community of the city, shown not only in the response within the community, but also the in long term effects the disease had on the Castro. National misconceptions about the disease itself contributed to the need for an “inside out” approach to tackling the AIDS crisis.

For this reason, much of the activism and educational programs came from within the LGBT community of San Francisco. The reaction to the AIDS crisis from the lesbian and bisexual communities was swift and effective. Below is an example of one of the ways in which this occurred. The image is a poster which was placed around San Francisco, specifically in the Castro district, which promotes a Women’s Day Blood Drive going to occur in the Castro and urges lesbian women to donate blood to the gay men affected by AIDS. There is a strong sense of solidarity in the language used. This is visible in the use of terms such as “our community”, “our sisters and brothers”, and “our PWAs”. In total, the word “our” is used five times in the poster, showing how the AIDS crisis brought the LGBT community together. Additionally, the bottom of the poster shows that the drive is a project of the Harvey Milk AIDS Education Fund, a project with its roots in the LGBT community. 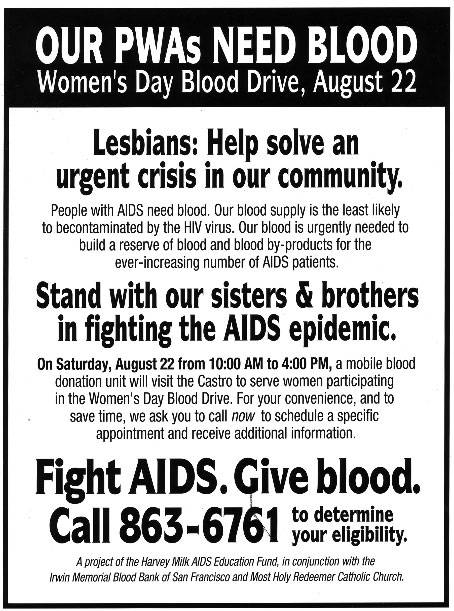 Lesbian blood drives as community-based activism in the 1980s.

Contributing to the stigmatization of AIDS was the way in which the disease was portrayed in the press. An early article on the topic was a 1981 New York Times’ article entitled “Rare Cancer Seen in 41 Homosexuals” (Altman). There are many statements in the article which we now know to be false, starting with its title. Not only is the disease not a cancer, but it also is not limited to the homosexual community. The article discusses how AIDS was spreading in the San Francisco Bay area. At one point, Altman states that most AIDS cases “involved homosexual men who have had multiple and frequent sexual encounters with different partners, as many as ten sexual encounters each night up to four times a week” (Altman). In addition to being a severely flawed analysis, this statement paints AIDS victims as sexually promiscuous deviants. Additionally, a doctor interviewed in the piece said , “there was no apparent danger to nonhomosexuals from contagion” (Altman). This statement succeeds in two regards: establishing a false sense of distance between heterosexual America and the disease and spreading false information about the contagiousness of AIDS. The article certainly does not encourage sympathy for those infected with the virus, inevitably affecting how the nation viewed the disease, which both highlights how little mainstream America knew about AIDS and well as likely contributed to the lack of an effective or timely response to the crisis in San Francisco.

Roberta Bobba, longtime owner of Jug's Liquors at Market and Church, as well as a number of other establishments over the years, interviewed in 2018 at her apartment in Alameda, and Molly Martin, interviewed in early 2019 in San Francisco, offer contrasting memories on the impact of AIDS on their lives, on the lesbian community, and San Francisco.

The AIDS outbreak had a serious impact too on the spaces utilized by the gay community, particularly in the Castro, a district which a large proportion of the city’s queer community historically have called home. Thanks to fear and uncertainty surrounding the cause and contagiousness of AIDS, rash decisions were made in order to contain the disease. Unfortunately, these decisions had adverse effects on the Castro neighborhood. Businesses in the district lost business because heterosexual San Franciscans were scared to mingle with and use the same resources as homosexual men for fear of contracting the disease (Sides 2001). A great example of this is the closing of bathhouses around San Francisco, as explained in a 1987 article in the LA Times entitled “Last Gay Bathhouse in S.F. Agrees to Close Its Doors”. Before the AIDS outbreak, bathhouses for the gay community were places of social gathering and often, anonymous sexual activity. The bathhouses were forced to close because they were violating a 1984 court order which required businesses to “ban sexual activities that could spread acquired immune deficiency syndrome.” (DeBare) In the article, Laurie McBride, former president of a gay business association, is quoted as referring to the bathhouses as "a symbol of gay liberation." (DeBare) The removal of a type of business that was such a critical social location for the gay community was tragic for the Castro district, as the article calls it, the “end of an era.” (DeBare) 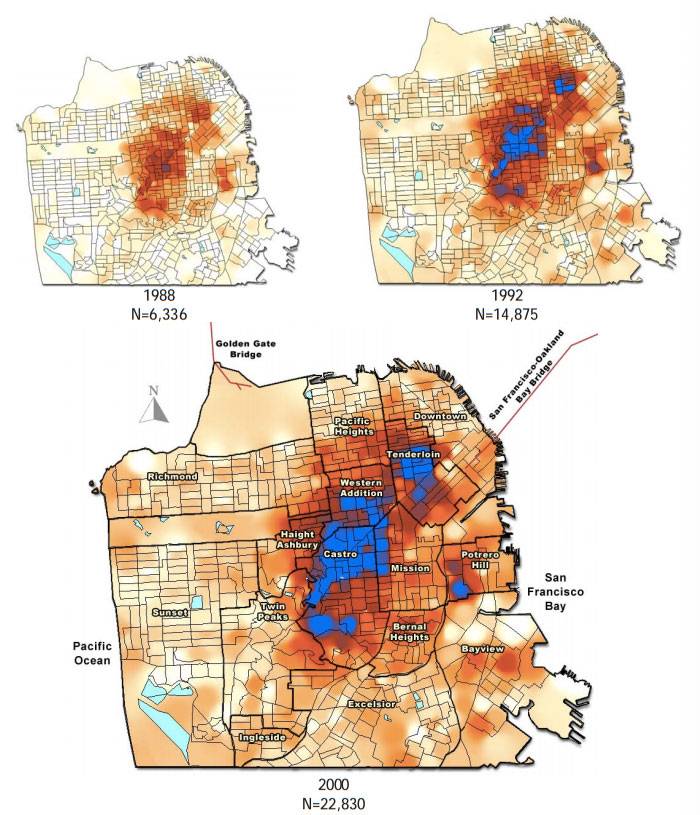 These maps showing AIDS infection rates from a report done by the City of San Francisco’s Department of Public Health on HIV/AIDS in San Francisco between 1981 and 2000 show the lasting effect of the AIDS crisis on San Francisco’s LGBT community and the spaces it occupied. The first map shows AIDS distribution in 1988 and the following maps track the same data to 2000. Despite a strong pocket of AIDS victims in the Tenderloin district which can likely be attributed to spreading through needles and drug use, as you can see, the Castro remains the epicenter of AIDS infection in San Francisco. As previously explored, the Castro district has long been home to a gay community. Throughout the recent decades, the AIDS community remains strong in the Castro.

According to the HIV Epidemiology Annual Report 2015, 60% of HIV positive people in the Castro are over age 50, showing how the effects of the AIDS epidemic of the 1980s live on in the Castro district. One possible explanation is there is strength in numbers and infected gay men prefer to remain in the presence of those in a similar position as them. These maps show how much AIDS still pervades the Castro district, and that AIDS has played a critical role in the development and evolution of the Castro. 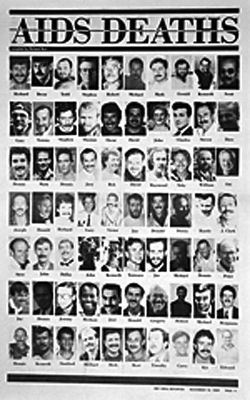 Throughout the AIDS crisis, the Bay Area Reporter (B.A.R.) documented the tragedies and the activism that surrounded the AIDS crisis. The image above is the cover of a December issue of the paper. Because of all of the deaths from AIDS within the San Francisco gay community, the obituary section of the paper often found itself overloaded. In a powerful cover story, the newspaper decided to run pages upon pages of just the faces of the men lost to AIDS in the past year. The piece is moving for various reasons. The portraits are all smiling faces and below the photos are just the first names of the men lost. The use of only the first names creates a sense of familiarity. Within the LGBT community, these lost men were their friends, their family. The images provide a poignant testimony of the profound loss felt by the community.