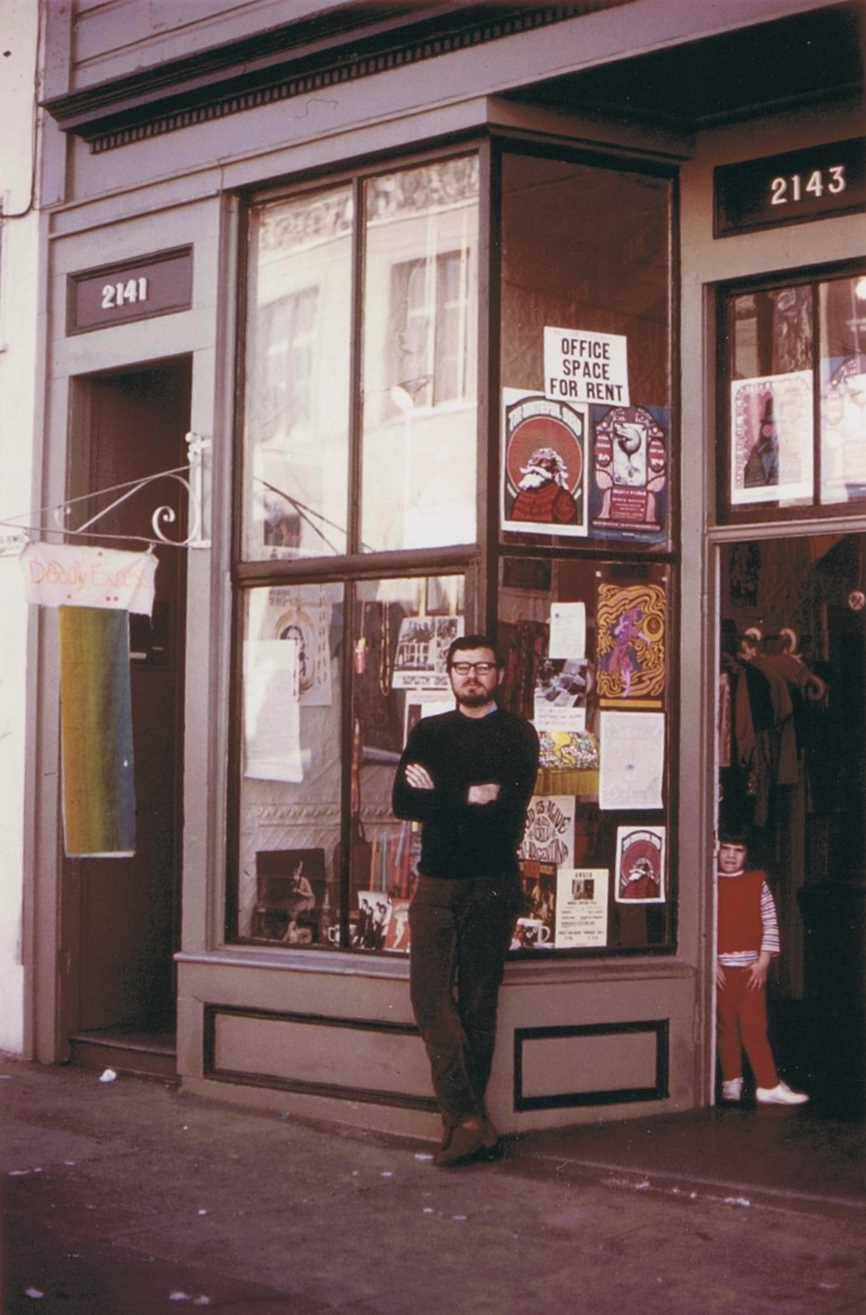 Doyle Phillips in front of 2143 Powell, "The Deadly Excess". The mother of the little girl standing in the doorway shot this picture. They lived nearby and Phillips would babysit whenever the mother had to dash away on an errand. 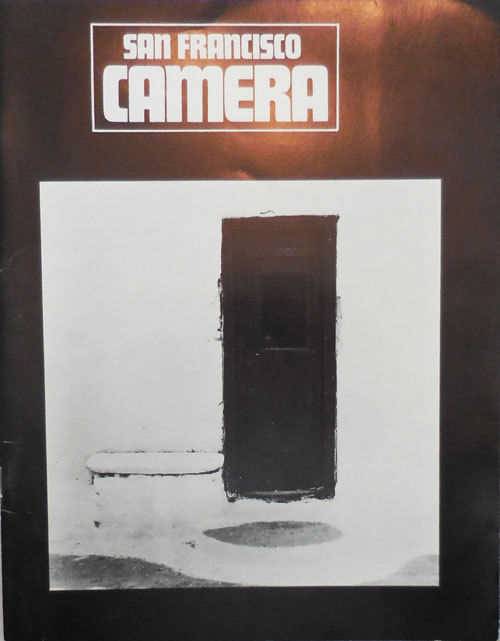 Around the autumn of 1966 I moved into 2141 Powell and occupied the apartment directly over 2143. I was the only tenant in the entire building for several months. Shortly after moving in I had an accident that ended my publishing venture. While recovering I decided to begin work on a new magazine, San Francisco Camera, and so rented the vacant store space at 2143 to use as the office. 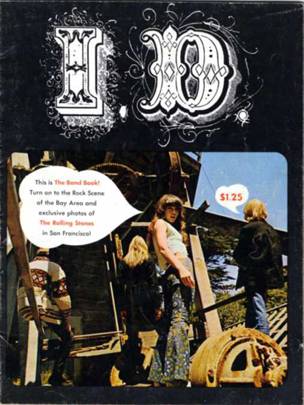 During the time I was producing I.D. Magazine—the first rock magazine in San Francisco—I had met many Bay Area photographers and therefore the office evolved into a showcase for photography. Since I also knew many of the Avalon poster artists the place also became a poster gallery. 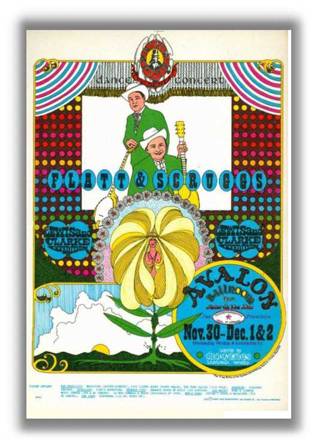 A poster designed by Phillips while living in 2143 Powell.

John Lennon tagged The Daily Express newspaper as "The Deadly Excess", thus the name for the gallery/shop at 2143 Powell.

Almost before I realized it many other items added to the inventory and shortly The Deadly Excess became as much “psychedelic shop” as art gallery. Hours of operation were erratic, which means I would sometimes open around 3pm on whatever day or frequently at night the hours might begin at 11 pm or 12 am and go well toward dawn.

It was especially at night that interesting people might come in out of the cold fog. My part of North Beach was an old Italian working-class neighborhood so the visitors were surprised to find a place like the Deadly Excess with lights on. (See below for a partial list of people who wandered in.)

My landlady was very nice and to help her rent the building I would show possible tenants the upstairs apartments and the couple of other office/studio spaces on the street level. I think the first tenant was Willie and his partner who had a camera repair shop in the interior behind The Deadly Excess.

One late night a visitor came in and was astonished by what he beheld. He praised and appraised the contents so enthusiastically that I thought he was kidding me. “I must make my next film here,” he said. I replied half-jokingly, “If you think this is a great set, take a look at the cellar.” With a flashlight I showed him the dirt floor covered with Prohibition boot-leg bottles and every inch of the place hung with spider webs. “I must live here, in this building,” he said. And so the underground filmmaker Kenneth Anger became a tenant in the apartment next to mine on the second floor. Many Beats came to visit him and would look in the Deadly Excess.

Maybe in April of 1967 two Vice Cops came in and told me to remove two photographs in an exhibit by the photographer Bill Brach. I politely declined to comply. They advised me that they would be returning to this matter and a few days later four squad cars parked in front of the Deadly Excess and uniformed police stripped the contents into the vehicles—and gave me a ride to jail. In their opinion I was guilty of “Displaying obscene photographs and thereby contributing to the delinquency of minors.” The chief of the Vice Squad Saul Weiner supervised the arrest. 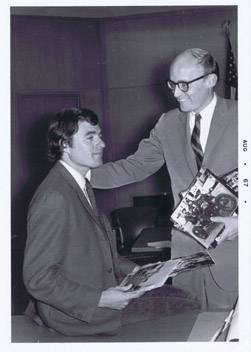 The jury disagreed with Saul. They loved my lawyer and me and after the acquittal all the jurors shook hands with us and apologized for the cops’ trumped-up charges. 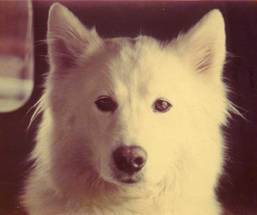 Other tenants of 2141 and 2143 were Hugh Harpole (photographer), Ed and Joe (painting students at the San Francisco Art Institute (SFAI)), Rodger Dunham (artist), and my dog Missy who was beloved by the whole neighborhood, including a demented old sailor who lived on the corner and had a thing for female animals.

About the end of 1967 I moved my dwelling to Jones Street, alongside the San Francisco Art Institute. Before I went to Jones Street the German artist Satty had visited the store and it was not long after I closed the Deadly Excess that he established his studio there. 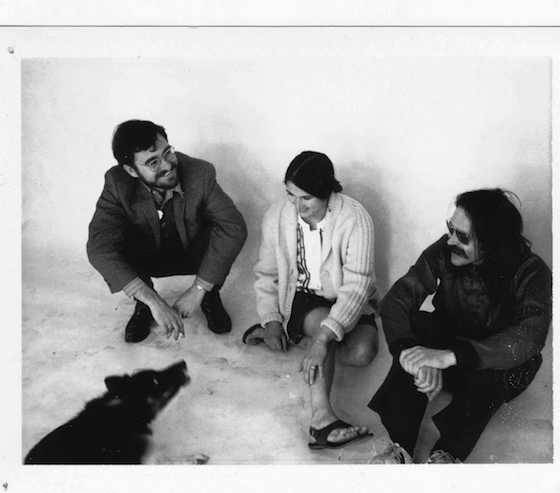 L to R: Doyle Phillips, Judy Dater, Jerry Burchard, discussing the second issue of San Francisco Camera. Judy had been much involved with the magazine's first issue from her position at San Francisco State and Jerry was head of photography at SFAI. Judy's doggie Sasha was a pup of Missy.