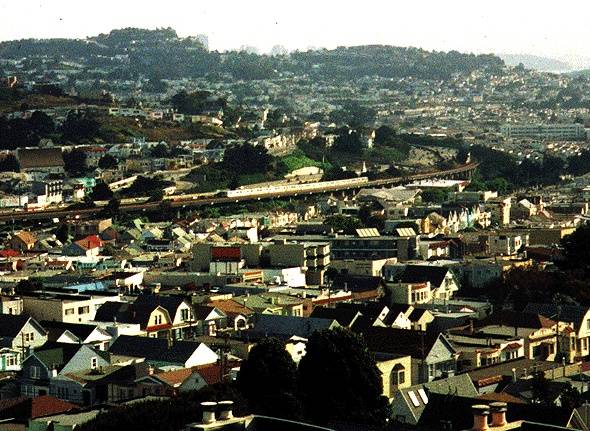 The BART strike turned up the pressure on what was already a smoggy September in the Bay Area. Daily newspapers slammed the "greedy" strikers, claiming that they were already pulling in over $40,000 a year, while tens of thousands of workers around the bay found their workdays extended by 2 hours at both commuting ends as they tried to make do without the essential rail artery. Many people couldn't help but get angry at the BART workers, given their relatively good wages and easy jobs compared to the common under-$10-an-hour jobs held by most. At least this was the story repeated ad nauseum by the entertainment/"news" companies. BART's bloated management salaries and top-heavy bureaucracy, combined with incessant and unnecessary expansion projects which run up billions in annual expenditures (and forced a 45% increase in fares in the past 3 years) all disappeared from the public eye as the wrath of the corporate media was directed at the "greedy" strikers.

No one has examined how few options were left to the workers, in part because of their own subordination to the institutional dynamics of public transit. Between the hysterical propaganda against the strike, the growing anger of the public, the intransigence of the BART board, and the structure of their own union and the collective bargaining process itself, what else could they have done? And in the end, they got the money they sought, so as far as BART workers are concerned, it may have been unpleasant to be the object of so much abuse, but they won!

The working class, however, suffered another ignominious defeat in the BART strike. Who pays for the settlement, and who pays for BART in general? The users and the residents of the areas through which it lumbers... If the BART workers were interested in gaining some real class-wide solidarity, their cause would have been far better served, and the strike would have been over in an hour or two, if they had merely continued to run the trains BUT REFUSED TO COLLECT FARES! Of course, BART's hated and idiotic fare collection system, which must waste thousands of human hours per year as we all struggle to feed paper money into its recalcitrant jaws, is really designed to prevent this kind of working class solidarity. With one station attendant at each gate area at most, a fare strike would be easily stopped by police intervention, unlike the MUNI, which is still designed to give the driver discretionary power over fare collection. Automated fare systems clearly have nothing to do with convenience or public service, and everything to do with pre-empting working class solidarity over the fare box and other types of popular resistance to unjustified and unnecessary fares.

BART workers could have promoted a class solidarity by contesting the direction of BART, resisting the absurdly wasteful expansion to the SF Airport, and insisting on integration with Caltrain, MUNI and other transit systems. But the unions are as afraid of that kind of larger political agenda, and in the case of BART unions in particular, the gravy train is pretty tasty, so why rock the boat? As BART commandeers more and more available transit funding in the Bay Area, there is more for BART workers, too, which is good for the bottom line of the unions that represent them, and their well-paid executives.

The embrace of bike commuting and self-propelled alternative transit was conspicuously absent from news reports on the BART strike and people's attempts to cope. If six hardy souls hadn't ridden across the Bay Bridge during an evening commute, getting arrested and charged (briefly) with felonious conspiracy (within two days all charges were reduced to a traffic infraction), bicycling may have never been mentioned during the BART strike.