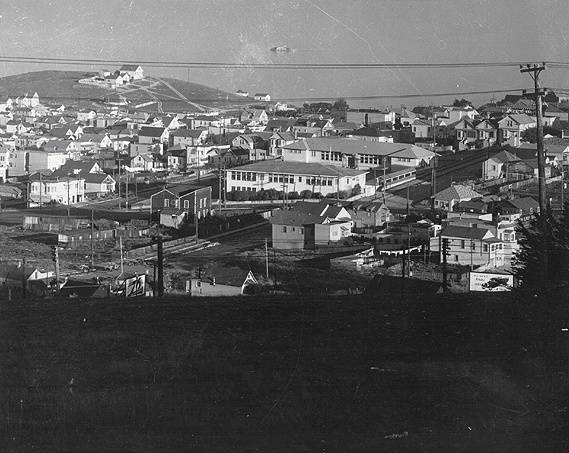 Eastern view across the Bayview district in 1937.

Our tiny corner of the Bayview was a miniature melting pot, represented the ethnic makeup of the area [during the 1920s]. No single group dominated as in Chinatown or North Beach. Listing the names of families in my immediate neighborhood, of the children we played with, will tell the story.

Le Conte Avenue was a short street, starting at the corner of San Bruno Avenue on the west and ending at Third Street on the east. On only one block—the western portion—were there houses, less than a dozen of them. Three were clustered at the corner of San Bruno. In the first lived Alexander Sanchez and his parents who were from the Philippines. Next door was the Lunardelli family consisting of the parents and their sons: Peter who attended Bret Harte with us and his adult brothers Italo and Inocho. The third house, a newish building of stucco, was occupied by Verna Michaelson, her mother (a Dane) and her stepfather, Mr. Borg, a Maltese. A huge grassy empty lot separated them from the last house on that side of the block where the Werner’s, Mr. and Mrs. and their boys, Henry and Robert. (They later moved to Woolsey Avenue in the Portola District and were replaced by “Babe” Werner’s sister, Millie Schmelter, her husband and their two older children, Marie and Johnny. (These two represented glamour for us younger kids. Tall and slim with steely blue eyes, Maria dressed in the latest fashion; her brother, big and blond, played football at Balboa High.)

On our side of the street and across from the Werner’s we and the Zarosi family lived in identical houses next to each other, separated by big yards. Mr. Zarosi was from Romania, his wife American of Scottish descent; their two daughters, Virginia and Pauline, matched my sister Anita and me in age. Our household consisted of my father , Assyrian,born in Urmia, Persia, and my mother, an Armenian, survivor of the l9l5 massacres.. The family grew to include four girls and one boy: Ruth (baptized Rhodope but changed to the American name at the suggestion of a Swedish friend), Anita, Lily, Haig and Violet.)

Mrs. Guadagniati, a formidable person, owned the house on the other side of us. A tall wooden structure with a long staircase, it was above a ground floor apartment which was rented out to newcomers from Italy, usually from Carrara and whose men worked in the Musto Marble works in South San Francisco. With Mrs, Guadagniati were her two adult sons, the Viaggi brothers, her grandson, Mario, and her daughter Edith. (Edith spoke English without an accent, having been brought here as an infant. She worked for an insurance company and became a close friend of my mother’s.) Next door was a childless Greek couple whose neighbors were the Flemings and the Lundborgs; these families didn’t stay long. (Their children were readily accepted as playmates during their period on Le Conte.) The Barnharts—Bob and Ruby, Bob’s mother, Mrs. Barnhart, and their beloved dog moved into one of the houses; they also became good friends.(Old Mrs. Barnhart invited us to call her Grandma. Although I longed to have grandparents like the ones I read about in books, I could not bring myself to address this lady as anything but Mrs. Barnhart. With her snowy white hair pink cheeks and c.alm blue eyes she looked more like the lady on the See’s candy box than anyone from the Armenian-Assyrian community.) 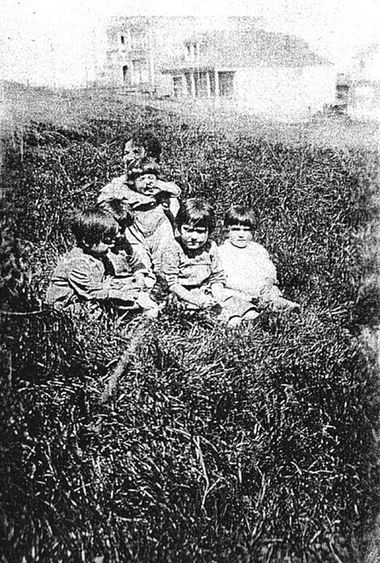 On San Bruno Avenue overlooking our backyard were three houses side by side. Right above lived Aldo Bartolozzi, a playmate. Next door to his house was the Swedish lady who sold her eggs and chickens to neighbors and on the other a house rented by a Mormon family. I babysat their infant from time to time.

Across the street, set against the small hill that rose immediately above San Bruno Avenue was a Russian family; the neighbors were impressed when they added a sauna to the house. Violet, their blonde blue-eyed daughter , was my inspiration for the name given to my youngest sister. Unfortunately, she ran off with a sailor when she was barely l8, creating a minor scandal. 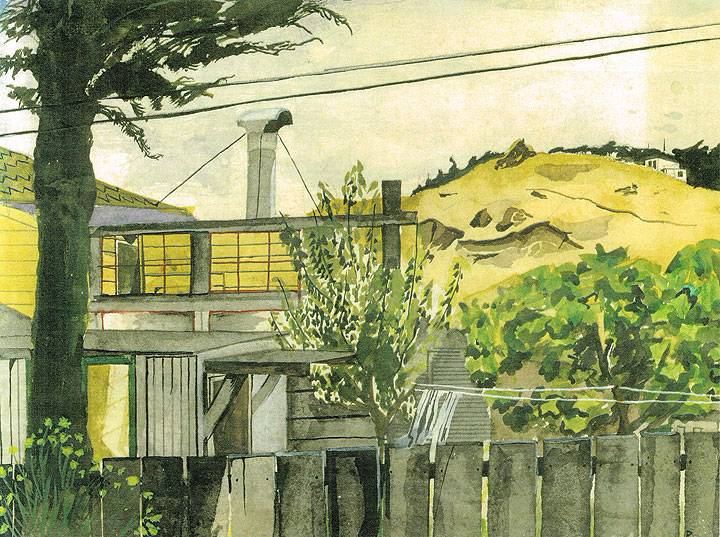 Up on the hill lived the Collopys, an Irish family, whose kids had fiery red hair. Nearby was Mr. Torres who performed handy-man duties as well as hauling whatever needed to be moved in his truck. One visit to our house to repair the Maytag washer remains fixed in my mind forever. Accompanied by one of his boys and finding himself in need of a tool, he ordered, “Tito, ron home and get the geebil.” Years later when I read James Thurber’s short story, “The Black Magic of Barney Hiller” I totally understood his being baffled when his handyman announced that he was “going to hunt grotches in the woods.”

The next street over from Le Conte was Key Avenue and our friends there included Bertha Heitman (for a short period I accompanied her to the Lutheran Church’s Sunday School), the Frieres—Eloise, Lucien and Mex—and Henry Gutierrez. One side of Key was almost entirely occupied by a huge garden owned by a man known only as The Frenchman. As no children issued from there we knew nothing else about him.

It was a peaceful place in which to grow up. As children we were unaware of any problems other families might have unless it was acted out in the open such as the time Edith, who would have liked to be a flapper, came home with her chignon cut off, her hair bobbed. She cowered on the first landing of the steep staircase as her mother and brothers screamed in Italian at her from the front porch for all to hear. (She must have won the battle because she continued to wear her hair short.)Or the time we were awakened in the dark of night by the door bell and frantic knocking . My mother, clad in a long white nightgown, her hair down around the shoulders, opened to admit Greek lady from down the street, also in a long nightgown. She was sobbing, obviously in the throes of a nervous crisis. We were embarrassed because of her addressing my mother as “The Madonna.” An ambulance soon came for her.

People were friendly, of good will but there was no real intimacy. The young mothers bonded because of their common interests in keeping house and raising a family. There seemed to be no any envy; everyone was more or less in the same financial level and they all shared the same goals: to make a good life for their children.