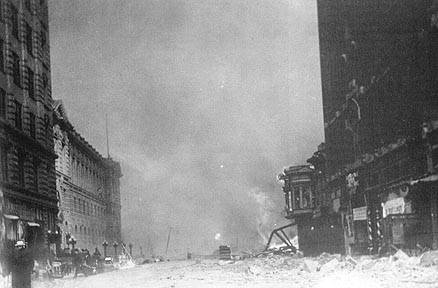 The earthquake of April 18, 1906, needs no description here. Eleven major fires started immediately in the South-of-Market district. With its old wooden buildings and broken water mains, most of the district was consumed in the first six hours after the quake. Elsewhere the fires raged for three more days. Residents who survived salvaged what they could carry, pull, or push, and fled before the fire. When housing was rebuilt, only single men lived near 3rd and Mission.50

Immediately after the fire, most of the city was a giant field of rubble, with some brick chimneys and fragments of brick walls left standing. South of Market, two buildings had been saved by their dedicated employees: the 1870 U.S. Mint on Fifth Street and the new U.S. Post Office on Seventh Street. Burned-out shells remained in the historical society's area: St. Patrick's Church, the Aronson Building at the northwest corner of Third and Mission, the Palace Hotel, and the Rialto Building at the southwest corner of New Montgomery and Mission. These shells were eventually restored, except the Palace. The hotel had been built so strongly, and with such thick walls of brick, that it took 156 days to demolish the remains.(51)

While the reconstruction of lives, businesses, and buildings was everyone's first priority, some parts of the city were rebuilt more quickly than others. A map of new construction published one year after the fire shows the Italian quarter of North Beach solidly rebuilt. There were also concentrations along the fire's western boundary at Van Ness Avenue, near the Southern Pacific railhead, along the working waterfront, and in the financial district. A booster's product, the map recorded temporary buildings as well as burned-out ones slated to be restored.(52) 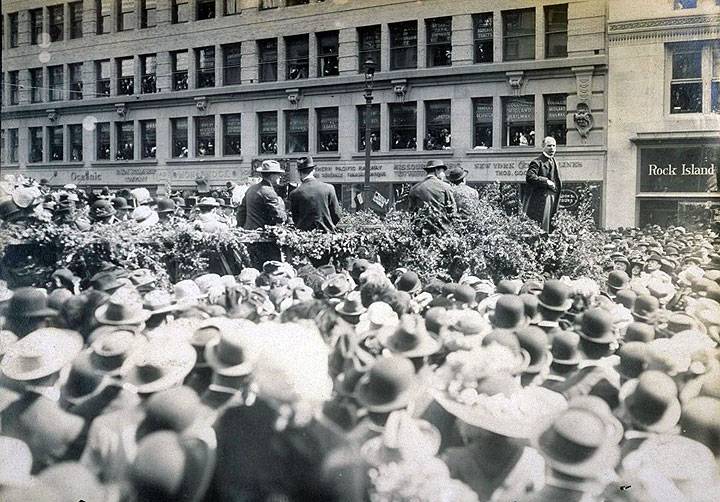 Famous opera singer Luisa Tetrazinni gave a a free concert on Christmas Eve Day, 1910, at Lotta's Fountain on Market Street at Kearny. Locked in a contract dispute and threatened with an injunction against singing in any theater, she sang for free on the street to a crowd of two to three hundred thousand. A local chef named a dish (turkey, chicken, or seafood Tetrazzini) after her.

In the South-of-Market district, the 1907 map showed more gaps than buildings. The two entire square blocks of and facing the California Historical Society site [3rd and Mission] were more than three-fourths empty. The map indicates two small residential hotels on Third Street and one small temporary building on Minna. Immediately west of the historical society site, a four-story brick building for office furniture sales was under construction, but the Rialto Building's shell had not yet been touched. On Third Street, workmen were constructing a new interior for the Aronson Building, and small buildings south of Natoma.(53)

The years 1906 through 1908 saw forty-one buildings go up along Mission, Third, and Jessie streets, filling two-thirds of the parcels from New Montgomery Street to St. Patrick's Church. Half of these structures were one to three stories. The use patterns begun before the fire now intensified. Housing was constructed only in the form of residential hotels. Tall office buildings gravitated to Third Street and to New Montgomery, especially at major intersections. Ground floors were entirely commercial. Wholesale or office furniture stores concentrated along Mission Street. Third Street tenants included bars, restaurants, pawn shops, small clothing stores, Turkish baths, and a movie house. The Builders' Exchange leased a space behind the California Historical Society site, and other construction businesses located nearby.(54)

By 1915, eight- to ten-story office buildings formed bookends for rows of lower buildings, but the new historical society site still stood vacant. This portion of Mission Street had many office furniture and related stores, and Third Street was almost solid with residential hotels above shops. The inner streets of Jessie and Minna butted up against the rears of buildings on the major streets, and were the main addresses for more hotels, some power stations, and a U.S. Marine Corps Building. A few scattered lowrise buildings housed machine shops and the like. The new Palace Hotel had been completed, but its service ramp at Jessie and Annie behind the California Historical Society may be from the original hotel. St. Patrick's was reconstructed about 1910. The Grand Opera House site was occupied by a five-story factory and store for wood and willow wares. Office towers included the Rialto Building at New Montgomery and Mission and the Gunst, Wilson, and Aronson buildings at Mission and Third.

Of all these structures, those east of Annie Street and the Aronson and Williams office skyscrapers survive to this day, but the Gunst Building at the southwest corner of Mission and Third streets has given way to a fraction of the Center for the Arts Galleries. The only other survivors are St. Patrick's Church, the Jessie Street Substation, the slightly later California Historical Society headquarters building, and two buildings behind it on Jessie Street.(55)

Ownership of this area was stable during the years of post-fire reconstruction. Realty companies, trusts, and investment companies held a large share of the land. Individual landholders included Comstock silver heir James Leary Flood, Harbor Commissioner Thomas S. Williams, and Frederick Kohl, better known for the office building at Montgomery and California streets and for a mansion in the town of Burlingame. A number of women also owned property here: Theodosia Grace, Margaret Skelly, Malvena Callatin, Rebecca Deane, and others. Only three companies owned their own buildings: PG&E had the substation, the proprietor of the California Democrat owned its Printing plant, and the Thomas Day Company owned its lighting fixture factory.(56)

Some ownership took the form of estates left by substantial property owners and maintained as independent companies, often incorporated. Parcels near the California Historical Society belonged to the estate companies of Robert Thompson, Patrick Burns, Charles Meyer, and John H. Baird. Five large parcels belonged to the Sharon Estate Company, formed after William Sharon's death in 1885. Sharon and his partner, William C. Ralston, had bought Harpending's share of the New Montgomery Real Estate Company and had built the Palace Hotel. Hours before his death, the financially pressed Ralston had been forced to entrust all his property to Sharon. Thus the post-1906 Sharon Estate parcels dated back to the creation of New Montgomery Street in the 1860s.(57)