"Nature" and "Culture" at the Presidio

by Pete Holloran, excerpted from "Seeing the Trees Through the Forest: Oaks and History in the Presidio" in Reclaiming San Francisco (San Francisco: City Lights Books, 1998) 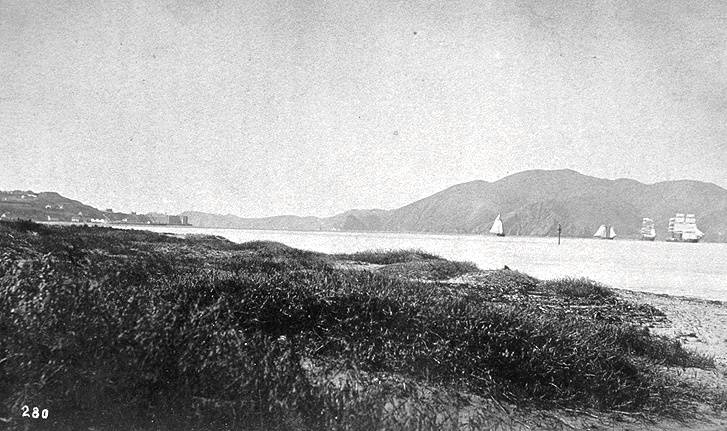 By the time the U.S. Army took over the Presidio in 1846, the landscape had been so altered that few trees remained. With the ability to resprout vigorously, oaks had survived periodic fires and occasional wood harvesting by California Indians, but the garrisons growing needs eventually depleted the woodlands. In providing fuel for the use of troops, one resident wrote in 1859, the thickets of scrub oaks in the [Presidio] Reserve [have] been destroyed. He added that there is scarcely a tree left for ornament or use. The troops had to switch to coal for cooking and heating. (Thompson n.d.).

An oak branch carved into the shape of a bowl is a cultural resource; the tree it came from and all its progeny are natural resources. To some cultural resource advocates, the importance of these oaks to indigenous people becomes significant only when artifacts are involved. Others feel that coast live oaks should be honored in all their complexity and not just when they become utensils.

To many, the Presidio's oak groves are cause for hope, but as Francis Bacon reminded us, hope is a good breakfast but a poor supper. Waiting for hopes harvest is a good way to go hungry. The oak grove evokes decades of failed harvests, a visible reminder of what has been lost, of tragedies whose scars are still visible on the land. To this urban dweller teetering here at the end of the twentieth century and its ecological catastrophes, coast live oaks are powerful indigenous symbols of hope and history of culture and nature. But their native land is divided.

As natural resources in a national park, mature oaks are protected; their future is more or less secure. But what of the acorns that find themselves just beyond an area designated as natural? Will they find a place to put down roots and raise a family of hummingbirds? Within the confines of this national park, not all oak seedlings are welcome.

The Presidio faces many pressures as part of the most visited national park in the country, including congressional demands that it become self-sufficient within fifteen years or be sold. (Holloran 1996) The fate of its buildings are hotly contested. From an oaks point of view, though, the most important debate is over the future of the 780 acres of open space.

Of these 780 acres, the park has designated only 145 acres as protected natural areas; an additional 100 acres may be available for eventual restoration. The rest are cultural landscapes. These landscapes include parade grounds, ballfields, an airfield, a golf course, and more than 300 acres of trees planted by the Army. Because of their age, most of these features are considered protected cultural resources.

But what happens when there is a conflict between the conservation of natural and cultural resources? As defined by the National Park Service, cultural landscapes are nearly always the victor. The hegemony of cultural landscapes begins with their very definition: any evidence of the interaction of people and place over time can become part of the cultural landscape. Its components can include topography, vegetation, structures, circulation networks, land-use patterns, building clusters, and small-scale features such as signs and flagpoles. (Golden Gate National Recreation Area 1994) So defined, natural processes become just another layer on a landscape defined by its human characteristics; nature is subsumed by culture.

As we imagine the future of the Presidio landscape, are we compelled to repeat the errors of the Army and other residents simply because those errors were committed in the historic past, i.e., more than fifty years ago? If the Army filled a tidal marsh wetland to build an airfield, should we restore the historic wetland or rebuild the historic airfield? If the Army dumped toxic material into a landfill, should it be removed or left in the environment as evidence of the Army's construction practices? If the Army planted thousands of trees among the dunes and grasslands, should we restore the indigenous native plant communities or the historic plantings, when the trees begin to die?

The park finds itself in such odd situations because of its attempt to impose fixed temporal boundaries on landscapes, which by their very nature change over time. It is impossible to arrest the evolution of a landscape. It is also impossible to restore landscape features to a particular moment in time; the replica will always be different, a creature of its creators and a captive of its past. As one historian said of a mountain range in Oregon, No one can restore the Blues back to their original state; however, we can restore the Blues back to an inevitably altered, but not inevitably impoverished, biota by giving up our ideals of maximum efficiency and commodity production, and substituting other ideals which allow for complexity, diversity, and uncertainty. (Langston 1995)

The historic ideals that transformed the Presidio landscape also need to be updated, just as other military values have been modified (ending racial segregation and the all-male military are two obvious examples of changing military values) The complex Presidio landscapes will be revealed best by an approach that values diversity over narrow interpretations of history. By treating the Presidio primarily as a cultural landscape, we privilege the victor's version of history: a civilizing force tamed the wild landscape. This interpretative framework is no longer in favor in most disciplines, but its legacy remains apparent in park publications about the Presidio's natural landscape.

Consider a different narrative of the Presidio's history. A few remnant natural areas, including several oak groves, withstood the massive disturbance of more than two centuries of continuous military occupation. Native plant communities survived twenty decades of live-ammunition drills, grazing, and firewood cutting, but not without some losses. At least eighty-four native plant species, for example, have been eliminated from the Presidio, nearly a quarter of its original species diversity. Some conservation biologists predict further losses since only a tenth of the Presidio's area is set aside as protected natural areas. According to a famous model of biogeography, a ninety-percent reduction in area leads to a fifty-percent decline in species diversity. If this model holds true for the Presidio, an additional eighty locally uncommon species (an additional quarter) may be lost in the future if its natural areas are not reconnected and expanded. (Vasey 1997)

Most readers are familiar with these two types of stories about the transformation of natural landscapes by their human inhabitants. In the archetypal version of these narratives of decline, the fall from original grace was precipitated by the bite of an apple, not the felling of an oak. But by focusing on discontinuities -- the disappearance of pristine Nature and its transformation into an ordered human landscape -- we misunderstand the dynamic nature of human history and biological systems. (Cronon 1995) Different cultures have occupied this corner of the San Francisco peninsula, and created a succession of landscapes, each dependent on the previous for its fundamental components. (Flores 1994) Where is nature then? It is all around; the landscapes are saturated with it. The boundaries between nature and culture are as gray as summer fog.

--Cronon, William. 1995. The trouble with wilderness; or, getting back to the wrong nature in Uncommon Ground: Toward Reinventing Nature (W. Cronon, ed.) W. W. Norton, New York.

--Holloran, Peter. 1996. The greening of the Golden Gate: Community-based restoration at the Presidio of San Francisco Restoration & Management Notes 14: 112123.