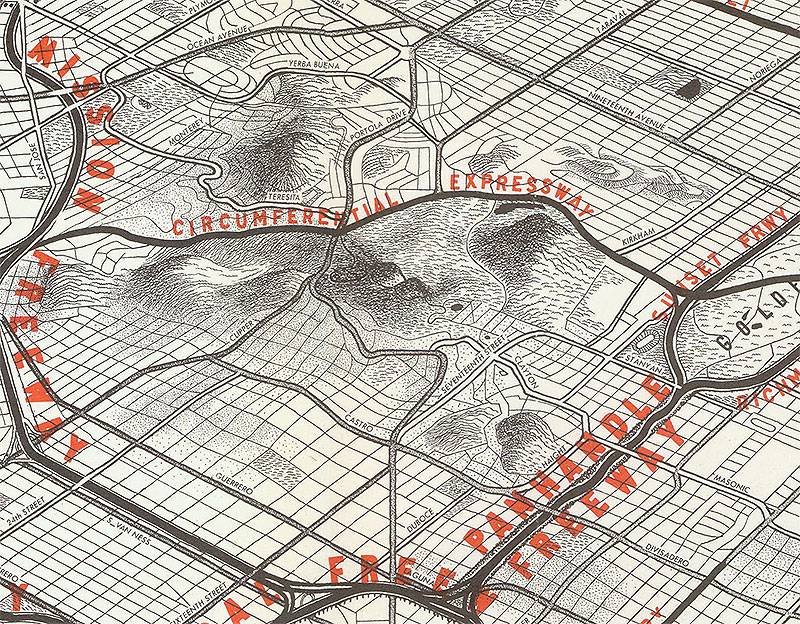 Glen Park has lost one of its all-time champions: Zoanne Nordstrom, who lived on Surrey Street for more than 60 years and helped save Glen Canyon from decimation by the freeway lobby, died Feb. 15, at age 87, of the Covid-19 virus.

For decades, anyone out and about in the neighborhood would run into Nordstrom, whether in earlier days when she was walking her beloved dog Max, or schmoozing with her daily coffee klatch at her favorite meeting place, Higher Grounds Café on Chenery Street. When owner Manhal Jweinat would greet her and ask how she was, she’d invariably answer, “I’m great—now that I’m here!”

She was born in Hollywood and raised by a single mother. She worked from the age of 13 to help support the family. While attending UC Berkeley, where she got her BA in English, she managed an apartment building to pay her tuition and expenses. She got her master’s degree in psychology from SF State, while working multiple jobs.

Nordstrom was married for about 20 years to Reginald Theriault. (When they divorced, she went back to her maiden name.) She is survived by their sons, Raymond and Marcus (a third son, Thomas, predeceased her); her brother, Alan, and three grandchildren. Her husband was a longshoreman and later a union organizer. When their children were small, Nordstrom took them to the fields to pick fruit along with the migrant workers.

Nordstrom’s activism in Glen Park and San Francisco was legendary and boundless. But if there’s one thing she is famous (or infamous) for, it was for her role in the so-called Freeway Revolt. One day she and her friend Joan Seiwald spotted a surveyor putting stakes in the ground on Bosworth Street. When he told them it was for an elevated freeway that was to run crosstown, above Glen Canyon Park, Nordstrom told him, “Like hell you’ll build a freeway!” 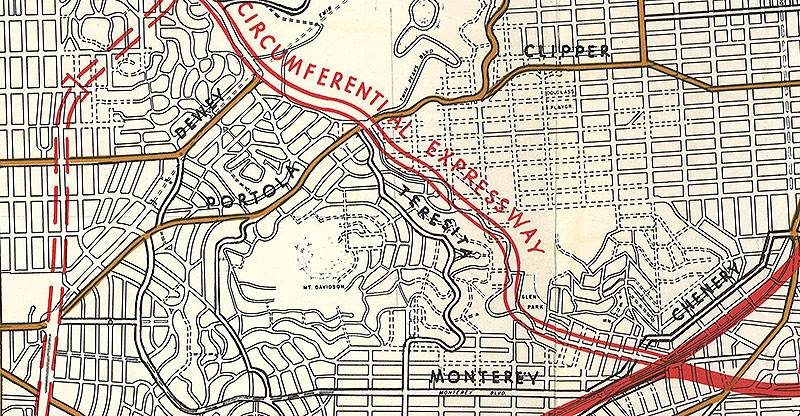 A different rendition of the same crackpot plan to put a freeway through Glen Park, c. 1948.

This cause celebre became known as the Freeway Revolt, and lasted from 1965 to 1970. Nordstrom, along with Seiwald and Geri Arkush, campaigned relentlessly and successfully to kill the project, and earned the nickname “the Gum Tree Girls,” after the blue gum eucalyptus trees in the park that would be mowed down by the planned freeway.

“It wasn’t a compliment,” Seiwald noted drolly. “The City Hall men hated us. We were beating them, one of the world’s greatest sins.”

Seiwald, who has lived on Burnside Avenue for about 60 years, is now the last surviving member of the Gum Tree Girls trio. Arkush died in 1999. Nordstrom and Seiwald were personal friends from the time their kids were small. Seiwald had five kids to Nordstrom’s three, each with a boy the same age. “We hit it off,” Seiwald said. “We were both teachers—I was a school librarian and taught English to Spanish- speaking students and social studies.”

With all they had in common, they differed in politics, of all things. Nordstrom was a flaming liberal; Seiwald is very conservative. “So we never brought it up, never discussed it. It was never a problem.”

Another issue that set Nordstrom off, in 1996-97, was a plan to pave the gravel Alms Road in Glen Canyon Park so cars could more easily drive in to drop their kids off at the Glenridge nursery school and Silver Tree day camp, deep within the park. Nordstrom thought this idea was absurd and unsafe, and that part of the kids’ exercise, fresh air and recreation were about walking there and back. “It ain’t gonna happen,” Nordstrom swore to Park and Rec.

She counted the cars dropping off kids, took down the license plates, and determined that 95 percent of them came from outside the city. She also noted that cars would drive along the path at 25 to 30 mph. She told Mayor Willie Brown there needed to be a City policy that the majority of children in the programs should be from San Francisco, and public transportation to get there was necessary in the summers. Nordstrom didn't focus only on big community issues. She took others under her wing in a very personal way, as when she rented out a space in her home to a new arrival in San Francisco, Jeff DeMark, in the late 1980s. 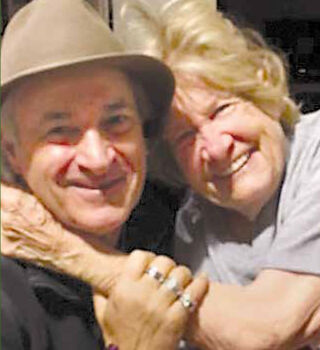 Zoanne Nordstrom and Jeff DeMark in 2016.

In an essay he wrote after she died, DeMark—originally from Madison, Wis., now an actor and writer in Blue Lake, northeast of Eureka—recalled, “I lived at her house for three years and she changed my life with her way of dealing with the world, her attitude about money, philanthropy, her optimism, her fighting spirit, her down-home practicality. I left in 1990 but she would let me and my family stay there almost any time and we went to many ball games together. She said I had ‘Former renter’s squatter’s rights for life.’”

He credited Nordstrom with “showing me how to live, look at money as a means to an end, something that’s in flow rather than to be afraid of, approaching life as an adventure and how to be fearless. How to believe in myself above all.”

Once, she asked him, “You’re not really worried about money, are you?”

“But you’ll always be OK. Money will come to you. I’ll lend you whatever you want.”

In the end, DeMark never borrowed money from her, “but the way she approached life, how she staked each of her sons to a house or land, how she supported so many organizations … it just amazed me you could live like that and thrive. Her humor, her fierceness and compassion were defining characteristics. I credit Zoe with so much of the good that’s happened since I moved west. She’s the ultimate example of ‘Pay it forward.’”

Nordstrom was president of the Glen Park Association from 1998 through 2002. Michael Rice, another neighborhood stalwart, followed Nordstrom in that office in 2004, after two years as vice president. He remembers her as a mentor as well as a friend.

Rice first attended a GPA meeting when he wanted to speak in favor of a project that the association was considering opposing. “I called Zoanne and asked if I could speak on this agenda item. Zoanne said, ‘Of course. We always want to hear all sides of these issues.’ After a bit more conversation, Zoanne said, ‘Michael, I can see you are really interested in Glen Park. Would you like to be an officer? The vice president position is vacant.’”

“Without thinking too much, I said yes. That started a great experience, watching Zoanne run GPA meetings, firmly take on controversy, be clear on goals for the neighborhood, and over time, say, ‘Michael, I’ve been president for a long time. When are you stepping up?’

“After I became president, Zoanne was always ready to give advice, share her knowledge of City workings and opinions on Glen Park issues, and, also, tell me if I was going down a tricky path.” 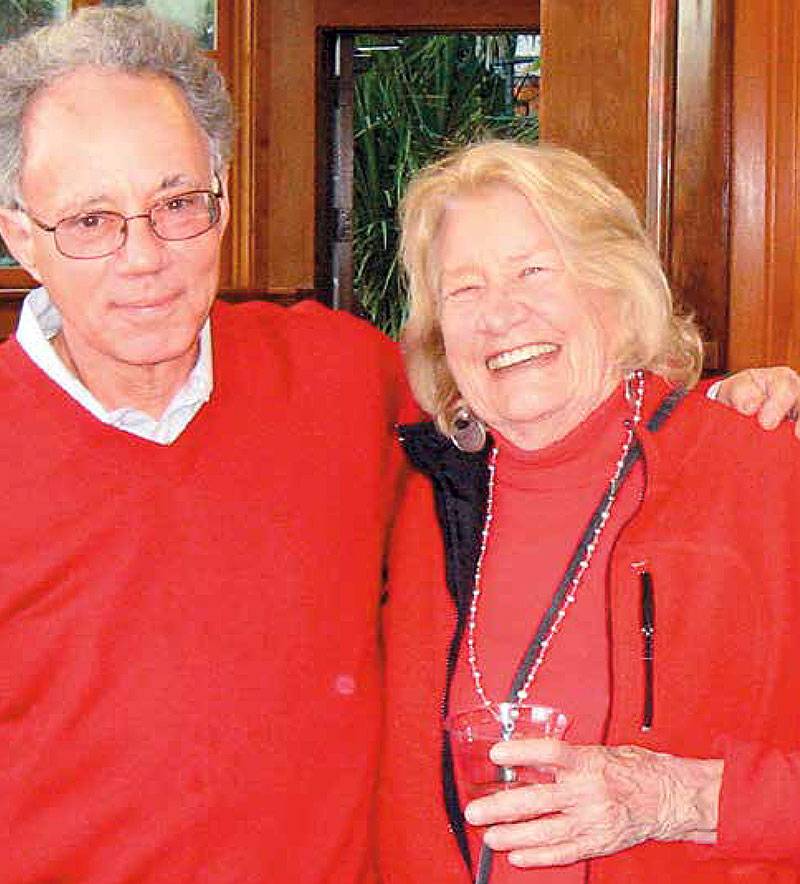 Michael Rice with Zoanne Nordstrom at the Glen Park Association's holiday party at the Sunnyside Conservatory in 2013.

In later years, Rice recalled, “I would mostly see Zoanne as she walked back from morning coffee at Higher Grounds. She’d say I was doing a great job, and I would say she had showed me the way. Zoanne showed all us the way to be a neighbor.”

Nordstrom was a strong supporter of the library, market and housing complex that was built at the intersection of Diamond and Wilder streets in 2006. She knew that San Francisco had a housing shortage, and she focused on supporting inclusion of residential units in the project, especially since it was near BART. She wanted to keep big-box stores out of the neighborhood.

More recently she advocated for the Glen Park Rec Center renovation of 2016.

Unsurprisingly, Nordstrom was a lifelong advocate for women’s rights and recognition, starting when she managed an apartment building in Berkeley in her youth. She took a stand in all the city elections, and felt strongly that more women needed to be in elected office.

At City College, she met her best friend of more than 40 years, Margaret (Peggy) Guichard, who was chair of the Health Care Technology department. Guichard lives in Saratoga.

Nordstrom was also dear friends with Roger Sanders, director of the Mayor’s Office of Community Development during Willie Brown’s administration, and Nordstrom served on its Citizens Committee. They were also together on the board of San Francisco Tomorrow, an environmental advocacy group.

In interviews with the Glen Park News, both Guichard and Sanders brimmed with recollections about Nordstrom and her sterling qualities. “Zoanne had an opinion about most things, and she was terrific. And she was right 99 percent of the time,” Guichard observed. “She never did these things for selfish reasons. She always did them with the thought of the community, the health of the children. She was really motivated by those factors.”

They note that her feisty determination was always backed up by research and due diligence. She cared deeply about Glen Park because that’s where she and her neighbors were raising their kids.

Nordstrom, Guichard, Sanders and his partner have been family to each other. “We traveled together, enjoyed holidays together, haunted the flea markets, and went gambling in Las Vegas all night on New Year’s Eve,” Sanders said. She loved the terrifying rides at Great America, he recalled: “Let’s do it again!” she’d say after the first ride was over.

Nordstrom was a Giants season ticketholder. She, Sanders and his partner went to baseball games together. After a few drinks at the Glen Park Station bar, they’d be in a great mood and hop on BART to the ballpark. They’d eat hot dogs and often they’d have another drink at the Station on the way home, Guichard recalled.

Guichard and Nordstrom traveled together a lot, to Europe and Disneyland, among other places. Nordstrom was of Norwegian heritage. Her favorite destination was Tromso, a town in Norway above the Arctic Circle, where she had family.

Her home on Surrey Street was filled with eclectic art, ranging from vintage prints of women’s fashion to works of original art.

Of the many facets of Nordstrom’s life, the two things she loved most were in Glen Park—Higher Grounds Café, where she enjoyed daily lattes and talk of “politics, politics and politics”— and Glen Canyon Park, especially as she got older. She was so happy that it existed, that the City invested in it, and that people were using it, including those from other neighborhoods.

There’s a Glen Park history sign along Alms Road that commemorates the Gum Tree Girls era. Sanders recounted that, on their last walk through the canyon, a woman looked at Nordstrom and asked, “Is this your first time here?”—right beside the plaque that has the Gum Tree Girls' history on it. Sanders told her Nordstrom’s picture was right there. The woman couldn’t get over that, and she just wanted to talk with Nordstrom. It made Nordstrom’s day.

Nordstrom’s health declined in recent years and, when the pandemic hit, she rarely went out. Her friends shopped for her and brought food in.

When asked how he will remember Nordstrom, Sanders says, “I will miss her for the rest of my life. I will think about her every day. She was so close. And believe me, Zoanne and I had many fights. We had many arguments, but you want to know something? It didn’t make a difference.”

Of their long friendship, Guichard said, “Zoanne is the best friend I’ve had for over 40 years, and for all women, an absolute role model. In all that time the only disagreement we had was: I was a fan of term limits and she wasn’t. She was a smart, smart, savvy woman.” 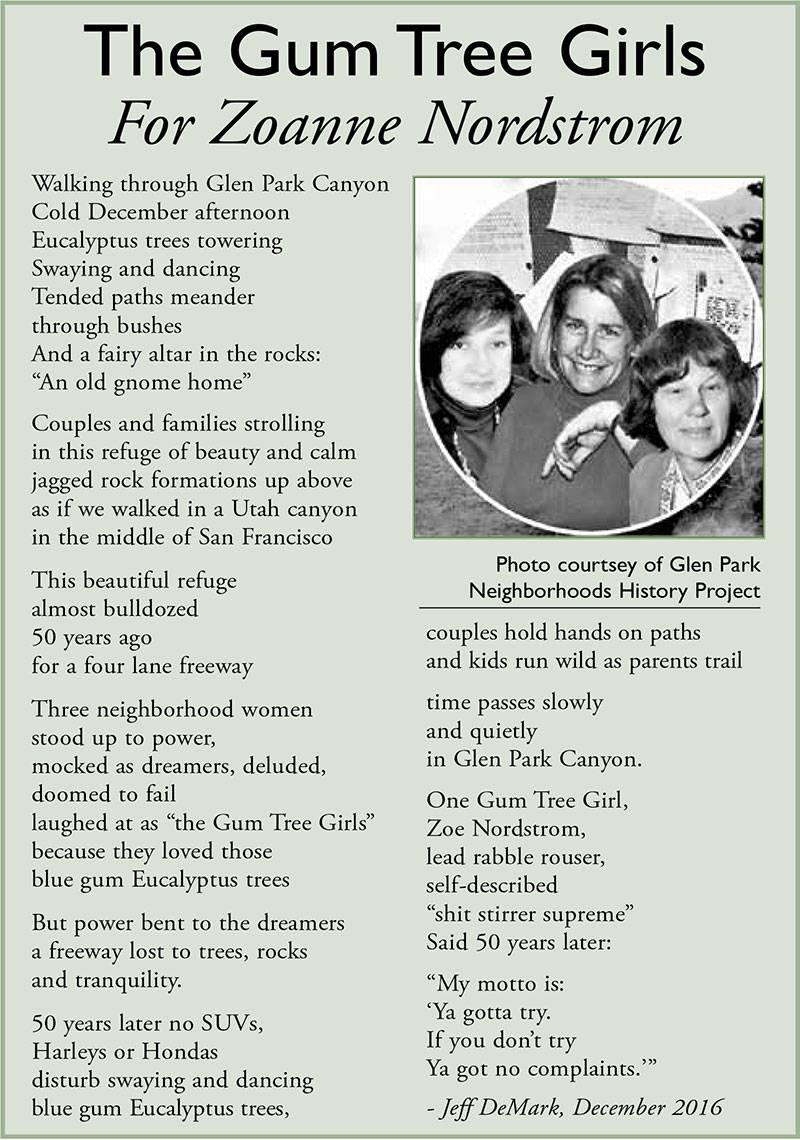