World War II: Self-Discovery for Many 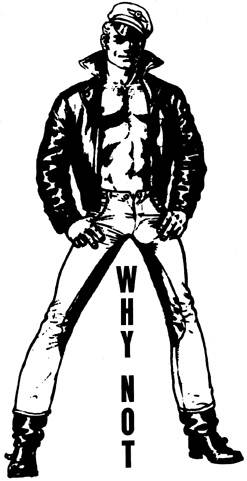 World War II plucked young people out of small towns across America and brought them together in sex-segregated settings on a massive scale. Many had their first homosexual encounters and formed their earliest queer alliances as a direct result of their participation in the service or the wartime labor market.

Allan Sherman (a heterosexual) described this culture shock dramatically in his 1973 book, The Rape of the A*P*E*, "There were 13 million of us drafted to fight for God and country, and every one a full-fledged, clean-cut, wholesome, decent, interchangeable American boy. We all kissed Mom and Dad good-bye at the railroad station." Then they were shipped out and whipped into shape by foul-mouthed, intimidating superiors. Soon the realization hit: "It was almost too good to be true. Everything in the army was obscene or pornographic."

With fifty men sharing a latrine, toilet taboos vanished "in a symphony of grunts and smells and flushing noises." Privacy was nonexistent. "Answering nature's call meant subjecting yourself to loud and detailed criticism - perceptive and merciless descriptions of your sex organs, ranging from ridicule to glowing admiration." This became a game for many men, and a challenge for others. Soldiers soon learned to flaunt their genitals and brag about their toilet mannerisms. "Anyone who was modest about these was immediately and forever labeled a homosexual. (In those days, that was an insult.)" Suddenly, a generation of servicemen raised under the oppressively genteel mantle of American Victorianism were forced into an awareness of one another's most intimate body parts and bodily functions.

San Francisco was the point of departure and reentry for many men involved in the war. Those searching for the growing number of gay bars and restaurants in this port town got an unknowing assist from the armed services themselves, who routinely posted lists of off-limits bars.

Rather than returning home, many soldiers (and particularly those dishonorably discharged for homosexuality) stayed or settled in San Francisco after their service ended.