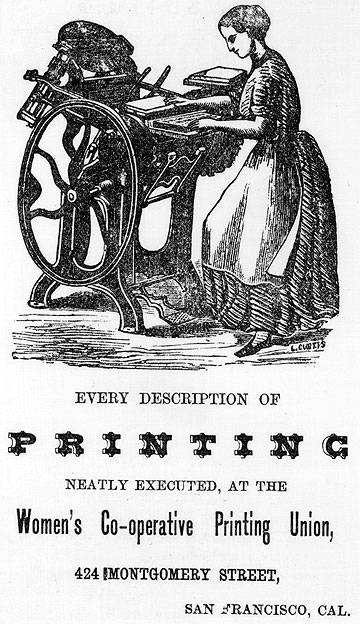 Mrs. Agnes B Peterson was one such woman who arrived in 1868. Upon being rebuffed by the Union, she raised the capital to open her own printing office and establish the Women’s Co-operative Printing Union (WCPU), the first permanent foothold for woman printers in San Francisco. The times had already started changing with women becoming a significant part of San Francisco life. Other organizations helping women had been established that same year: the confusingly similar sounding Women’s Co-operative Union to provide employment for women in various fields, and the California Labor Exchange to help both men and women find work.

Other businesses came and went, but the WCPU became ever stronger, successfully producing large quantities of ephemera, billheads, legal briefs and books over the next 18 years. The success was due at first to the leadership of Mrs. Emily A. Pitts, editor of the Sunday Evening Mercury (later, The Pioneer). Emily Pitts lived at 420 Montgomery Street, where she published her newspaper and guided the WCPU. The Sunday Evening Mercury had started out as a “journal of Romance and Literature,” but upon purchasing it in 1869, Emily Pitts soon changed its name and turned it into a journal for woman suffrage, the first one in the West. Putting ever more of her energies into the suffrage cause and The Pioneer, she turned leadership of the WCPU over to Lizzie G. Richmond, who arrived in San Francisco from Rhode Island in 1869. Lizzie Richmond built a thriving organization and is responsible for its great success.

Find out where many of these women did their printing in downtown San Francisco.