Difference between revisions of "Who knew California had a State Police?" 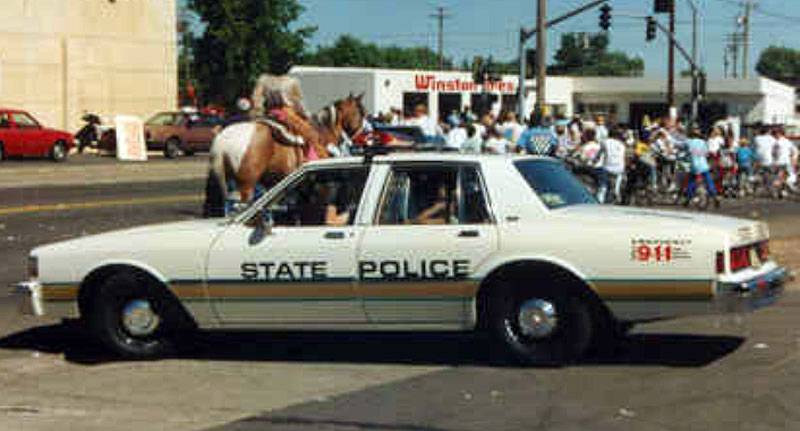 Why There Were State Police in San Francisco

In California, those who have powers of arrest beyond those of private citizens are known as peace officers. In San Francisco, over the years there have been scores of job titles at the city, county, state and federal levels that have had peace officer powers. Some are well known, such as the San Francisco Police Department (SFPD), the San Francisco County Sheriff's Office (SFSO), the California Highway Patrol (CHP) and the Federal Bureau of Investigation (FBI). Some are or were almost unknown to those not having direct contact with them.

One such agency was the California State Police (CSP). Well known at the State Capitol in Sacramento, its officers were usually mistaken for the CHP in other cities, including San Francisco. Headquartered at the Earl Warren State Building (bounded by McAllister St., Polk St., Hyde St. and Golden Gate Ave.), the CSP was tasked with the provision of police services on state property.

Dating back to the first two officers tasked by the legislature with protecting the State Capitol in 1887, the mission of the CSP grew over the years to providing police services to state properties throughout California that did not have their own enforcement branch. State colleges and universities, for example, have their own police departments. The Department of Motor Vehicles (DMV), the Employment Development Department (EDD) and most other state agencies relied on the CSP to provide protection, investigate crimes and make arrests on their property.

In San Francisco, state property included the large Earl Warren State Building in Civic Center, the various properties owned by the California Department of Transportation (CalTrans) and literally dozens of agencies spread throughout The City. One of the more ironic duties was the almost-yearly report an officer would have to take after a driver at the DMV, there to take his or her driving test, ran their car into or even through the wall of the building. 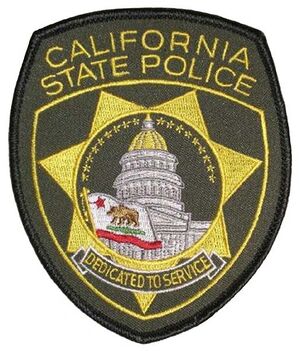 The State Police uniforms prior to the 1970s featured tan shirts and green pants. In the previous era, the officers in San Francisco and other cities reported to the local Regional Building Manager. The reorganization around the 1970s created a separate organization, still in the Department of General Services, but with a headquarters and a chief in Sacramento. The uniform changed at that time to tan pants with a green and gold stripe down the leg. It looked fairly close to the CHP uniform, which sometimes led to the public's confusion.

A decade-and-a-half or so after the tan uniform, with its newly-designed patch, was adopted, a green shirt was adopted as an optional uniform item. Another huge change was the adoption of the optional brown Montanna Peak or "Smokey the Bear" hat, also known as a "campaign hat." The CHP later adopted a gray-blue version of the hat.

At the time of the reorganization, the old title of State Policeman was changed to State Police Officer. This was in anticipation of a new change that was sweeping state service: the hiring of female officers. The CSP's San Francisco Field Office hired two of the first female officers in that agency.

One of the places where the most Bay Area residents saw the CSP was at the Transbay Transit Terminal, also known as the East Bay Terminal and the TTT. The facility was owned by CalTrans, and the CSP was thus contacted by Caltrans to provide police services at that sprawling, three-story bus terminal at 425 Mission Street (where the new Salesforce Transit Center is now located). Tens of thousands of commuters passed through the TTT every weekday, with AC Transit being the main transportation provider. Continental Trailways and a bus service to the Oakland Amtrak Station were also located there.

With that many people passing through, the CSP encountered everything from drunk-and-disorderly complaints to murder. In the 1970s a pipe bomb went off on the first floor, which was investigated by state, city and federal law enforcement agencies.

In 1974, the AC Transit Strike, which lasted over sixty days, resulted in picketing, which was monitored and regulated by the CSP. Ironically, the only really violent confrontation between the pickets and the CSP, which made the local press, happened the day before the contract was signed.

Another major protest that made the news was during the first days of Desert Storm when the SFPD provided assistance to the CSP to clear protestors who were blocking access for buses from the SF/Oakland Bay Bridge to the TTT.

The TTT had the only substation of the SF Field Office, complete with a locker room and a holding cell. The cell was for temporary incarceration only, as arrested people had to be booked at the SFSO's facility at the SF Hall of Justice on Bryant St, where SFPD also booked their suspects.

The building that housed the CSP's San Francisco Field Office was at 350 McAllister St. Before the Loma Prieta Earthquake, that state building complex housed the California Supreme Court among many other state agencies. Many Californians do not know that the Court is headquartered in San Francisco, not Sacramento. While the Supreme Court maintained its own small group of bailiffs, the CSP was asked to provide the uniformed presence for the court's "en banc" hearings, which were generally open to the public. 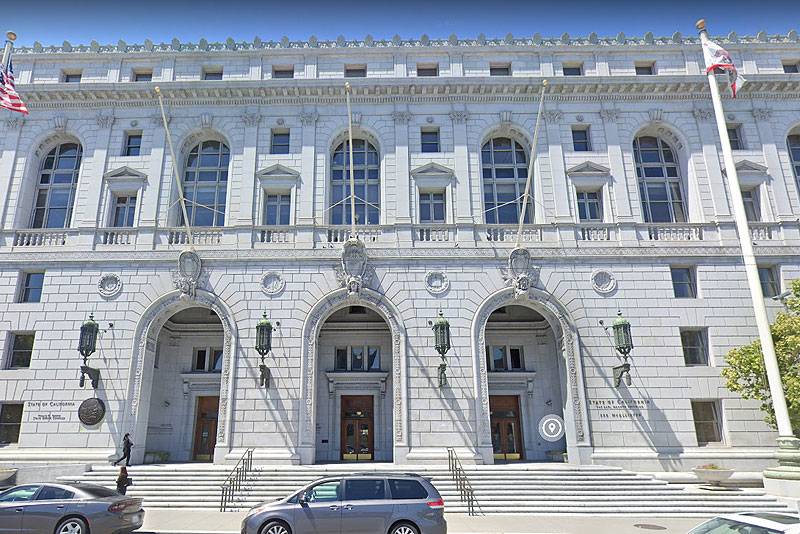 Also in the realm of dignitary protection, the CSP had a dedicated unit at the State Capitol for the protection of the Governor and other state officials. It operated much like the Secret Service, and was actually trained by the latter agency. In San Francisco, the Governor had a satellite office, and the SF Field Office often responded to handle protests, coordinate visits from the Governor as additional resources for the Protective Services Detail and investigate potential threats. During periods of uncertainty, the local CSP office provided transportation for state officials and personal protection at their residences.

The SF Field Office had a dispatch center in the lobby of 350 McAllister St. for many years. There was an officer who sat there and answered questions from the public between police calls. It was remodeled into a closed office by the 1980s, and professional dispatchers were hired to staff the Bay-Area-wide dispatch area's communication center.

Demonstrations, from protests over the Public Utility Commission's closed hearings to demonstrations against one governor or another, were monthly occurrences at the State's Civic Center properties. One of the most noted was the evening of the day Governor Deukmejian vetoed the Gay Rights Bill. Thousands of protesters gathered in Civic Center and other parts of the city, and a large group tried to break into the entrance to the State Building at 455 Golden Gate Avenue. 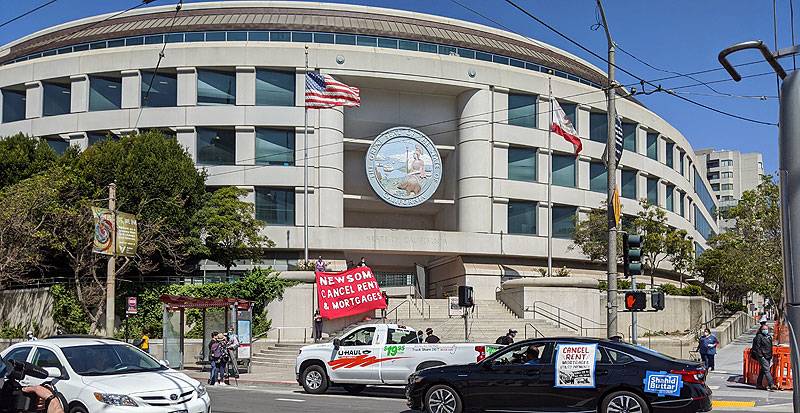 The new State of California building at McAllister and Van Ness continues to attract protests, as this May 1, 2020 Cancel Rent demonstration shows.

Consulate of the Soviet Union Detail

For years, the US Department of State's Diplomatic Security Service contracted with the State Police to provide 24/7/365 protection for the Soviet Consulate at 2790 Green St in Pacific Heights. A marked State Police cruiser was parked outside for many years until the fall of the Soviet Union, when the detail ended.

After the Loma Prieta Earthquake, the San Francisco Field Office had to relocate out of the damaged Civic Center Complex, and was housed in a rented facility just south of Market Street. It still provided patrols of state property in San Francisco and details at locations such as the EDD's Unemployment Insurance Office.

The End of an Era

There were long-term plans to put the SF Field Office back in the Civic Center Complex upon its renovation, but the plans were abandoned when it was decided to merge the CSP into the much larger (by a factor of almost twenty at the end) California Highway Patrol. Many personnel left the CSP prior to the final merger ceremony on July 12, 1995. The former State Police Officers who wished to do so took a course at the CHP Academy and became members of the larger organization as the newly-minted "CHP Officer" series. The CHP had formerly been known as "Traffic Officers."

It is ironic that when the Earl Warren Building was renovated as part of the Civic Center State Building reconstruction in the late 1990s, the CHP was contracted to provide a law enforcement officer at the building in addition to the privately-contracted security service there. The building manager when the new million-square-foot complex opened was former CSP Captain Glenn Della-Monica. The CHP officers assigned to the building were mostly former CSP officers who had previously worked under Capt. Della-Monica pre-merger, and they greeted him as "Captain." This confused many building tenants who did not know his past.

It did, however, bring the history of the State Police in the San Francisco State Building full circle. In the days when the State Police officers were under the command of the local building manager, the manager at the time, Mr. Helliskoff, had the officers come to attention when he passed and address him as "Captain."