What Saved These Mission Victorians?

Early on Friday, May 14, 1976, a large bomb exploded at the Bayview Federal Savings Corporation branch in Larkspur, north of San Francisco, extensively damaging the bank and six adjacent buildings. Minutes after the bombing a male caller told Marin County police that the New World Liberation Front (NWLF) was responsible for the attack. The NWLF later circulated a communiqué demanding renovation of Bay View’s “slum” structures in San Francisco. 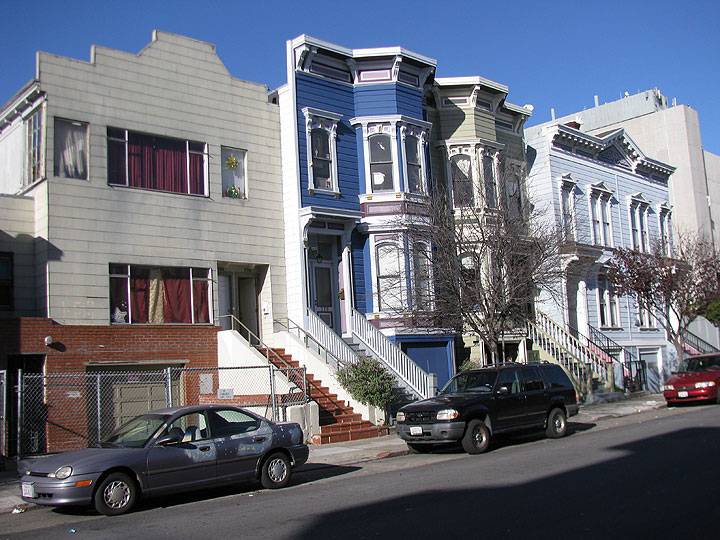 These four homes at 762-778 Capp Street were slated for demolition in 1975 to expand the Bay View Bank parking lot over the whole block between 22nd and 23rd. But they are still standing in 2013.

Remarkably, by the end of the same May weekend, a company spokesperson announced that Bay View would renovate and sell four buildings they had bought two years earlier on Capp Street between 23rd and 22nd. The bank had originally planned to extend their parking lot, which takes up most of the block, but after acquiring the properties the City rezoned the lots from commercial to residential, blocking the S&L’s plans. Moreover, two tenants had refused to move and were on rent strike, one for almost 18 months. Bayview Bank denied they were capitulating to terrorist demands, arguing that they were prevented by federal banking regulations from owning rental property, and their announced intention to renovate and sell was entirely unrelated to the bombing they had suffered two days earlier. “The NWLF is taking credit for something we were going to do anyway,” claimed the unnamed bank spokesperson after the group had declared victory and removed Bay View from its “scumlord list.”

The New World Liberation Front was a Marxist-Leninist-Maoist underground group with several “cells” who carried out a bombing campaign from approximately 1972-1978 in the Bay Area and the Northwest.