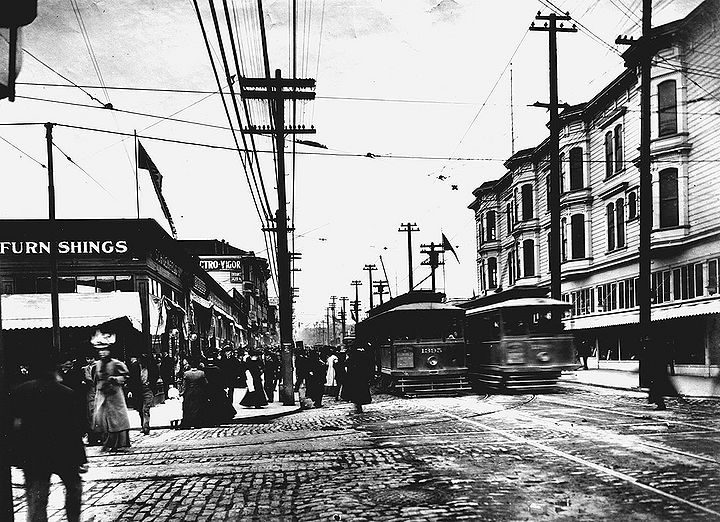 Although some upper-middle-class businessmen and professionals were to be found throughout the Mission District, these groups appeared in larger proportions elsewhere in the city. Before 1906, and to a great extent before World War II, the Western Addition was home to much of San Francisco’s upper middle class. The Western Addition formally refers to the area opened for residential construction in 1855, west of the survey previously in effect, extending from Larkin Street to Divisadero, north of Market. The destruction in 1906 stopped at Van Ness, leaving the rest of the Western Addition relatively unscathed by earthquake and fire. Before 1906, Van Ness was a street of elaborate mansions, and Polk Street (one block to the east) was an area of small shops and stores. Frank Norris chose Polk Street for the location of the dental office and sleeping room of the title character in his first novel, McTeague. After 1906, Polk and Van Ness both became commercial thoroughfares. 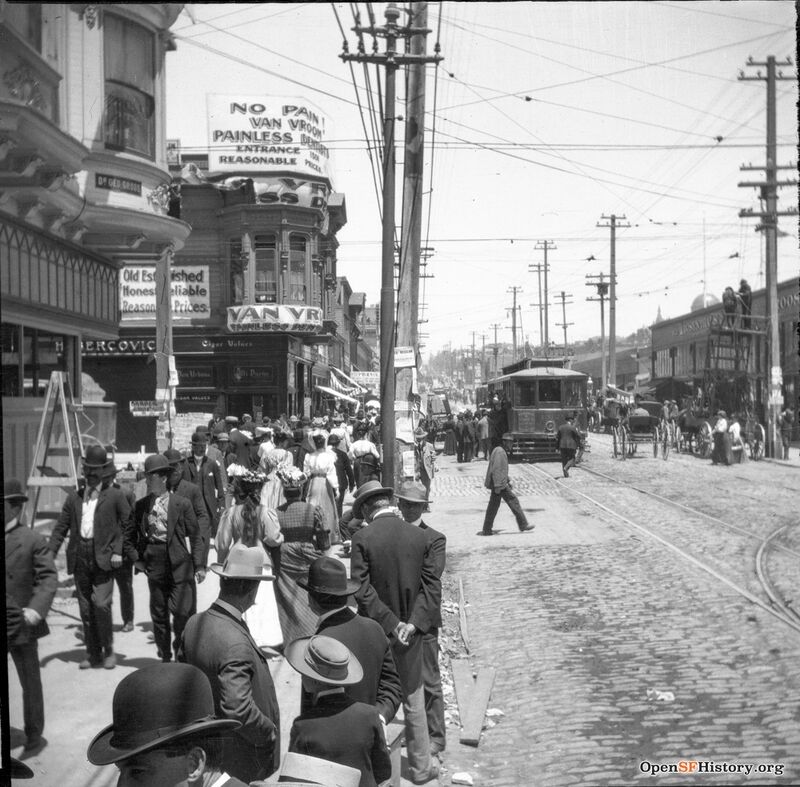 Fillmore and O'Farrell, 1908, during the heyday of Fillmore Street's life as the center of San Francisco retailing.

Fillmore Street, a shopping thoroughfare running north and south through the center of the Western Addition, briefly became a commercial center for the city after 1906, before the downtown stores were rebuilt. As that happened, some of the houses around Fillmore began to be subdivided into apartments, and the Western Addition began to change from an upper-middle-class neighborhood of homeowners. At about the same time. Japantown began to develop along Buchanan between Geary and Pine. Following World War I, a black neighborhood developed nearby, west of Fillmore between Geary and Pine. Before 1906, however, the Western Addition remained largely upper-middle-class and upper-class, home to businessmen and professionals. The houses were similar to those elsewhere in San Francisco in the late nineteenth century—two- and three-story rowhouses, with little or no yard in front. Reflecting the higher income levels and social pretensions of most Western Addition homeowners, many of their houses were both larger and architecturally more elaborate than those of the Mission District. Harriet Lane Levy’s description of the 900 block on O’Farrell could have been repeated time and again for much of the rest of the Western Addition:

The houses on the north side of O’Farrell acquired variation by the swell of a bay window, or the color of a painted surface. All buildings gave out a fine assurance of permanence. . . . The planked street, held together by thirty penny spikes, resisted the iron shoes of the heavy dray horses. Houses, sidewalks, street were of the best wood provided by the most reliable contractors, guaranteed perfect.(22)

In the heart of the Western Addition, about 95 percent of the population lived in families in 1900, and—unlike most of the rest of the city—women outnumbered men. About 30 percent of the people were foreign-born, and three-quarters were of foreign parentage. Here were to be found the largest concentrations of Germans in the city. Here too were significant numbers of Asians, probably half of them in Japantown, the others throughout the area as live-in servants.(23) 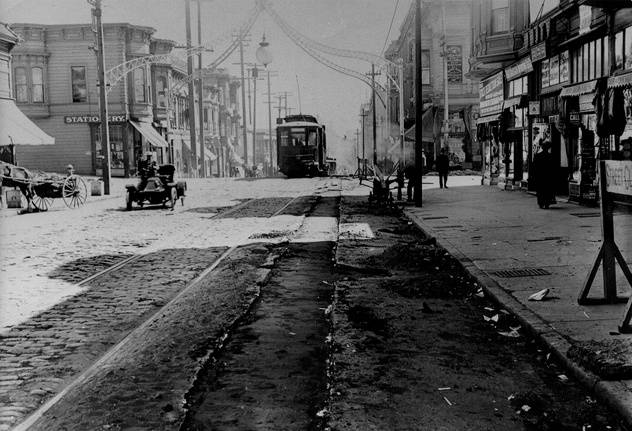 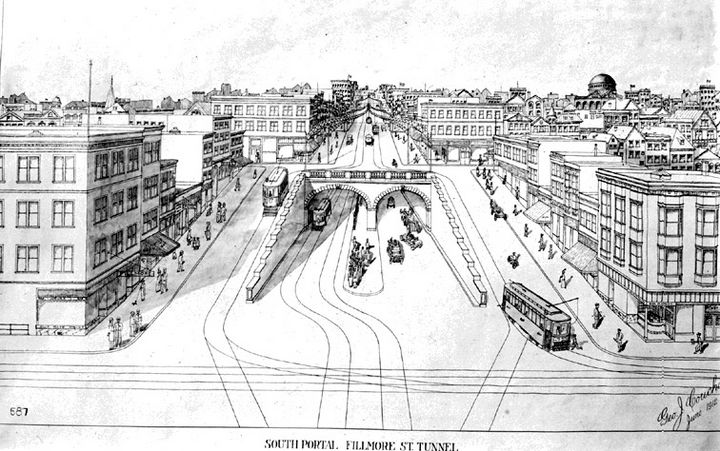 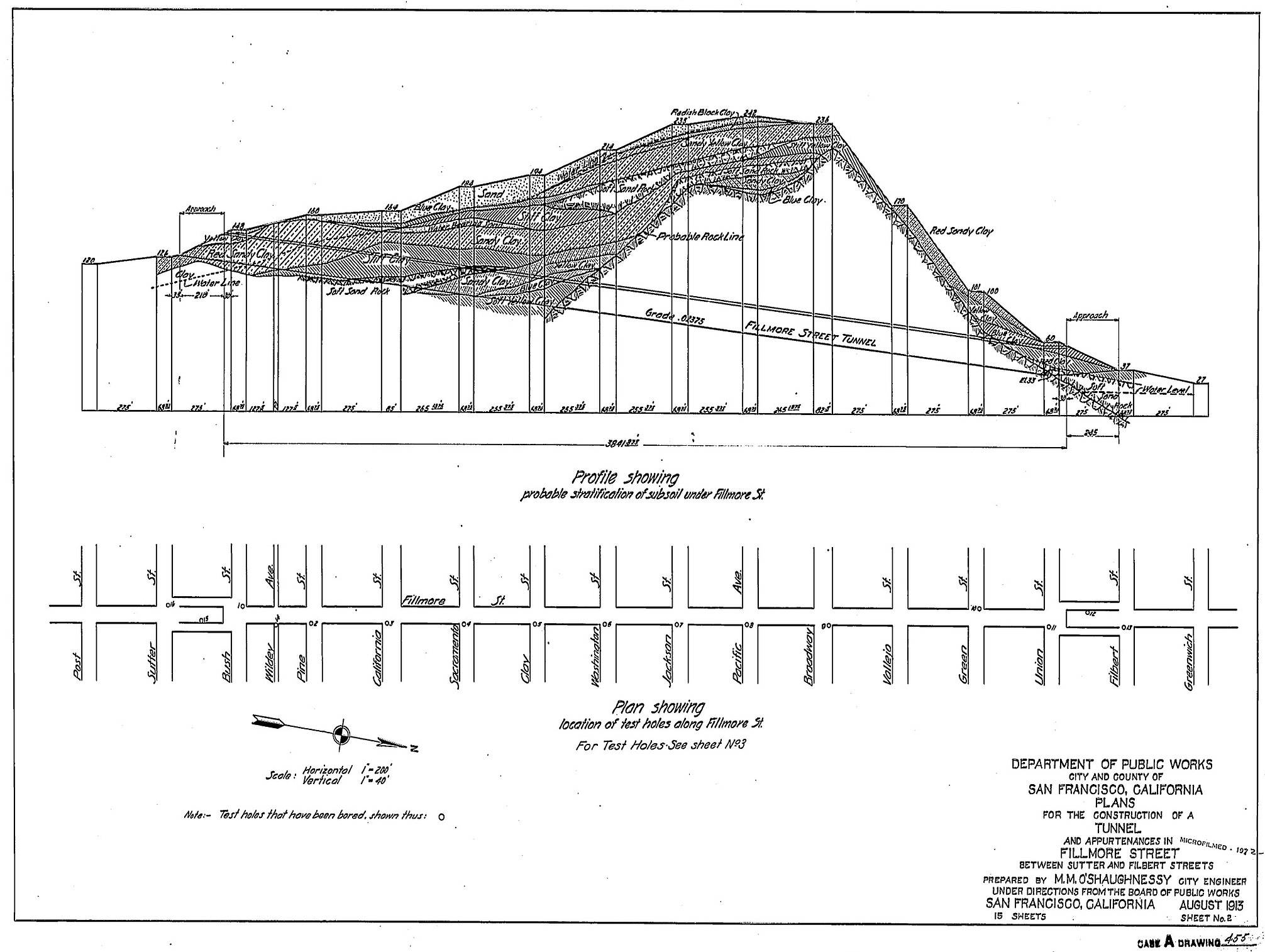 The 1700 block on Bush Street had many of these characteristics. There were twelve houses on that block and twelve families, one—and only one— per house. Two families, both headed by widows, each had two boarders or “guests.” Ten families had a live-in servant, and one family had two. Nine families owned their homes, three rented. Families here, as in the Mission and South of Market, were large. Four consisted of three people, two had four or five, and six had six or more. Of the forty-one adults, not including servants, twenty-four had both parents born in Germany and Austria. Eight had one or both parents Irish, six had one or both parents born in England or Scotland, two were of French parentage, and two had both parents born in the United States. Among the twelve servants, four were Irish, two were Chinese, and only one was born in the United States. In only two families, both of them Irish, was the servant of the same ethnic background as the family.(24) 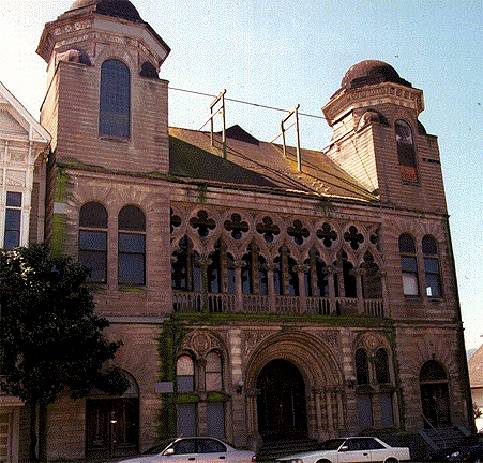 The occupations of all residents of the 1700 block on Bush are clearly identifiable. Of the twenty-three adult males, the largest number were merchants: a father-and-son crockery business, a partner in a wholesale notions company, a partner in a clothing company (wholesale, manufacturing, importing), a retail cigar store owner, and a father-and-son cigar-importing business. Others on the block were employed by merchants. Leopold Baer’s son Sam was a clerk at Sachs Brothers, selling gentlemen’s furnishings; his other son Henry, sixteen years old, was a notions clerk, most likely in his father’s business, Gerson and Baer. Arnold Pollak’s son Berthold was a salesman for Zellerbach and Sons, paper merchants; his sixteen-year-old son Irving was a stationery clerk, perhaps for the same firm. Joseph Adelsdorfer’s son Max was a manufacturer’s agent, and Anna Herrold’s son was a clerk for the Harbor Commission. Bella Clapp, boarder with Anna Herrold, was the bookkeeper for a firm of wholesale grocers, and the brother of Rabbi Nieto was a tea salesman. In all, eleven of the streets twenty adult males who were employed were in merchandising. Morning on the block must have seen a parade very like that recalled by Harriet Lane Levy from her childhood a few blocks away:

At nine o'clock every morning the men of O'Farrell Street left their homes for their places of business downtown: dressed in brushed broadcloth and polished high hats, they departed soberly as to a funeral. The door of each house opened and let out the owner who took the steps firmly, and, arriving on the sidewalk, turned slowly eastward toward town. A man had not walked many yards before he was overtaken by a friend coming from the avenue. Together they walked with matched steps down the street. All the men were united by the place and circumstances of their birth. They had come to America from villages in Germany, and they had worked themselves up from small stores in the interior of California to businesses in San Francisco.(26)

In addition to the merchants and clerks on Bush Street, three adult males were at school, two of them brothers, both at dental school. The remaining adult males included a piano teacher, a lawyer, a mining investor, a rabbi, and the French consul: one, seventy-year-old Cornelius Driscoll, listed himself simply as “capitalist.” All were in white-collar occupations. There were also two live-in Chinese cooks. In addition to Bella Clapp, the bookkeeper, twelve other women were employed: Kate Maroney’s daughter and one of her boarders as schoolteachers, one as a live-in governess, and nine as live- in servants. 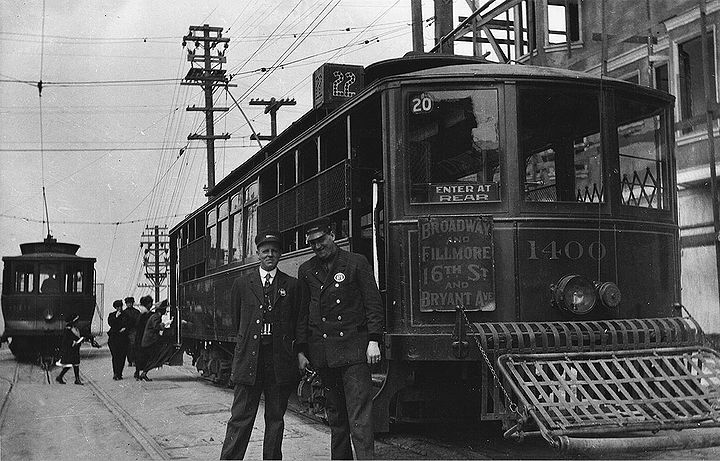 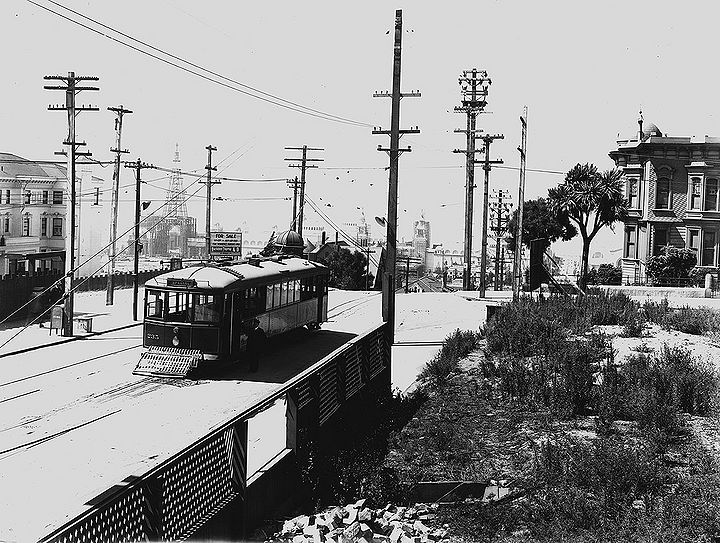 The Western Addition after 1906 became more Jewish in the same way the Mission District became more Irish. However, a wide variety of other groups could be found in the Western Addition, just as many groups other than Irish lived in the Mission. Virtually all Protestant denominations had communicants in the Western Addition—Baptist, Disciples of Christ, Congregational, Episcopal (four), Lutheran (one English, one German), Methodist (one English, one Japanese), Presbyterian (five), and Unitarian. There were also five Catholic churches, including St. Mary’s Cathedral. A bit later a significant Russian community developed in the Western Addition, complete with church and school. Lowell High School was on Sutter between Gough and Octavia, Sacred Heart Academy was at Franklin and Ellis, and St. Paul's Lutheran conducted a German school at Eddy and Gough. There were also other public and Catholic primary schools scattered throughout the district. King Solomon’s Masonic Lodge met on Fillmore, as did also the Workmen and Foresters. Other social institutions catering to Western Addition residents were located in the downtown area, among the offices of wholesale and retail merchants.(27)