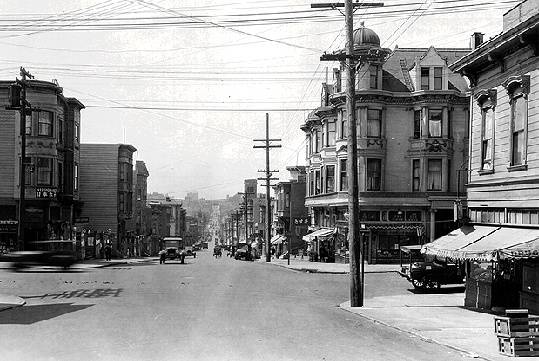 The area was built up after 1858 as the city's first middle-class expansion. The district's middle-class quality was lost after the 1906 earthquake when refugees poured into the neighbor-hood and threw up shacks and odd structures in every conceivable lot and corner. By the 1950s this diverse and relatively chaotic assortment of structures, dating from the 1800s, was seen as a cause of delinquency and public health problems.

The Western Addition A-1 clearance project led to the redevelopment of Japanese in Western Addition Japantown and the Geary Boulevard corridor in the early 1960s. Once built, the surrounding area appeared even more blighted by comparison, so redevelopment monies were directed toward continuing the removal of old housing stock. --Chris Carlsson