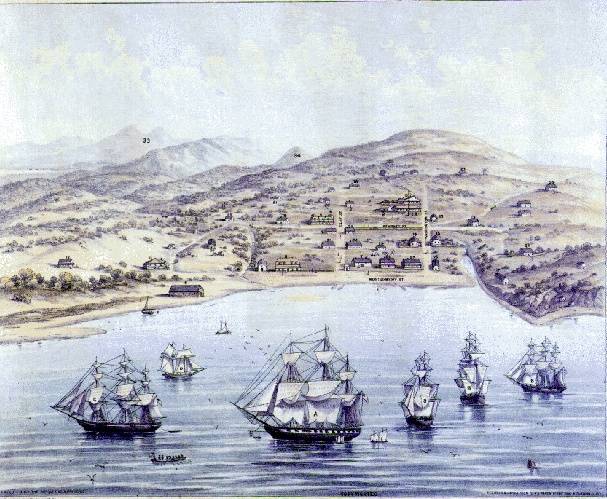 In 1849 San Francisco had approximately 1,000 inhabitants; by 1856 the population had soared to 50,000. Such meteoric growth had never quite been seen before in the 19th century. Visitors, as well as residents, were often amazed that such a significant city, the largest of the west coast, could come into existence in such a short span of time. In late 1849 a French observer wrote: "At San Francisco, where fifteen months ago one found only a half dozen large cabins one finds today a stock exchange, a theater, churches of all Christian cults, and a large number of quite beautiful homes." As the years went by the astonishment did not wane. In 1856, the Golden Era wrote of San Francisco: "That a city of the respectability of our San Francisco, could be raised in the short space of five or six years, appears incredible ... possessing the appearance of an old city of a century, it conveys to the mind the idea of being but within a day's journey to the Emporium of the Union."

Looking back, it seems so obvious and inevitable that a bustling city would rise at the tip of the peninsula and tower over the great bay and its entrance. When observing its graceful Victorians covering the rolling hills, the majestic Golden Gate bridging the entrance to the bay and its vibrant cultures, how could one doubt that San Francisco would ever be? Everything seemed to indicate that the place was long ago destined for a great metropolis unlike any other on the American continent. San Francisco's location and growth, however, was anything but foreordained, and had much more to do with factors human and fortuitous than with fate. From the very beginning, San Francisco faced stiff competition in its the quest to become the dominant city of the bay. Even when it established its superiority over neighboring cities, San Francisco did not mature without pains: several boom and bust cycles were experienced, fires repeatedly destroyed the urban core, and crime and poverty were widespread. Furthermore, stable social relations and communities took root slowly because of the gold rush fever and the transient nature of the population. 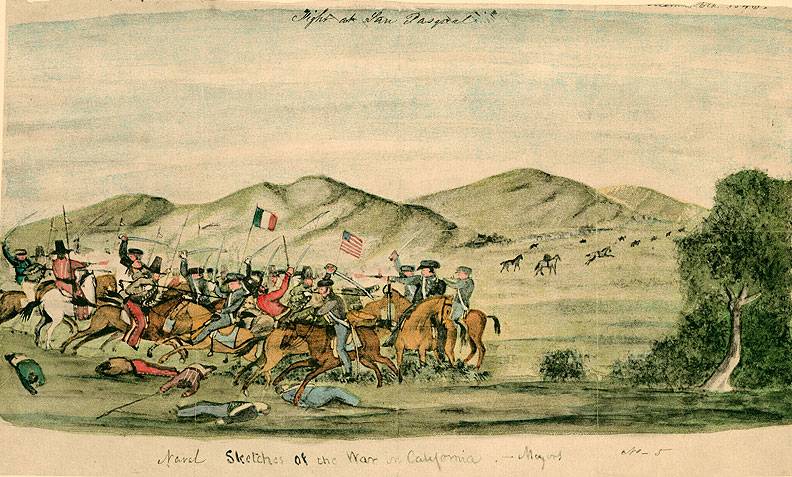 In any event, the American conquest of California in 1846 and the discovery of gold in the Sierra foothills in 1848 insured that a certain degree of urbanization would occur along the shores of San Francisco Bay. The geography of the region and the period's transportation technology were the two essential factors that guaranteed that a city would emerge along the bay. As the rush towards the gold fields swelled, two main cities emerged as the distributing points to the mining regions: Sacramento and Stockton located on the Sacramento and San Joaquin rivers. These two rivers could only be navigated by ships with keels of ten feet or less. However, the clipper ships, which brought all the imported* goods to San Francisco Bay, drew more than ten feet and this created the need for a site along the bay to allow for the transfer of goods to smaller ships. As it turned out, San Francisco became the port of transfer.

While the specificity of the period's transportation technology accounts for the emergence of a settlement along the bay, it does not explain why urban development occurred precisely at San Francisco at the northeastern portion of the tip of the peninsula. In fact, Yerba Buena Cove, the original nucleus of modern San Francisco, was a less than ideal site to establish a settlement. It was surrounded by numerous steep hills, there was limited level ground, the water supply was poor and timber for construction was far from abundant. To add to this already unfavorable list, the climate in Yerba Buena was much less agreeable than in other parts of the bay: the weather was colder and the wind blew almost daily bringing in fog and creating swirls of dust and sand. Today, these factors seem like minor inconveniences but at a time of much more limited technological advancement they could make life quite difficult. While Yerba Buena did have access to a sheltered, centrally located harbor, several other sites along the bay would have allowed much easier settlement. The Contra Costa shore and the Benicia area, for example, had much better lands, weather and timber resources. Why then did the bay's main city emerge at the tip of the peninsula and not elsewhere? Numerous short and long-term factors help explain this unique occurrence.

One of the most important factors that led to the final settlement at San Francisco was the Spanish founding of a mission and presidio at this location in 1776. The Mission of San Francisco (founded by the Franciscan order), better known as Mission Dolores, and the presidio were established to protect Spain's claim over Alta California from other interested European powers. With the arrival of priests and soldiers and their families, and the presence of a few converted natives, a town arose around the Mission Dolores. The Spaniards founded several other missions around the bay at San Jose, Santa Clara, San Rafael and Sonoma. With the years, small towns emerged around these missions, particularly at San Jose, the oldest town in California. With Mexico taking control of California in 1821, an increasing number of large land grants were awarded to former officers and prominent families so as to encourage the settlement of lands. Around the missions of the Bay Area, several land owners set up large ranches and raised cattle for the trading of both hide and tallow. The ranchers, or Californios, would trade mainly with East Coast vessels that brought in finished goods.

In 1835, an Englishman named William Richardson decided to establish himself as a middleman between the Californios and the East Coast merchants. Using two small vessels that belonged to the Mission Dolores, Richardson served as the liaison between the Bay Area ranchers and the ships that anchored in the Bay. He began his operation at a cove located on the eastern tip of the peninsula and only a few miles from Mission Dolores. This location, called Yerba Buena Cove, was convenient because it was close to both the Mission and the East Coast vessels, which often anchored at the cove for shelter and proximity to the bay entrance. Starting in 1836, other entrepreneurs began to settle at Yerba Buena. In 1840, Jacob Leese, Yerba Buena's second settler, sold his holdings to the Hudson Bay Company. By 1844, there were about a dozen houses. Initial growth at Yerba Buena, the site of the future city of San Francisco, was thus based primarily on commerce. The town arose by serving as the point of exchange for the trading of goods between the Spanish-Mexican ranchers and the East Coast vessels. 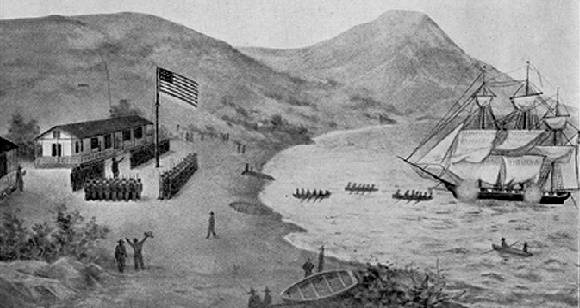 Another very important factor that strengthened the town of Yerba Buena was the war between the United States and Mexico between 1846 and 1848. Although the Bay Area did not witness any battles or military activities beyond the peaceful landing of troops and the hoisting of a US flag at Yerba Buena on July 9, 1846, the American conquest was a critical factor in locking urbanization at Yerba Buena Cove. Indeed, because Yerba Buena was the Bay Area's largest town, first the US invasion itself occurred at that site and secondly the US army established most of its operations there including the troops quarters, the quartermaster's store and the customhouse. This governmental patronage gave Yerba Buena a marked advantage over other settlements and boosted the town's economic prospects.

The third element that anchored development at Yerba Buena was the arrival of a ship on July 31, 1846, carrying about two hundred Mormons. Ironically, these Mormons were fleeing religious intolerance in the US but by the time they had finished their long trip around South America, California had become a US territory. In any event, the arrival of these Mormons, most of whom never left for Salt Lake, doubled the population of Yerba Buena.

With the prospect for commerce, the arrival of Mormons as well as deserting sailors, and the governmental patronage resulting from the Mexican-American War, Yerba Buena quickly outgrew other Bay Area villages. Yet despite being the bay's main settlement, Yerba Buena did not go unrivaled by other settlements. Well before the discovery of gold, a village at the mouth of the Sacramento river, later known as Benicia, was being promoted by a number of strong local capitalists. The latter tried to make this village the capital of the bay by, among other things, naming it Francisca to create an association with the well-known Bay of San Francisco. Thus it was that on January 30, 1847, the Alcade or mayor of Yerba Buena issued a proclamation** renaming the town San Francisco, a move further strengthening the town's dominant position. During the year 1847, six vessels entered the bay to engage in trade. The exports for that year were valued at $49,597 and the imports were worth $53,589. The population was approximately 450 inhabitants. By 1848, San Francisco's population was between 800 and 1,000 people depending on the estimates. By the time the Gold Rush began in earnest during the Spring of 1848--gold was discovered on January 24, 1848--San Francisco was thus a large enough town to attract the significant commerce resulting from the gold discovery.

Ironically, most of the factors that gave rise to San Francisco lost much of their importance after 1848. The Mexican-American hide and tallow trade paled in comparison to the commercial boom induced by the gold industry; the war with Mexico ended in 1848 and some of the governmental patronage actually shifted to Benicia; and after 1848 the Mormons represented only a fraction of the population due to the massive influx of peoples from all over the world. Furthermore, to add to these transient factors, the clipper ship, which created the need for a city by the bay had only been invented shortly before the Gold Rush. Despite the ephemerality of these factors they were crucial in that: first they led to urbanization at Yerba Buena Cove and secondly they gave San Francisco a significant head start over all other villages. While San Francisco was not a big town, its population of about one thousand by 1848 made it much larger than any other settlement in the Bay Area. When the Gold Rush occurred, this advantage proved crucial and led to further, much more intense, urbanization at San Francisco. Indeed, thanks to its size and level of development, San Francisco was able, more than any other settlement, to serve as the chief port of arrival and transfer for the huge influx of people and goods en route to the mines. When the Gold Rush swelled in late 1849 (by the latter half of 1849, immigrants arrived at the rate of 1,000 per week by sea alone and by 1850 San Francisco's population was 25,000) San Francisco underwent massive growth and by virtue of its size became the de facto capital of the Bay Area. In fact, it became the first major city of California.

The growth San Francisco underwent was so overwhelming and chaotic that it destroyed its one natural advantage: the Cove of Yerba Buena. Wharves extending into the Cove were being built frenetically by merchants who were attempting to capture the trade of incoming vessels. As all sorts of waste was being thrown into the bay below the wharves, the cove rapidly became landfill. This was the first in a long series of ecological transformations induced by commerce and the explosive, uncontrolled growth of the metropolis. Yet, despite the destruction of its one natural advantage, the skyrocketing of prices and competition from other towns, by 1849 San Francisco had already outdistanced all rivals by becoming the nucleus of the mad logic of growth and profit-seeking which engulfed the entire region.