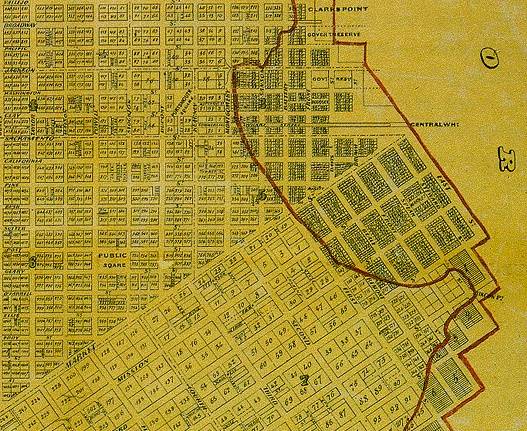 Map of Yerba Buena cove water lots to be filled in, 1851.

The story of Mission Bay is in some ways a microcosm of the entire city's history. The area was subject to wild real estate speculation, at first on the water rights, and later on the new landfill.

H.B. Tichenor built a marine railway to haul up ships for repair off Steamboat Point at 2nd & Townsend in 1851. He purchased the adjacent water rights to land under Mission Bay for $2,700. By 1868 Central Pacific Railroad bought the same lot for $250,000. This gives a hint of what was to come in wild price fluctuations and ownership rights over the future land of Mission Bay, most of which was sold and sold again as water rights, first by the City of San Francisco, then by the State of California. 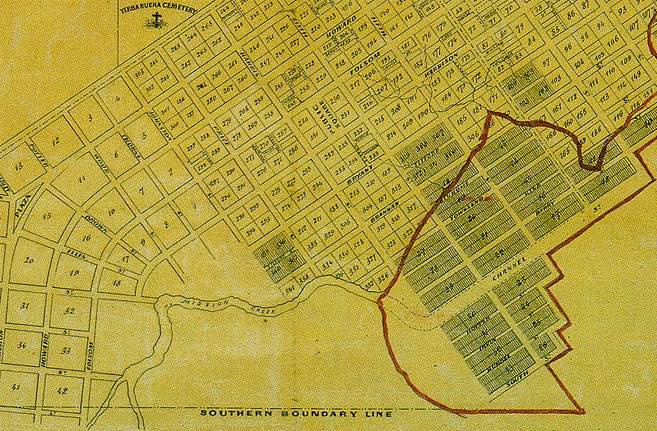 The red line indicates the original shoreline of Mission Bay, and the "made land" is indicated by gray rectangles.

Dr. Peter Smith appeared in 1850 and disappeared from SF in 1854. Before he left, he took care of SF's indigent population in exchange for promissory notes issued by the City. In 1851 he demanded to be paid in coin for his notes. He won a court judgement and forced the City to sell available real estate (mostly water lots) to pay his claim. The first great Peter Smith sale took place on June 14, 1851, followed by four additional sales, all of which were conducted under the public notice that . . . the public is hereby notified that the city has no legal title to said lots. . .a purchase made at the Sheriff's sale will convey no title. . . By now San Francisco had sold thousands of acres for very little return, and much suspicion was raised as to whether it was a deliberate effort to depress prices for the water lots or what. State Senator David Broderick, whose name now graces a street running through the Haight and Western Addition, was the author of many of the bills in the state legislature authorizing the sale of these SF water lots, and bought a number of them himself.

After the State Supreme Court upheld the legitimacy of these rights (later overturned by the U.S. Supreme Court), a flurry of speculative investment took place on Mission Bay water lots. Nancy Olmsted traces two such cases in her valuable book Vanished Waters: A History of San Francisco's Mission Bay: South Beach blocks 7 and 8 were sold by Dr. Peter Smith to John McHenry on June 15, 1851 in a package that included Mission Bay water lot 20, plus other water lots numbering 316, 319, 352, and 580. All sold for a total of $3,975. On September 1, 1853, two years later, McHenry sold blocks 7 and 8 (each containing 8 50-vara lots) to William Cornell Jewett for $50,000. Then Jewett resold two of the block 7 lots for $25,000. Later that week he sold two more lots for another $15,000. By September 15 he sold another lot for $10,000 and recovered his initial investment. He still owned all of block 8 free and clear, and sold another lot and a half of block 7 for another $15,500. He later offered block 8 for $125,000, which was soon sold. Each subsequent buyer was convinced they were getting a great deal and on it went, alongside court decisions first validating and then denying the legitimacy of the claims. 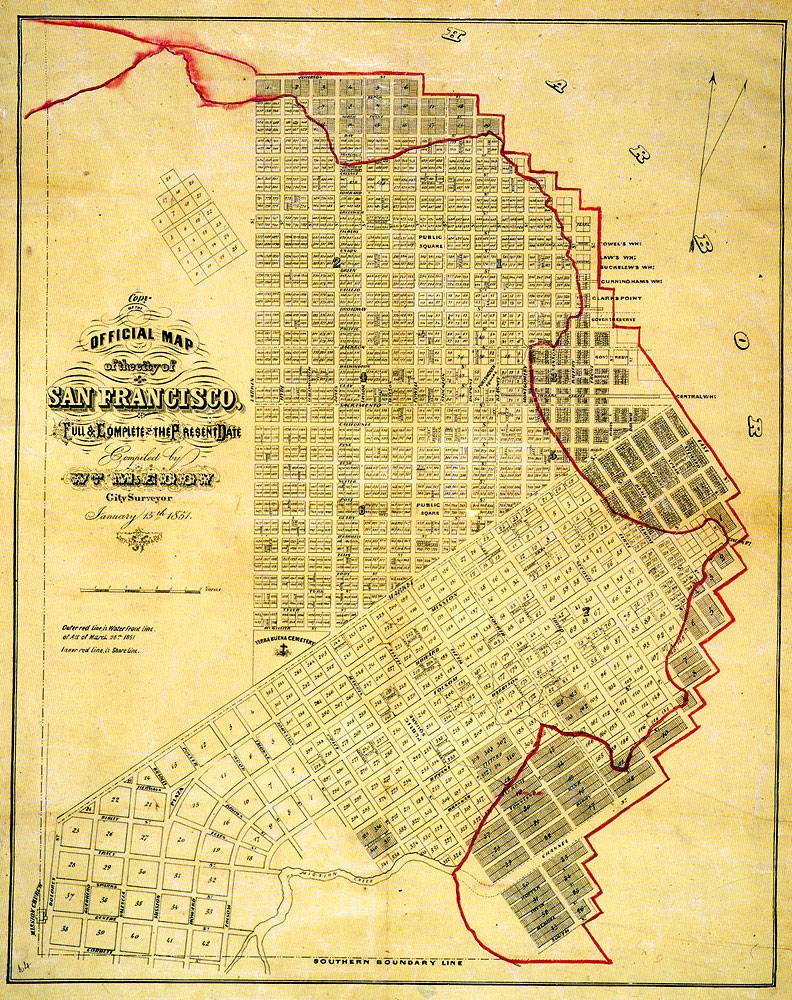