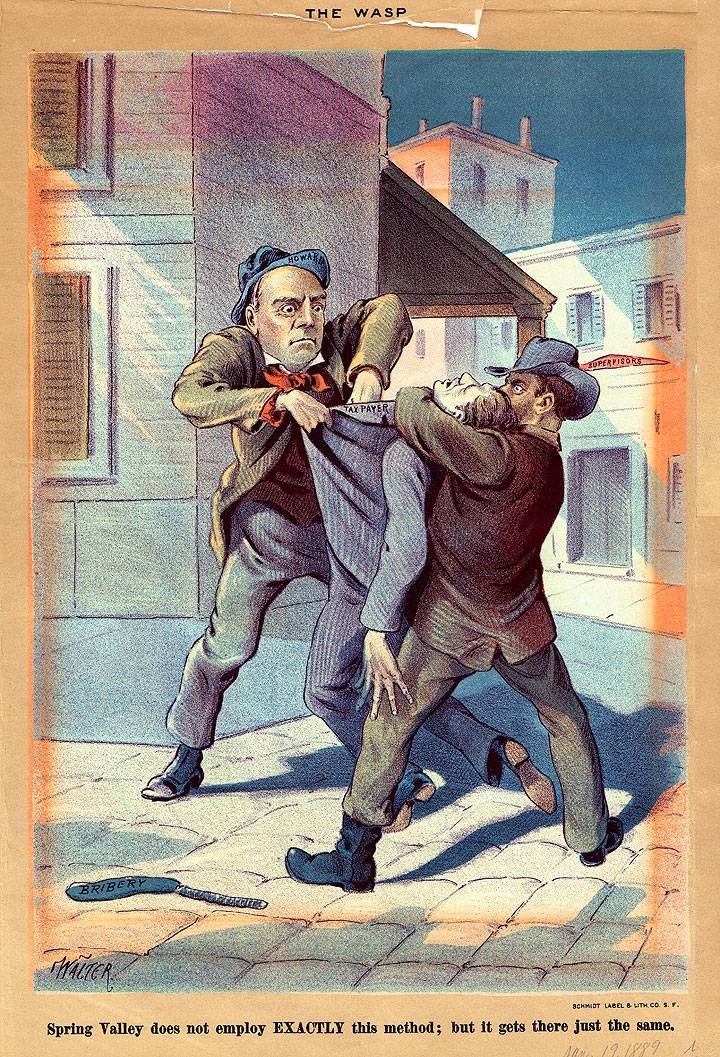 "Spring Valley [Water Co.] does not employ exactly this method, but it gets there just the same..."

The city of San Francisco sits on a semi-arid peninsula. In its earliest days, fresh water was available from the creek under 18th Street next to Mission Dolores, Mountain Lake on the edge of today's Presidio, Lake Merced west of the present-day San Francisco State University campus, and a network of creeks bubbling from springs in the hills and tapping the Ohlone aquifer which lies under the peninsula. Mission Creek meandered down to its outlet in Mission Bay under the present-day intersection of Highway 101 and Interstate 80 (on the street level, approximately Brannan and 9th Streets). Precita Creek ran down from Diamond Heights along the north edge of Bernal Heights (under today's Cesar Chavez Street) to its outlet in the Islais Creek marshes which are now buried by the industrial/warehouse area running east of Bernal Heights and Highway 101 to the bay. Glen Creek still runs its original course from below School of the Arts High School on Twin Peaks (just east of O'Shaugnessy Drive, south of Portola, in the open space known as Glen Canyon) and disappears into culverts to continue its run down to the bay by way of Islais Creek's former wetland outlet. The other original creek still running its original course is in the southwest corner of the Presidio and can be seen running over Baker Beach in the Golden Gate National Recreation Area into the Pacific Ocean. Lobos Creek still provides millions of gallons a week to the Presidio, which has exclusive water rights. The Ohlone aquifer is well-stocked with fresh water, mostly free of high toxic content; a number of old wells, especially in the western parts of San Francisco, can still bring forth water from it, though they are mostly forgotten and out of use. During the drought of 1986-1992 talk was heard about tapping the fresh water lying in abundance beneath the city, but the drought broke before it became an urgent necessity. Nevertheless, by the early 21st century, the Public Utilities Commission was working to integrate groundwater into the supplies provided from Hetch Hetchy, and a graywater recycling system was under construction in new parts of town (like Mission Bay); additional plans to construct a new graywater treatment plant are being developed.

A variety of water companies were founded to serve the exploding population of the city during the Gold Rush, but by the 1870's they had been consolidated under the Spring Valley Water Company. Spring Valley's owners prudently bought up the watersheds and water sources in the vicinity of San Francisco and with monopoly control, enjoyed a profitable period during the last quarter of the 19th century. Chronic battles between Spring Valley and the city government over rates led Mayor James Phelan to apply for the water rights to the Tuolomne River in the Sierra.

San Francisco now gets its water from the city-owned SF Water Department, which in turn is managed by the Public Utilities Commission. In spite of public ownership, the looting of San Francisco's residents by water sellers continues.

To learn about the water in San Francisco's old and new landscape, and all the transformations along the way, take our Water Tour below.