Vigilante Raids (from The Big Strike, by Mike Quin) 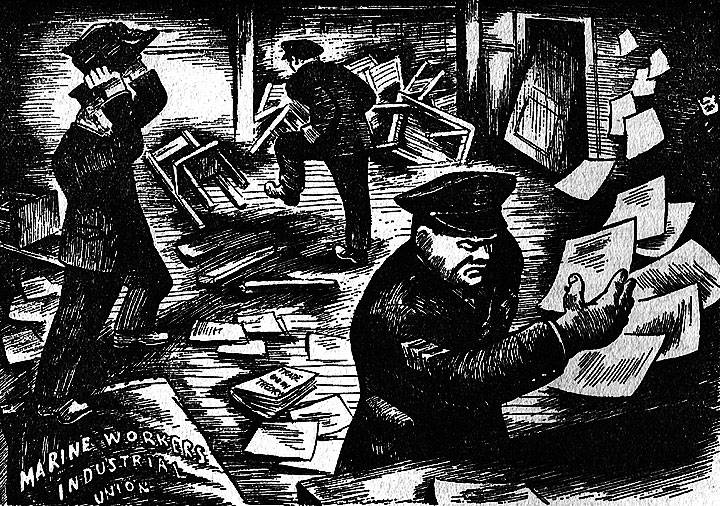 Art by Bits Hayden, from The Big Strike

On the afternoon of July 17, 1934 the National Guard blocked off both ends of Jackson Street from Drumm to Front with machine guns mounted on trucks. The headquarters of the Marine Workers' Industrial Union was located halfway down the block. When the two ends of the street were sealed, police moved in with clubs swinging. They arrested seventy-five persons who were in the hall, then set to work on the building. Furniture was chopped up, windows knocked out, fixtures ripped up, and typewriters smashed. When they were finished nothing remained but a heap of kindling and a vast litter of papers.

From there they moved to the ILA soup kitchen at 84 Embarcadero. Uniformed and plainclothes police combed the line of men, weeding out those they judged to resemble foreigners or Reds and loading them into the patrol wagon. At the station they were booked for vagrancy and thrown in jail.

The Workers' Ex-Servicemen's League, consisting of a majority of unemployed veterans, had its headquarters in a vacant lot on Howard Street between Third and Fourth. An open-air meeting was in progress when the police arrived. The raiding contingent lit into the men with clubs and placed 150 under arrest. Then they systematically wrecked everything on the premises.

From here the flying squadron moved uptown and carried out a series of raids that lasted throughout the day. Scores of buildings and homes were wrecked in a remarkably methodical and consistent manner. Even in their most vehement rage they moved with the smooth-clicking precision of an Elliott-Fisher billing machine. Agents of the Industrial Association's intelligence bureau rode with the police, filling out numbered forms recording exact times of each raid, names of men arrested, and other data.

The plan of attack was identical in every instance. A caravan of automobiles containing a gang of men in leather jackets, whom newspapers referred to as "citizen vigilantes," would draw up to the curb in front of a building. They would let fly a hail of bricks, smashing all windows, and then crash into the place, beating up anyone they found, wrecking all furniture, hacking pianos to pieces with axes, throwing typewriters out of windows, and leaving the place a shambles. Then they would get back into their cars and drive off. The police would arrive immediately, arrest the men who had been beaten up, and take command of the situation. Three men found in the Workers' Open Forum at 1223 Fillmore Street were treated so unmercifully the police had to send them to the Central Emergency Hospital after placing them under arrest.

Not all targets were entirely unprepared, however. Someone had tipped off the Communist Party as to what was coming, so that not many persons were found in their halls and headquarters. Offices of the Western Worker were deserted when the vigilantes arrived. The building faced on Civic Center, a stone's throw from the City Hall, and contained a bookstore and the main offices of the local Communist Party. The raiders spent their rage on furniture and fixtures, throwing articles through windows and smashing everything they could lay hands on. Large quantities of communist pamphlets were thrown out in the street where winds picked them up and distributed them far and wide in true comradely spirit.

At 121 Haight Street, a Workers' School where classes in Marxism and trade unionism were conducted, the vigilantes wrought havoc on the first floor, but when they attempted to mount the narrow staircase leading to the upper stories they were confronted by the huge bulk of David Merihew, an ex-serviceman who worked as a caretaker in the building. Merihew brandished an old cavalry saber in one hand and a bayonet in the other. Flourishing his weapons, he beckoned to the vigilantes to come ahead. They took a few steps forward and he slashed out with his saber, taking a huge chip out of the banister. The raiders discreetly retired and left the field to the police, to whom Merihew surrendered after striking a bargain with them not to turn him over to the vigilantes if he yielded his weapons. 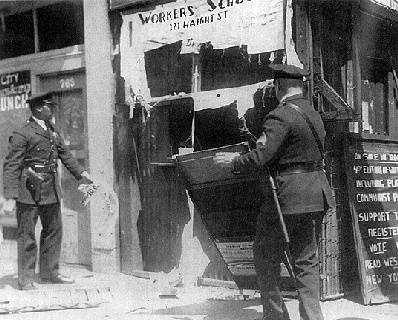 121 Haight Street ransacked by vigilantes during the 1934 General Strike

Across the street and down about a block was the headquarters of Upton Sinclair's "Epic Plan." The records of the Industrial Association indicate that the "finger" had been put on this location also. Another entry read: "There were no police in the crowd storming Communist Headquarters at 37 Grove Street, 121 Haight Street, and the Upton Sinclair Headquarters." (Report No. 296.)

These reports were evidently written out ahead of time because it happened that there was no raid at all on the Sinclair headquarters. The vigilantes either slipped up on their schedule in the excitement or else shied off at the last minute. For another thing, they had to clear out to make way for the police, and it would not have looked right, while the police were taking over 121 Haight Street, for the supposedly unknown and elusive vigilantes to be smashing up a building right across the street.

But if they missed out on one job, they were thorough enough elsewhere. When they had finished with the Mission Workers' Neighborhood House at 741 Valencia Street it looked as if it had been battered by artillery fire. The cavalcade moved from building to building all over town, and when the list of organizational headquarters was exhausted, they started in on private residences. Homes were looted, wrecked, and left in shambles as thoroughly and methodically as halls. By nightfall the jail was packed with some 300 suspected communists, all charged with vagrancy.

Raids of this kind continued for many days and eventually spread through all the towns and cities up and down the Pacific Coast. San Francisco papers carried a warning: "Keep the streets clear of loafers and vagrants.... The police are under orders to pick up every man found on the streets who cannot give a good account of himself." They reported that, "The order is effective from sundown to dawn. Bond for those charged with vagrancy was set at $1,000 each. Police cruising about the city last night arrested every man who was unable to give a good reason for being on the streets."

This was the famous "$1,000 vag law" that the Atherton report revealed as a device for "rousting" underworld characters to make them come through with a "shake-down."

In reporting the raids some newspapers declared the vigilantes were members of the Teamsters' Union. These accusations were vigorously denied by the union. Police said that they didn't know who the men were but believed they were "aroused citizens."

It was not until months later that information gradually leaked out as to their identity. Raiders began describing their exploits "in confidence" to friends and acquaintances. Many of them were strikebreakers brought in from Los Angeles by the Industrial Association to run the scab trucks on the waterfront. A lesser number were businessmen, bank managers, and adventurous members of the industrialists' white-collar staffs.

Police announced that they acted absolutely independently in the raids. The simultaneous attacks by vigilantes and the action of the National Guard in barricading both ends of Jackson Street were reported as unexplainable coincidences.

Newspapers exulted in the vandalism and praised the vigilantes for their day's work. Side by side with accounts of the smashing of halls and headquarters, anti-communist statements of the most bloodthirsty variety were featured. Typical of these was the pronouncement of Michael F. Shannon, newly installed Grand Exalted Ruler of the Benevolent and Protective Order of Elks, who declared it his intention to mobilize the full strength of his fraternal order into "shock troops to combat and exterminate those who would destroy the business of this country, disrupt forever family relations, abolish religion, liquidate American institutions and tear down the flag."

Mayor Rossi issued a statement: "I pledge to you that as Chief Executive in San Francisco I will, to the full extent of my authority, run out of San Francisco every Communist agitator, and this is going to be a continuing policy in San Francisco."

Heaviest emphasis in the press was laid on the phrase "alien agitators," and the central theme was a clamor for their immediate deportation. Communists and aliens were practically synonyms in the language of public officials and the newspapers.

Before the raiding was over, more than 450 persons were packed into a city jail that had been built to accommodate 150. Out of these no more than a dozen turned out to be deportable aliens and no more than three were connected in any way with communist activities. Considering the fact that over a third of the population of San Francisco was foreign-born, this was really remarkable. 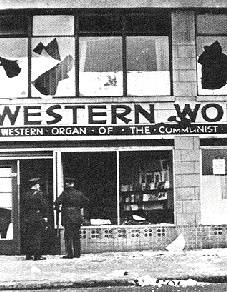 Western Worker ransacked by SF Police and Vigilantes during the 1934 General Strike.