Difference between revisions of "View from Mullen Street in the 1970s"

Listen to an excerpt from "Where Have All the Flowers Gone? A View from the Street in Bernal Heights" read by author Peter Booth Wiley: 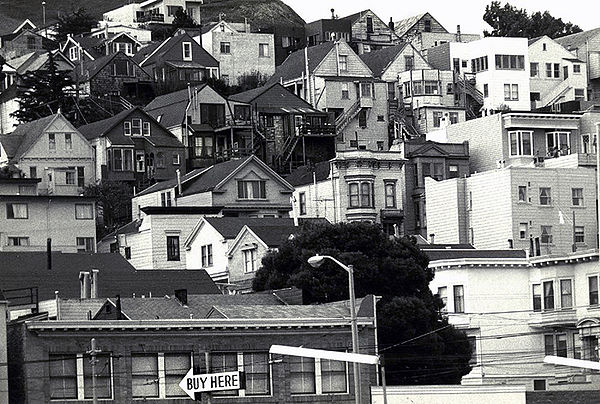 Bernal residential buildings on the west slope near Fair and Mission, c. 1975.

We settled on Mullen Avenue on the northern slope of Bernal Heights in 1968. Mullen was perfect, a quiet street hedged by modest single-storied houses, two chicken houses converted to residences, a shotgun shack, and a couple of two-unit flats. Our house was a roomy, drafty dump with a yard for our dog and space for our daughter to play when she got up on her feet. For many years before we moved there, the house was owned by the Ochoa family. Mr. Ochoa was a longshoreman. The family, his children told us, lost the house due to their father’s drinking. Indeed, when I was digging out the basement where some of the kids had slept in a room with a plank floor laid on dirt, I found an enormous stash of wine bottles behind a rotting wall. Our rent was $150/month.

I bought some paint, and while Carole stayed with our daughter Celia in Berkeley, I painted the two bedrooms, living room, and kitchen-dining room. At the end of the day, waiting for Carole to pick me up, I sat at the top of the stairs that led up from the street sipping from a bottle of my brother’s homemade wine watching the kids play in the street. A group of pre-teen girls dressed in parochial school uniforms—blouse, sweater and skirts with hemlines hiked to the highest level permitted by the sisters—played some kind of ballgame that involved a lot of screaming. Kids playing in the street, a street that was like a giant play yard, this was our new home.

Bernal at the time was largely a working class neighborhood with an odd, but small, assortment of professionals, students, post-grads, a few gay couples (mostly closeted), an occasional beatnik, and a hippie or two including Chet Helms, the rock impresario from Texas who brought Janis Joplin to San Francisco and opened the Avalon Ballroom, and then the Family Dog on the Great Highway after Bill Graham took over the Avalon. One resident who arrived in the late 1950s recalled that someone had said to her, “If you can’t afford to be a starving artist on Potrero Hill, move to Bernal.” The ethnic and racial mix was complex and a definite foreshadowing of the city San Francisco was becoming: White with an emphasis on Irish and Italian heritage, Black, Native American, Latino, Chinese, Filipino, and Hawaiian with numerous admixtures. Clearly, this was nothing I had ever seen in a small-town New Jersey suburb, an elite New England men’s college, or the mighty University of Wisconsin. Nor was it like the poverty-stricken hollows of Eastern Kentucky.

In and around Mullen lived longshoremen, sailors, barkeeps, hotel workers, phone company employees, a waiter, a house painter, a doctor, a gay couple (one of whom was the house husband, the other sold records), a retired bootlegger from Oklahoma, and Killer Diller, an alcoholic retired longshoreman. When you greeted Killer, he responded to his dogs, but his dogs didn’t pass it on. Our first mailman was a lovely, long-legged lady in a miniskirt. You could find her at the Ribeltad Vorden at the west end of Precita Park with the rest of the locals after work. Later she was replaced by Vern, a Native American, who was also an actor. His biggest fans were the neighborhood dogs. When he walked the streets—there were no leash laws in those days—a troop of dogs followed in his path. When he drove his pickup from one part of the hill to another, the dogs rode in the back.

Living was easy. Rents were low, particularly as people began to gather into formal and informal communal living arrangements. For those of us who considered agitation our core commitment, post office, cab driving, and teaching jobs were readily available as were food stamps for those who needed them or could justify the scam. Food was cheap thanks to food banks operating out of people’s garages, which offered basic staples like fruit, vegetables, potatoes, cheese, and grains. And gas was 27 cents a gallon when we arrived. Weed, mostly from Mexico and Panama, none that I knew of from California yet, was also cheap and abundant as were acid (blotter, sunshine, you name it—Stanley Owsley was still the acid king of the Haight), mescaline (real and synthetic), psilocybin mushrooms, and peyote. While some musicians were succumbing to heroin, politicos eschewed “bad” drugs, and cocaine was yet to show its ugly face.

by Peter Wiley, from his essay "Where Have All the Flowers Gone? A View from the Street in Bernal Heights," in the anthology "Ten Years That Shook the City: San Francisco 1968-78" (City Lights Foundation: 2011), edited by Chris Carlsson.