Unsettled: Threading the Life of a Mayan

A migrant day laborer, standing, waiting for work on Cesar Chavez Street, once told me that migration was like a thread. “A friend or family member tells you there is work here. They pull you in, and you pull in the next guy, and the next guy pulls in the next one. It’s a thread that winds onto itself.”

Luis Demetrio Gongora Pat was pulled into San Francisco by Jose, who was pulled in by their older brother Carlos. Carlos was pulled in by a friend also named Luis from Oxcutzcab, and Luis had been pulled in by another Mayan from this same town. The legend goes that Mayans have been pulling each other into San Francisco, since Tomas Bermejo of Oxcutzcab founded Tommy’s Mexican Restaurant on Geary Boulevard in the Richmond District, with his wife Elmy, in 1965. Since then, Mayans from Mexico’s Yucatán peninsula have been arriving to the Bay Area to work in restaurants as janitors, dishwashers, busboys, line cooks, chefs and managers. 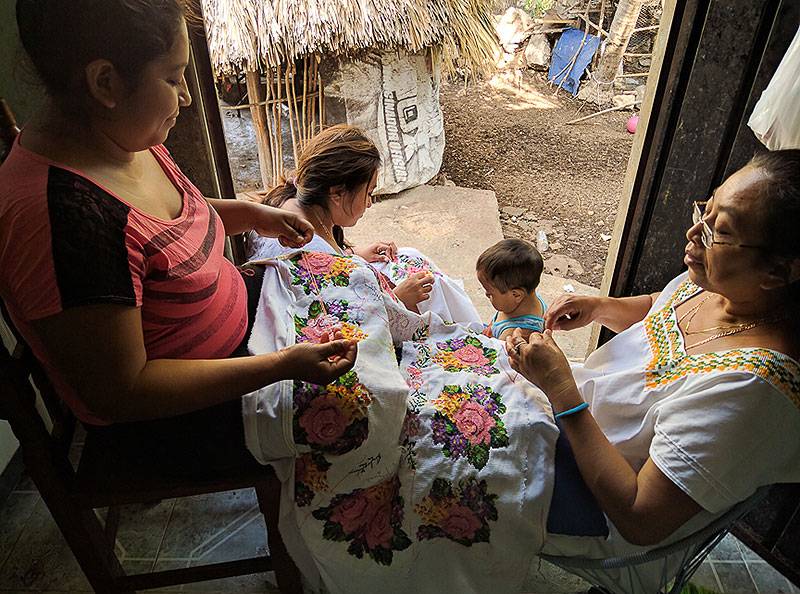 Doña Carmen May Can (far right) embroiders a hipil with (from left) her daughter-in-law Sandy, her daughter Rossana and her grandson, on April 29, 2017.

According to official Mexican government statistics, there are approximately 180,000 Yucatecan Mayans working in the United States of America, of which 38 percent live in the Bay Area, working primarily in the restaurant sector. That’s about 68,400 Mayans living busy about the Bay. Of those, the majority (80 percent) are men, most of whom are peasants from the municipalities of Merida, Oxkutzcab, Cenotillo, Mama, Peto and Muna. For several decades now, Mayans have been abandoning their subsistence farming lifestyle to chase dollars up North to wire back home. Mayans need cash, if they wish to build a house and not just a hut; if they wish to send their children to school and not just to the fields.

Up and down Mission Street, remittance shops are open for business—Mex Express, Ria Financial Services, Sigue Corporation, Order Express, Western Union, Fantastic International Services, Quick Check Cashing Store—awaiting the migrant day laborer to enter and pay a fee to send their hard-earned money back home. Spurred by Trump’s campaign threat that he would set limits on remittances to pay for The Wall, there was a fury of remittances last year from the United States to Mexico. In 2016 remittances reached an all-time high of $27 billion dollars, equivalent to a fourth of the country’s gross national product. Remittances brought in more foreign currency in Mexico than oil exports or tourism. Yucatecans in the United States accounted for 0.5 percent of these remittances, which in 2016 amounted to $142.8 million.

After the election of President Trump, Mayans started jumping ship. A Mayan man, who manages a restaurant in San Francisco, told me, “I cannot find workers. They all left. We are short on dishwashers, line cooks, janitors. The other day we had to pay $40 an hour for a dishwasher through an app, because we couldn’t find anyone. The guy sits around waiting for peak hour looking at his phone to see who will offer him the most and then he chooses. I mean, the cook gets $20!”

When Jose Manuel Góngora Pat was born, he had a twin, who died within the year. There is a belief among Mayans that since twins shared a womb and half the blood of a normal child, that they must be bolstered during their first year of life. By custom, twins are allowed to wander out from an early age to relatives’ homes to receive gifts of food and money. After Jose’s twin died, his brother Luis, older by four years took charge of promenading Jose around town, as soon as he could walk. This was the wit of a child who wanted the benefits of twinhood, but Jose and Luis truly became like twins, despite their different characters. Luis was jovial and vivacious, and Jose relaxed and congenial. 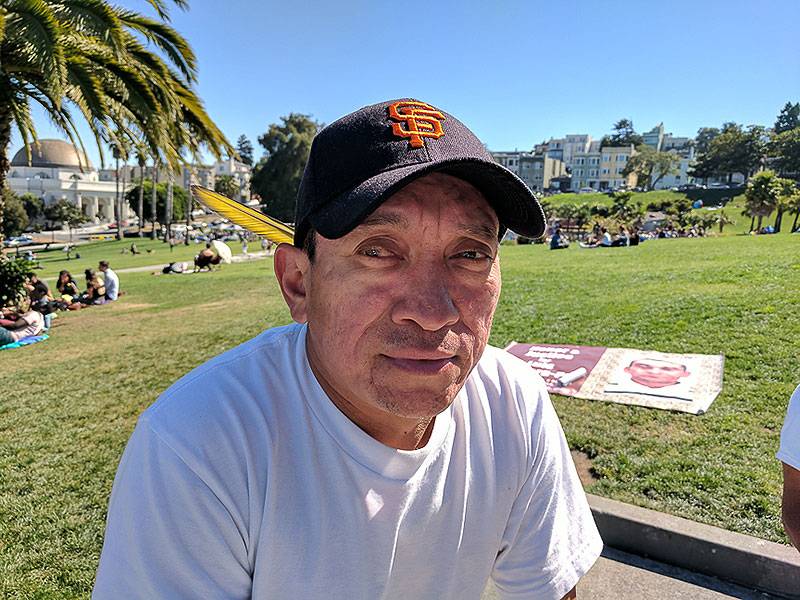 Jose Góngora Pat, at a picnic held to commemorate the life of Luis in Dolores Park, Oct. 7, 2017.

When Luis was 22 years old and Jose about 18, their father took them out to a wild patch owned by the family and taught them how to prepare the field for farming. He took them out once and then a second time. “I felt very proud that our father trusted us,” says Jose. “He taught us how to make the offering of pozole, a specially prepared cornmeal, and ask God for permission to work the field, to clean a field, to burn, to plant, to wait, to take care of the growing crops, and to harvest.” Most Mayans are Catholics, but original customs like this one still prevail. In the field—the “milpa” as we say in Mexico—it is understood that God is in a helpful arrangement with man, but man must pay forward with an offering of pozole. For 19 years Luis and Jose worked the family milpa together.

Luis first laid eyes on Carmen May Can at a town dance, she was 14 and he was 15. “He was entering the hall to dance and I was exiting when he saw me.” Luis would ask to walk with Carmen down the street. “He was very stubborn,” she laughs. “My father finally accepted him since he knew the Góngora family.” Six years later, Carmen and Luis married. Jose married Isabel Yeh Poot soon after. 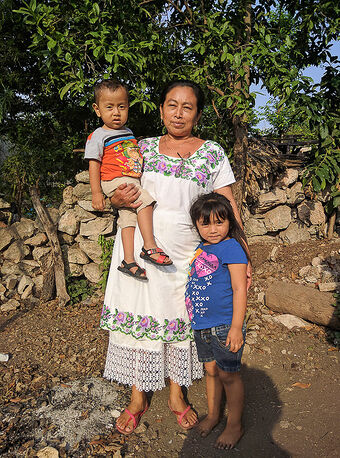 Doña Fidelia del Carmen May Can, widow of Luis Góngora Pat, with her grandchildren, in Teabo, Yucatan, April 28, 2017. <align="right">

The young couples began having children. Carmen remembers, “Luis loved to be with his children at the town festivals. I would carry Luis junior and he would carry Angel. He walked around with that child so much!” Rossana, the youngest daughter, arrived two years after Angel. Jose and Isabel also had children, a son and two daughters.

The Mayan lifestyle provided for many things, but it did not grow cash. The families needed money to buy shoes and other necessities once the kids started school. Luis started going to Cancun to construction jobs while the harvest was growing.

In 2002, Jose was in Oxcutzcab on an errand. Oxcutzcab is just south of Teabo, and while there Jose visited his sister-in-law’s home. His older brother Carlos happened to call from San Francisco. “There was an opportunity to go north, which I felt I could not miss,” said Jose. Luis was in Cancun at the time. There were no cellphones, not even phones then in Teabo. Without a way to communicate this opportunity to Luis, Jose left. When Luis returned, he struggled to keep the milpa going on his own, and figured a way out to head north after José. The fate of one brother was tethered to the other.

Unsettled in the Mission is a series of literary non-fiction essays by Adriana Camarena to be published periodically as supplements in El Tecolote through January 2019. Her writing is based on portraits of the traditional working class and poor residents of the Mission District for an exploration of Latino identities and histories. This is a collaborative project supported by the Creative Work Fund, however, the views and opinions expressed in “Unsettled” are those of the author and do not necessarily reflect those of Acción Latina. 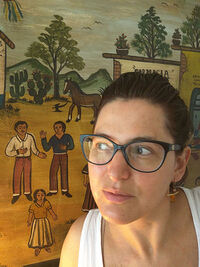 Adriana Camarena is a Mexican from Mexico, complicated by an upbringing in the U.S., Uruguay, and Mexico. She became a resident of the Mission District of San Francisco in 2008. Since arriving in the Mission, Adriana began collecting tales of borders, line-crossings, and overlapping identities told by residents to provide a layered picture of this traditionally working class immigrant neighborhood in California. To learn more about the author and her work, please visit her website.