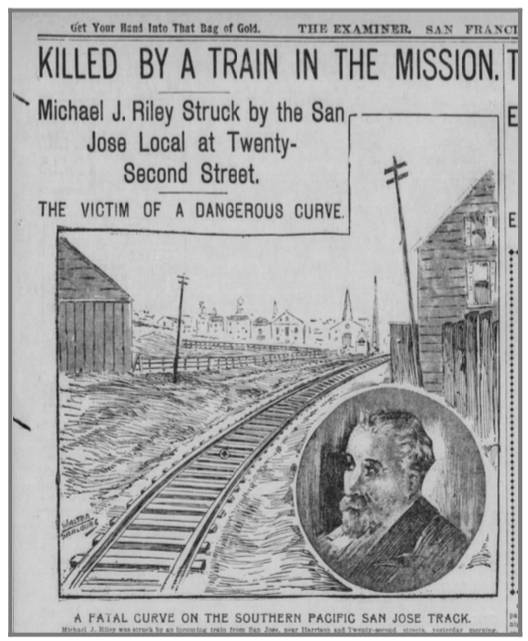 *The San Francisco Examiner, Sept 6, 1898, “Killed by a train in the Mission”. May the spirit of Michael J. Riley rest at the right hand of God and in peace.

On August 18th 1898, a 56-year old woman named Ellen Riley died in her home at 707 Florida Street, which she shared with her husband Michael and five of their seven children. A native of Cork, like her husband and many other naturalized Irish living in the Mission District, she was waked at home, and memorialized at St. Charles Borromeo on 18th and South Van Ness.

Two weeks later her grieving husband was killed by an incoming Southern Pacific train. He’d just purchased a new windowpane from J.H. Kruse’s hardware shop at 23rd and Shotwell, and was walking home along the SP right-of-way between Harrison Street and Treat Avenue with the freshly cut glass tucked under his arm. At 9:30 am, as he neared the intersection of 22nd and Harrison Streets, a train he may, or may not, have heard (grief can preoccupy a person to the point of insensibility) smashed into him.

Riley was thrown 15 feet and died almost immediately, his arms, legs and skull fractured. SP Engineer A.C. Thyle later told a judge he threw the emergency brake as soon as he could, but to no avail.

The San Francisco Examiner reported that the corner where Riley died was particularly hazardous because of the acute angle of the track as it plunged past an old “rookery” and into the intersection. Residents who used the right-of-way as a migratory route through the neighborhood, resented the blind spot that made an otherwise perfectly good pedestrian corridor into something unpredictably violent. They had complained about the hazard, but their protests were “ignored”.

There are no trains now, but the right-of-way has maintained its ability to disturb the neighborhood. Today, the complaints center on the fact that no one knows who owns the right-of-way, least of all the San Francisco Assessors-Recorder’s Office, who assess the value of all property in the city. They didn’t know until December 2017 that the State Board of Equalization had transferred the parcel containing the right-of-way to them ten years before.

Two years and several articles later, no assessee or owner has been found. Assessor-Recorder Carmen Chu’s office has steadfastly claimed to have tried to identify the assessee (this, it turns out, is different than the owner) while just as steadfastly refusing to discuss exactly what they’ve done, how they’ve done it, or what they know.

In general, nobody’s talking. The only thing that seems to haunt the place isn’t the battered ghost of Michael J. Riley, but the spirit of Gilded Age obfuscation, leftover from the days of the railroad barons.

In the instance of the strange case of the right-of-way-nobody-owns (this is what I believe to be the case), there are only known unknowns. Most of them are kept in a banker’s box in the Superior Court of California’s storage space in Contra Costa County. If you request this box from the staff of the reading room at the San Francisco Civic Center Courthouse at 400 McAllister Street, it will be brought to you in due time, and you will be free to peruse roughly 800 legal documents that comprise the 1992-1996 “Southern Pacific Transportation Company vs Earnest R. and James W. Heinzer First Amended Complaint for Quiet Title, Trespass and Slander of Title”. This is the formal name of the legal action, which is the last time someone took legal action to prove or “quiet” title. The link will take you to a page which has most of the important documents listed in date order with summaries which outline their content.

Southern Pacific’s legal action against the Heinzers took five years to settle and was inconclusive. Initially, Southern Pacific included other property owners in the lawsuit, who meekly moved their stuff off the right-of-way– this is the “trespass” part of the action–leaving only the railroad company and brothers James and Earnest Heinzer to spar under the jurisdiction of Judge Daniel M. Hanlon.

The Heinzer brothers, whose mint green warehouse still stands on the west side of the right-of-way, were one of four businesses who received shipments of freight from Southern Pacific Transportation Company. The Heinzer’s warehouse and the Atlas Stair Company are the only buildings left on the right-of-way from the era of rail deliveries to Mission District manufactories.

In 1991, Southern Pacific, faced with a shrinking customer base along the “old main line,” stopped service and tried to sell the right-of-way for about a million bucks. The Heinzers objected to this, saying they risked being put out of business if the trains stopped delivering their freight (this was a spurious claim–they, like other small industries in the area, were getting their stuff delivered by trucks.) Later, after offering to buy the right-of-way for far less than it was worth, they filed a quit claim deed they got from a distant relative of John Center, the original landowner, and a notice to preserve interest in the parcel.

Southern Pacific Transportation Company objected to all of this–this is the “slander of title” part of the lawsuit–and filed suit. The rest would have been history were it not for corporate reticence, the inaccessibility of the legal documents and the understandable reluctance on the part of the public to reading the legal documents in order to understand what happened.

The 1994 judgement is mercifully clear on that: Judge Hanlon found that Southern Pacific didn’t own the parcel, and had only inherited an easement from the predecessor railroad, the San Francisco-San Jose railroad, which ran through the land donated by John Center, the 19th century land baron who bought and sold real estate in the Mission from 1850 until his death in 1909. An “easement” means you have the right to use the land, but you don’t have the privilege of selling–and profiting–from it.

Reading the legal documents is a real slog, but there are moments where plain language pokes its head over the parapet of legalese and makes the situation a bit easier to understand. The John R. Hetland Deposition is one of those moments. Hetland, a respected and beloved professor of law at UC Berkeley, and expert in real estate law, was retained by Southern Pacific as an expert witness. In his deposition, Hetland takes pains to explain why he felt the Heinzers had no claim. He foresaw the confusion over ownership and suggests on page 36 that asking Southern Pacific for their side of the story might help clear matters up.

I doubt this would have helped. Southern Pacific, which went out of business about three years after Hetland made this suggestion, didn’t like discussing its business with the general public. Neither does Union Pacific, the purchaser of Southern Pacific’s assets. They have, however, disclaimed any interest in the right-of-way in emails to me.

I imagine the original title, which was drafted in 1863, was handwritten in ink that faded from purply-blue to puce as the decades passed. No one knows where it is. It was probably destroyed along with the Southern Pacific freight offices in 1906, leaving a typewritten copy of the original deed** to be offered as evidence of ownership in 1994. The typewritten copy was turned down by Judge Hanlon, who found it was “without proper foundation”.

This could be said of every piece of property in San Francisco. The unceded Ramaytush Ohlone land in San Francisco has passed through the prism of settler violence and speculation, leaving contended property titles as artifactual evidence, much like the right-of-way itself functions as a historic remnant of California’s railroads. Historian R. A. Burchell notes in his book The San Francisco Irish: 1848-1880 that San Francisco’s claim to possess title to 17,754.36 acres, which was first pursued by the city in 1852, wasn’t fully recognized until 1884.

The period of contention between the old Californios trying to prove ownership with their surreally distorted diseño maps and speculators, like Center and his buddy Samuel Crim, another Mission District land baron, form a specific chapter in the Mission District’s history, one in which unquiet titles begat unquiet social conditions, like the Mission Dolores Squatter Riot that took place on the night of October 9, 1867.

The riot was an armed grudge match between Center, Crim, and Supervisor James H. Reynolds, all of whom claimed title to the same parcel on Howard (South Van Ness) between 22nd and 23rd street. On the night of the riot, Center and Crim led 70 men brandishing guns and bayonets through the Mission to rip down Reynold’s holding and other “shanties” in the neighborhood. The Reynolds faction, threatened at gunpoint, shot first. Fire was returned, wounding three men and killing a fourth, an Irishman from County Meath named Peter Bradley, who was with the Center-Crim gang. In the aftermath, Reynolds, Center and Crim were arrested and charged with assault with the intent to murder. 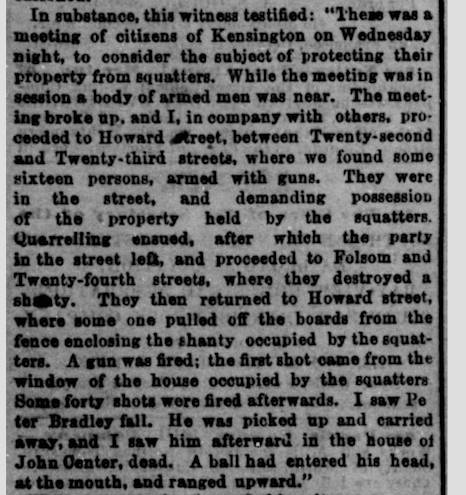 In any case, the settling of the Mission continues. In the last year, the Assessor-Recorder’s office has divided the right-of-way into three parcels, for reasons they prefer not to discuss, citing California revenue and tax code section 408. The Assessor’s office did confirm in an email to Mission residents that they’re seeking taxes from dead people and defunct family trusts associated with these three parcels.

The John Center Company, which was dissolved in the mid 20th century, is on the hook for $211,653. William Henry Crim III, a descendant of Samuel Crim, and who might be dead, is being billed $61,514. Celia Wehr, a woman who lived next to the right of way in 1910, and who is certainly dead, has been billed $9,676. (That the deceased are being taxed by the assessor’s office adds a surprising twist to the adage that death and taxes are inevitable.)

So now what? If no taxes are paid within the next four years, and the land is declared abandoned, the parcel will revert to the city, who will then have the choice to auction it, or keep it unowned, with protection against profit, and develop it as open green space, sort of like it was a long time ago, before missions, ranchos and land speculators began to purchase the place now called San Francisco.

The destruction of the original title, which was accidental, now seems determinative. Prior to any official decision making, this parcel has managed to revert back to its natural state of being un-owned, which is to say un-sequestered by deed for future profit. It feels misguided to investigate missing titles on unceded territory when the deeper identity of this place— land used for a common purpose—seems so determined to assert itself. Land has spirit, too, quiet but persistent. 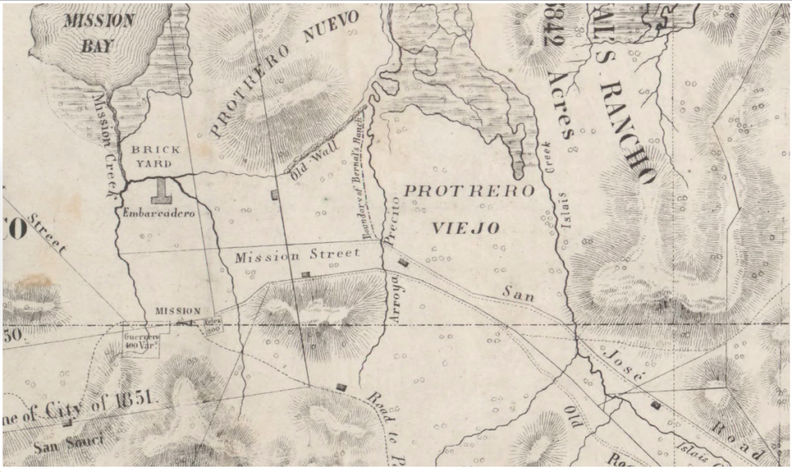 Map of the Mission District “Pueblo Lands” circa 1865. Please note the Embarcadero, or pier at the mouth of Mission Creek, close to the modern day intersection of um…Harrison and 17th? If you know for certain, tell me.