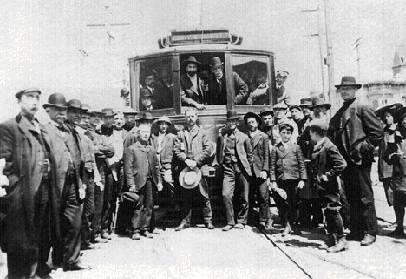 In this photo, Mayor Schmitz conducts the first streetcar ride after the 1906 earthquake. The Carmen (pictured) were among the most militant of San Francisco workers as they struck in five of the six years from 1902 to 1907, leading to the violent gunfight that erupted on Bloody Tuesday, May 7, 1907. Ten years later, carmen staged a wildcat strike for an 8 hour day and against the brutality of United Railroads.

When eastern investors, led by Patrick Calhoun (grandson of the former U.S. Vice President who had resigned to lead the South), took over the jumble of San Francisco streetcar lines in 1901, they inherited a system that had 234 miles of track, 56 miles of cable, 166 miles of overhead trolley, four miles for horse cars, and eight miles of ancient steam railroad. Each of these four methods had a different gauge of track, and the rolling stock consisted of 376 cable cars, 414 trolleys, 65 steam dummy cars and ten horse cars. About half of the lines had been converted to overhead trolleys by 1900, but there was strong sentiment in SF against overhead lines and in favor of placing them in underground conduits, which would cost a lot more.

In 1902, United Railroads began making regular, secret payments to Abe Ruef as a special consulting attorney. These payments were made by Tirey L. Ford, who at the time was also the Attorney General of the State of California, a position he continued to hold for several more years while he was also general counsel to URR.

By the time of the 1905 election victory, URR was embroiled in a bitter fight with Rudolph Spreckels and James Phelan over the issue of overhead trolley lines along Sutter Street, where both men owned property. URR's Calhoun made attempts to buy their support with promises of support for more parks and improvements along Golden Gate Park's Panhandle, where ex-Mayor Phelan owned significant property, but both men continued to oppose the overhead trolley plan and insist on more expensive underground conduits.

URR increased the monthly payments to Ruef from $500 to $1000. After a series of meetings in which Ruef proposed that URR should pay for ornamental street poles and the electric lights along the routes they wanted to run their trolley lines, an agreement was struck between Ford and Ruef by which URR would pay for ornamental poles along Market and Sutter to Valencia and Van Ness respectively, but not the lights or power. Ford then offered Ruef an additional fee of $50,000, which Ruef refused, negotiating instead for what was ultimately agreed to be a fee of $200,000 when the work was completed (i.e. the vote of the Supervisors).

The Spreckels, Rudolph and father Claus, filed incorporation papers for the Municipal Street Railways of San Francisco on April 17, 1906, in order to prove that underground conduits were economical and superior, and to bring pressure to bear on Calhoun to give up his resistance to undergrounding the electrical lines.