Historical Essay
by Josh Hardman, 2016
Part 2 of 6 in A History of Repression at UC Berkeley. 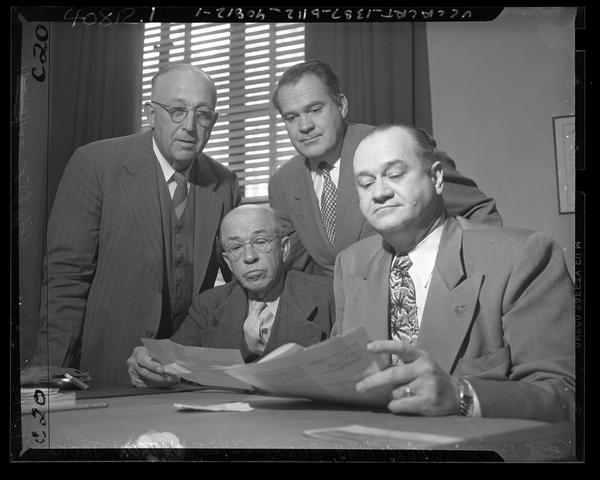 The context of a right wing, reactionary administration was fertile ground for the anti-communist hysteria that swept the nation in the McCarthy era. In early 1949 Harold Laski, a prominent left-wing member of the British Labour Party, had his speaking engagements at UCLA and Berkeley cancelled [1], illustrating the level of paranoia and contempt for those perceived by the administration as Communist sympathisers. In this Cold War climate, far-right regents such as John Francis Neylan were able to exercise great agency over the University’s response to McCarthyism, which culminated in the introduction of what has been dubbed the ‘Loyalty Oath’ in 1949.

The Oath was imposed by the Board of Regents, and required all University employees to pledge their loyalty to the state constitution, and to deny membership in, or belief in, organisations promoting the overthrow of the US government: the clear emphasis being on Communist organisations. Sproul pushed for the Loyalty Oath at Berkeley, which was pre-emptive as the Oath for state employees [2] did not extend to employees of the University of California at the time. Chairman of the California Committee on Un-American Activities (the California State Assembly’s ‘little HUAC’) Jack B. Tenney supposedly threatened to withhold the university’s budget if it did not “deal with its communist problem”, which perhaps explains what Professor Benjamin Lehman described as a “momentary failure of insight” [3] by Sproul.

The Oath was met with resistance by some faculty members, with non-signers at Berkeley organising under the leadership of Professors Edward Tolman and Frank Newman in the first half of 1950 [4]. Following a series of standoffs, deadline deferrals, and an ultimatum, a compromise gave non-signers the option of a hearing in front of the Privilege and Tenure Committee to defend their employment. On June 23rd 1950, the Board of Regents voted to fire 157 employees, both academic and non-academic, for their refusal to sign the Oath. This number was soon reduced to 31, as many decided to sign the Oath after the Regents made their tenacity clear, and others were spared by the subsequent actions of individual Regents. Charles Muscatine was one of these thirty-one professors, and in a later interview cited violations of the US constitution and threats to academic freedom as his motivations for refusing to honour the Oath [5]. Other members of staff and faculty resigned in protest of the mass-firings, such as Wolfgang Panofsky; a physics professor and researcher at Ernest Lawrence’s Radiation Laboratory. Lawrence, annoyed at the prospect of losing a promising young scientist such as Panofsky, demonstrated just how out-of-touch many University officials were throughout the controversy by inviting the physicist to an “out of channels” [6] meeting at Regent Neylan’s home. As Birge writes: “if there was anyone at the time for whom Panofsky felt utter disdain it was Neylan” [7], for Neylan was the orchestrator of the Oath, and a supporter of the far-right faction of the Republican Party. 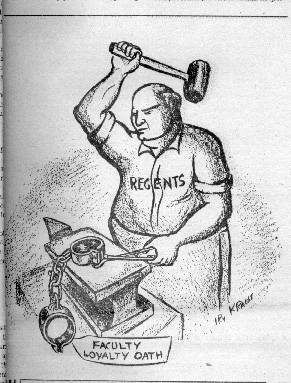 In a landmark victory in April 1951 at the California Court of Appeal [8], the University was ordered to reinstate the academics fired for their refusal to sign, and it was made clear that employees of the University could not be subjected to any narrower oath than that set out by the statewide Levering Act. Thus, the dismissals were reversed, and a number of lawsuits for back pay were lodged; but the damage was done. It was supposedly Tenney’s threats of defunding the university that led Sproul to allow the Oath to pass [9]; a measure that surpassed the anti-communist measures being voted down in the legislature. Nonetheless, the Loyalty Oath was evidently the brainchild of staunchly anti-communist, right wing members of the Board of Regents and administration; which called into question the university’s commitment to academic freedom, exemplified their lack of empathy for staff’s ethical concerns, and provided grievances that contributed to the eruption of the Free Speech Movement a decade later.