Til the Mule Came Home: San Francisco’s Own Mule Arizona 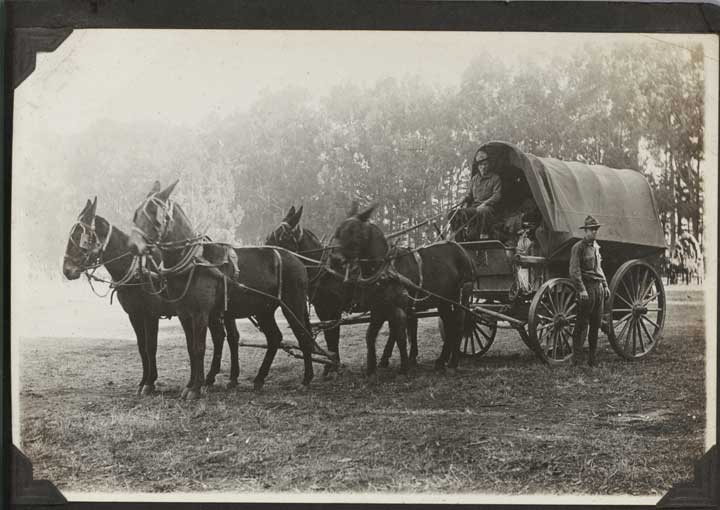 Photo: courtesy of The Bancroft Library, University of California, Berkeley

During World War I, the Presidio of San Francisco was a major U.S. military base. Over 2,000 personnel were stationed there, and the army and infantry patrolled the grassy fields and brick barracks of the Main Post. Laura Ingalls Wilder visited the Presidio in 1915. She was in awe of the beauty of the military post where she watched the soldiers busy about their tasks, riding horses and mules that looked “fat and well cared for.” But as tensions abroad escalated during the Great War, the Presidio’s landscape and occupants began to change. Select infantries were sent to Europe to join the Allied cause. After the war, the soldiers would return with something unexpected—a living, breathing mascot, a mule named Arizona (though he hailed from the state of Missouri).

In World War I, animals toiled alongside humans in the trenches. Mules and horses were essential for transporting ammunition, foodstuffs, and soldiers. In the first year the U.S. entered the war, approximately 12,300 mules were shipped from the U.S. to France, and shortly after another 16,500 mules were shipped to Europe. In total, over 67,000 animals were procured from the United States for the American Expeditionary Force (AEF) that would fight the final battles of WWI. 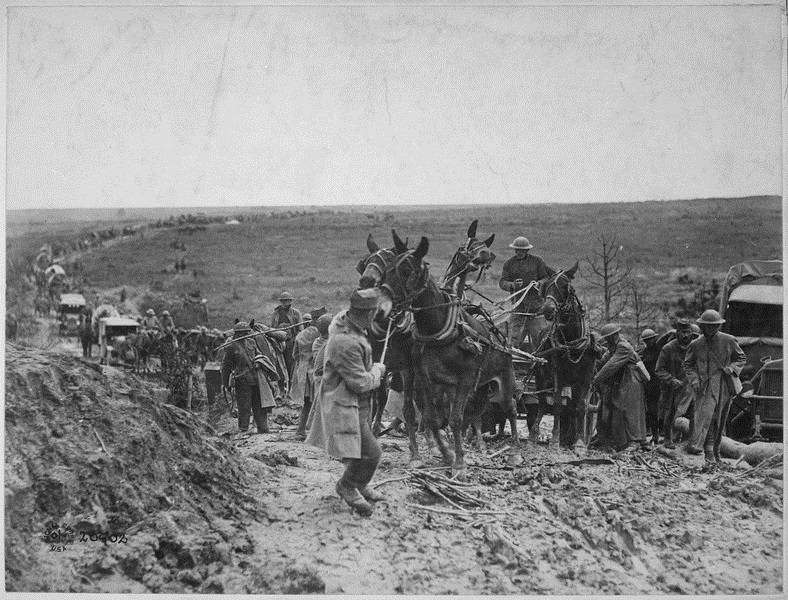 In the spring of 1918, the Presidio’s 30th Infantry was deployed as part of the 3rd Infantry Division, where they primarily fought in France, serving in the renowned Meuse-Argonne Offensive. In their battle-days diaries, American soldiers described waking to the stench of rotting bodies, stumbling on animal carcasses, and watching the ground split and trees shatter. Corporal Clarence Mahan described the need to cultivate a “numbness and…unfeeling attitude” in order to retain sanity and continue the fight. The massive offensive was fought through the Argonne Forest and along the Meuse river between September 26 and November 11, 1918, when the armistice was finally signed to end WWI. The allied forces were victorious against the German opposition, but the victory was costly. The weeks of heavy fighting left 26,277 American soldiers dead and 95,786 wounded, amounting to nearly half of the total American casualties of WWI.

Along with the men of 30th infantry, a mule named Arizona fought on the frontlines in the Meuse-Argonne offensive. Like most animals, he worked long days without ever being unharnessed, or catching a break to eat a few bites of grain. When grain was sparse, the mules were fed sawdust.

Arizona followed orders. But in the midst of battle, when he was dragging a field gun into position, something stopped him. Arizona had been hit: struck in the neck by a piece of flying shrapnel. Blue Cross workers rushed to his side to see what they could do.

Around 20% of the mules and horses brought from the U.S. were lost on enemy soil in WWI. Of the animal survivors after the war’s end, nearly all were condemned and sold to the French government, in private auctions, or to French butchers. The transportation back to the U.S. was considered an unnecessary expense. Only a few of the best mules and horses were selected to return to the U.S. Often these animals were the generals’ prized mules or had served as army mascots to boost morale.

Somehow, Arizona survived the blow in Argonne, and returned to San Francisco’s Presidio, where he was fed, loved, and eventually, decorated. Years after being wounded by enemy fire, Arizona was awarded a medal of honor on February 16, 1928 in an elaborate ceremony at the Presidio. Arizona stood beside General Frank C. Bolles, the colonel who commanded the 30th Infantry and the Presidio of San Francisco. The 30th Infantry had been stationed in San Francisco since the cessation of WWI, earning its nickname the ‘Friscans. And Arizona was a ‘Friscan, too. His celebration was attended by a host of news outlets, and even a blond movie actress who listened with “rapt attention to the tales of his deeds.”

Arizona was decorated with an army blanket with a stitched letter A to honor Arizona, the battle of Argonne, and the army at large. As The San Francisco Chronicle reported, “all Arizona has to do now is wear his army blanket with three service chevrons on one side and one wound stripe on the other, and eat corn.” His fellow soldiers saluted, as Arizona smiled along, munching his dinner.

This fall will mark the 100th anniversary of the American victory against the German opposition in the battle of the Argonne Forest. In his seminal work on the Meuse-Argonne offensive, historian Edward G. Lingel calls the offensive the “most critical military contribution of the Allied cause to World War I.” As for our friend Arizona, although battle was only a page in his world-travels, he stood as an emblem of those—mule and man—who never returned from the war. He also represented those who came home quieter, distant. The divide between the civilians and soldiers deepened as soldiers struggled to give language to the extremity of war times. Though Arizona didn’t say much, he chewed loudly, and stayed loyal to his infantry.

90 years after Arizona’s decoration, the Presidio is no longer a major military base, but a sprawling National Park populated with diverse wildlife, residential homes, and flourishing cultural institutions. Yet, the park still retains the shape of Wilder’s image: a gorgeous terrain housing visitors, workers, and volunteers dedicated to preserving the land and its rich history. Arizona’s spirit, still draped in his sparkling A, continues to thrive in the Presidio’s dedication to honoring its military history.

Throughout his life, Arizona trotted from a small Missouri farm through the treachery of Argonne, to the land of fresh corn, open fields, fellow soldiers and locals: the Presidio of San Francisco, home.