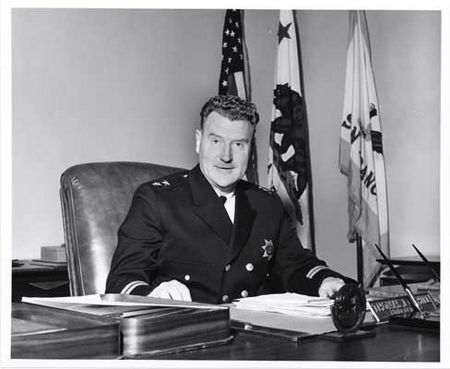 Police Chief Thomas Cahill, n.d.; Photo: San Francisco History Center, SF Public Library
Thomas J. Cahill was born on June 8, 1910 on the North Side of Chicago, but spent his childhood in County Kilkenny, Ireland after his father abruptly relocated the family back to his country of origin. He excelled in Ireland, mastering Gaelic in school, but always desired to return to America, especially because of a strained relationship with his father and his mother’s death at age sixteen. When he was nineteen years old, months before he would lose his American citizenship, Tom’s cousin visiting from the United States pleaded, “Tommy, you’re not gonna make it here, you have to get the hell out of Ireland. Come to America, and I’ll give you a job down in Fresno, and we’ll go from there.” Cahill arrived at Ellis Island on the twenty second of February 1930, and began working on his cousin’s 4000 acre cotton and grain ranch in Fresno, California soon after. Tom, along with another Irishmen, knew that America had much more to offer than Fresno, so they found themselves at the ranch’s front gate flipping a coin to decide their destiny. “Heads went north, tails went south. They said, look, two Irish guys in the heart of the depression aren’t going to make it, but one might have a chance.” If the luck of the Irish is real, Thomas Cahill most certainly had it. While in a diner discussing his journey to San Francisco, a fellow Irishmen, who knew the head of the Department of public works there, offered Tom a letter of introduction that led to his first job in San Francisco.

Cahill spent his first ten years in San Francisco delivering 300-pound blocks of ice around the city and steadily settling himself into the Irish community. When Cahill began noticing the appearance of the electric icebox in the early 1940s, he knew he would soon be out of work. Another ice deliveryman convinced him to take to police exam with him. Although his friend failed, Cahill passed and thus began his tenure at the San Francisco Police Department in the summer of 1942.

Cahill was like any other “beat cop” for four years, but encountered his big break when Frank Ahern, a nationally known homicide detective, requested Tom as his partner. It was an unprecedented move given Cahill’s lack of experience. When asked about Cahill, Ahern admitted, “I don’t know him at all. All I know is that I like the way he operates and want him as a partner.” Ahern noticed the same qualities as his Cahill’s son John, “I never saw my father in stress or react emotionally to anything… [and most of all] he was a man with true integrity, what you saw is what you got.” Ahern and Cahill worked together from 1946 to 1956, becoming nationally known as honest detectives and experts on the Mafia. Ahern was appointed chief of police in 1956 by new Mayor George Christopher and unsurprisingly named Cahill as his deputy chief of police. Cahill’s “civil service ranking was that of a patrolmen… and that was just unheard of.” When his son, John, asked him why he never took any of the exams and worked his way up through the department, he responded in a classic Cahill manner, “I was too busy doing police work, that was my job.” Following Ahern’s sudden death in 1958, Thomas Cahill, an Irish immigrant with fourteen years police experience, found himself at the helm of the San Francisco Police Department. 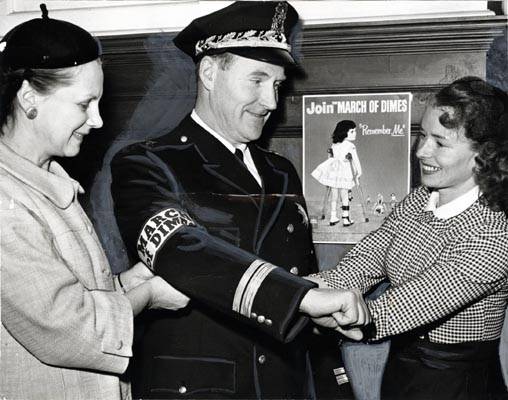 “The chief, a big, thin lipped man with a crown of closely cropped red curls, was known as a tough but fair cop.” Cahill was chief of police during San Francisco’s most tumultuous time, as the hippie movement, civil rights movement, the Cold War, and the Vietnam War all occurred during his twelve-year tenure. His son John remembers simply accepting that his father was going to work 24/7 as chief of police. “He would have a drink with my mom, they would talk in the kitchen, then he would go shave, and put on a clean white shirt and tie. He’d have dinner with us, and about seven o’clock his driver would take him to whatever meeting and whatnot. He wouldn’t be back till ten or eleven at night, and that was pretty consistent.” While serving as chief, Cahill established the first tactical crime prevention squad, the first community relations office, the canine unit, and the police cadet program. John Cahill recalled that, “he told every graduating cadet class that if they did good police work, and were honest policemen, he had their back. But if they crossed the line, and became dishonest, then he said, 'I will be the one who escorts you to San Quentin, and I will be the one who closes the door on you. And that is a guarantee.'”

Cahill was about as traditional as they come, and thus naturally clashed with many San Francisco residents. There were a number of demonstrations and riots, including those at Hunter’s Point, San Francisco State, and the HUAC hearings, that Cahill responded to with an iron fist. He had no patience for public disorder, and exclaimed that “law, order, and health regulations must prevail.” 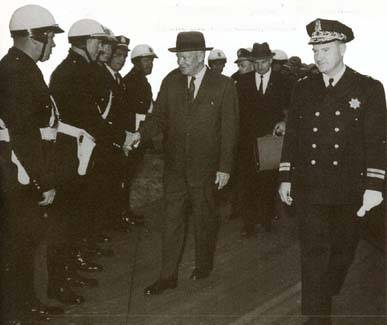 Although it is easy to attack Cahill for some of his reasoning and actions today, one must consider the unprecedented time period Chief Cahill served under. In Cahill’s mind, he was saving the city, and individuals within it, from degradation into anarchy. Although many San Franciscans likely resented his policing style, people such as President Lyndon Johnson and FBI Director J. Edgar Hoover celebrated him. He served on the Commission of Law Enforcement and Administration from 1965 to 1967, was president of the International Association of Chiefs of Police in 1968, and just nearly missed being appointed as FBI Director following Hoover. Despite his success locally and nationally, a disagreement in 1970 with then-mayor Joseph Alioto led to his forced retirement.

Following his departure from the San Francisco Police Department, Cahill worked as Chief Investigator for the Pacific Bell Telephone and Telegraph Company until he reached the mandatory retirement age in 1975. He spent much of his remaining twenty-seven years at his vacation home in Clearlake, California, but never lost his passion for police work or San Francisco. One of his proudest moments was in 1997 when the city of San Francisco honored Cahill by naming the Hall of Justice after him. He beamed with joy, standing in his police uniform with as much vigor and pride as thirty years prior. On October 12, 2002, at the age of ninety-two, Cahill passed away from heart failure.

A story told by his son John represents him perfectly: “We were walking to John’s Grill one night and [my dad] introduced me to this guy who was coming up Powell Street against us... [The man] he turned around and said to me, ‘You know, you got quite the father. This son of a bitch fired me. He told me, if I did this, and I crossed the line, he was going to fire me. I didn’t believe him. I did it, I crossed the line, and the son of a bitch fired me. But I really respect him.’ And he walked off.” That was Thomas J. Cahill.