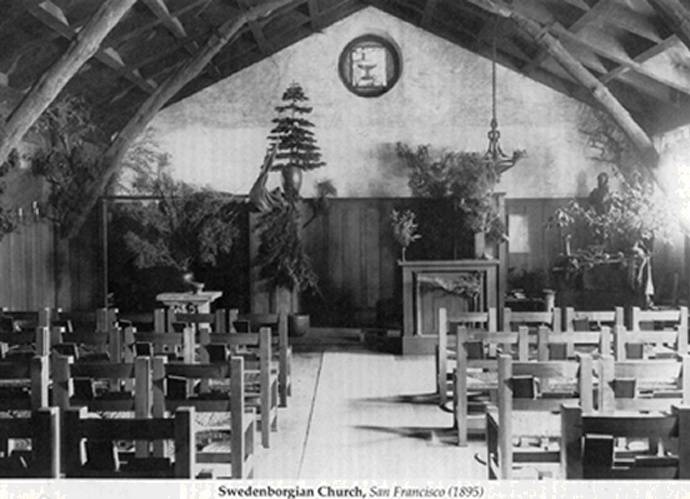 Interior of the Swedenborg Church.

The beginnings of this historic church go back to the arrival in the Port of SF of Rev. Joseph Worcester, some time in 1867. Worcester came from a long line of distinguished New Englanders of Boston, MA, where his father, the Rev. Thomas Worcester, had founded the New Jerusalem Church.

He gathered a small congregation around him, which worshipped with him quietly in Druids Hall, on Sutter Street, downtown.

In 1894 the lot for this church was purchased, and on August 20 the building contract with Mr. Gallagher was signed.

Tinkling bells awoke the neighborhood on September 20, 1894, when two horse-drawn farm wagon appeared on Lyon Street loaded high with hay, in which were concealed the famous Madrone trees (from the Santa Cruz Mountain farm, "Glen Ranch") which now support the roof of the sanctuary.

Mr. Bruce Porter, a distinguished San Francisco artist, had furnished sketches from an Italian village church near Verona, in the Po Valley, for the exterior of the church.

On the level ground towards the north was built a rectangular, wide nave. Mr. Bruce Porter made two windows, a circular one for the East wall, showing a dove resting on a bird fountain, shade by apple blossoms. The other on the south wall in a large wooden frame that can be swung out into the church, depicts St. Christopher carrying the Christ Child through the angry river. Mr. Porter also secured a piece, or pieces of medieval glass from Westminster Abbey in London which was placed in a specially constructed narrow slit under the tower.

The architectural drawings were made in the office of A. Page Brown, designer of San Francisco's world-famous Ferry Building. Mr. B. Maybeck, later also to become a well-known architect, was the draughtsman. His drawing of the compound can still be seen in the library. Mr. William Keith, most intimate friend of Joseph Worcester, gave generously. His four great paintings on the north wall are the delight of all visitors. Farthest west is the dark oak grove reminiscent of Keith's great religious painting "Gethsemane." Then follows a Peninsula scene in the showery days of March. The third shows hay being shucked on a wagon. The last painting, after seed time and harvest, returns to the beginning, the ploughing for a new cycle of seed and fruit.

There are other Keith memorials in the church. One is a floor bell, of which he had several in his studio and which he rang to hear the celestial overtones of life, transmitting it into the life of color and line. There is a sketch of Mr. Worcester's cottage on the slopes of Piedmont, delineating in the distance Mt. Tamalpais, over the Bay.

There is a great fireplace at the west end of the church that contributes so much to the warm atmosphere, literally as well as figuratively speaking. In it was once a coil from which hot water was piped to the front of the church, where a radiator was placed. Later additions to the church include a communion altar of renaissance style and the bronze copy of the medieval Praying Madonna of Nuremberg, originally cast by Peter Vischer.

There are 80 hand-made, massive chairs, made of maple, without the use of nails. The seats are woven from tule rushes growing in the great delta of the Sacramento and San Joaquin Rivers.

-- Omar Tobisch, from his pamphlet, The Garden Church of San Francisco: A Description of its Symbolisms, Art Treasures, and excerpts from Historical Documents. 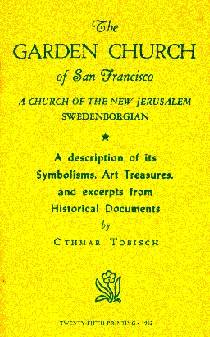