The Short, Contentious History of the Gurney Cab Company in San Francisco 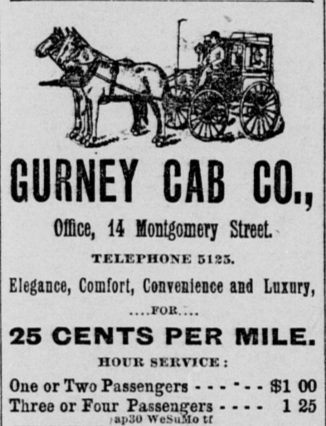 An advertisement for the Gurney Cab Company from May 1, 1890.
Ironically, the stock image of a cab looks nothing like the one-horse, two-wheeled Gurney model.
Image: San Francisco Morning Call

From the Daily Alta California, May 1, 1890:
The principal office of the Gurney Cab Company is located at 14 Montgomery Street. The company will initiate its operations with twelve cabs, which number will be increased as fast as required. The cabs will commence running at 9 o’clock this (Thursday) morning. They will start in a body from the main office, headed by a splendid band of music, parade through the principal streets of the city and show the inhabitants of San Francisco not only the force but the beauty of the new arrangement, yielding comfort, convenience and dispatch in all its ramifications of public service. The company has thus far established its cab system in eighteen cities of the State, and in every case earned unqualified and well-deserved success. The fares will be much lower than those heretofore ruling, and the management engages to give patrons prompt and satisfactory service in all and every case.

Thus was heralded the arrival in San Francisco of the Gurney Cab Company, a modern form of conveyance for the 1890s. In the 19th Century, the horse-drawn ancestors of the taxicab came in two kinds: large, slow hackney carriages (or “hacks” for short) drawn by two horses, and lighter, faster cabriolets (or “cabs”) drawn by one horse. While larger cities like London were already known for their omnipresent hansom cabs, San Francisco was still dominated by the slower, multipurpose hacks. Hacks could carry loads of tourists and their baggage from the wharf to the city’s hotels; they were hired to carry mourners out to the cemeteries in Colma. The demand for the smaller, cheaper cabs was only just growing as the business district expanded and residential suburbs grew in the Mission, Western Addition, and Richmond districts. For licensing purposes both kinds of vehicles were termed “hackney coaches” and their drivers “hackdrivers” or “hackmen.”

The Gurney cab was named after its inventor, Theodore Gurney of Boston. With two wheels, it was lighter and more comfortable than the clunky four-wheeled cabs that the West had known hitherto. Unlike hacks and other cabs, which passengers had to clamber up into, the Gurney featured a low-slung, easy entrance through the back. Gurney had only limited success introducing his new cab model on the East coast, but found greater success in the West, introducing Gurney Cab franchises in Salt Lake City, Los Angeles, Oakland, Seattle, and a number of other Western cities.

In 1890, the Gurney cab came to San Francisco, and immediately encountered opposition

To understand why, we have to step back a year to 1889, when a businessman disembarking from the ferries at the wharf was picked up by a hackdriver named James “Nosey” Brown. Nosey, it appears, was not a licensed hackman. He was instead what the papers called a “nighthawk,” a “scalper,” or a “jay-hawker” – an unlicensed hackman plying for hire in a carriage which he had either rented from a licensed hackman during off hours, or from a livery stable where carriages were kept for rental to the public. Usually working under cover of darkness to avoid police detection, these “scalpers” or “nighthawks” would offer to take passengers for the regular hack fare; but would often then take their passengers to an out-of-the-way place and insist on a much larger payment. This is what Nosey Brown did to his passenger, a certain F.S. Chadbourne. Chadbourne refused to pay, and Nosey kicked him out of the cab in the middle of nowhere.

Unfortunately for Nosey, Chadbourne was perhaps the worst possible person to play such a trick on. Not only was Chadbourne a prominent San Francisco businessman, who knew precisely what a cab was supposed to cost; he also happened to be the foreman of the newly impaneled civil Grand Jury for the County of San Francisco. Under Chadbourne’s direction, the Grand Jury drew up new, strict regulations for the city’s cab industry, requiring all hackdrivers and vehicles to be licensed, with one driver per vehicle; and requiring the numbers on hackdrivers’ badges to match the numbers on their vehicles, so that no substitutions were possible. By most accounts, the Chadbourne Ordinance, as it came to be called, was successful in swiftly curtailing the crowd of night-time scalpers who had been lingering around the wharf and train depot, or trawling through the dark streets at night, looking for easy prey.

As the Call put it:


The crying nuisance that this law aimed to remedy, and in a wonderful measure has remedied, was the practice that irresponsible carriage-owners and carriage companies had of procuring blank licenses for a few drivers, not designating any particular carriage, and then putting on a carriage seat whenever there was need some person that was as likely to abuse his privilege as not, and oftener did than not. Besides, it allowed two or more drivers to run with one vehicle, by means of which every now and then some rascally trick was perpetrated on an innocent unsuspecting traveler. (San Francisco Morning Call, September 18, 1890)

To secure a license, a hackman had to convince the Police Commission that he was “a law-abiding citizen of good moral character.” Among the drivers who were never able to obtain a license was one “Nosey” Brown.

When Theodore Gurney brought his Gurney cabs to town he promptly ignored these regulations. He had developed a business model that worked in many cities and he was not about to change that to fit local regulations. To run his cabs at a price lower than the competition, Gurney needed to have each cab in operation as much of the day as possible, and for this he needed two drivers per vehicle. This drew the ire of the Carriage Drivers’ Protective Union, who were ardent supporters of the Chadbourne Ordinance. The Union represented independent owner-operators, who appreciated that the one-driver-one-vehicle rules put them on an even footing with the large carriage company fleets, of which Gurney Cab was, to them, simply the most recent example.

From the Daily Alta California, May 14, 1890:
The Carriage Drivers’ Protective Union held a sort of indignation meeting last evening. The hack and coupé drivers complain of what they consider to be discrimination against them. They state that the Gurney Cab Co. are allowed to take out two drivers’ licenses, so that each vehicle can be run night and day. The hack-drivers can only get one license. ... The Gurney hack people were roundly denounced, and the assertion was made that of the twenty-four Gurney drivers only nine have drivers’ licenses.

Gurney was in fact strongly against regulation and licensing in general. As a side line he leased refrigerator trucks to an unlicensed meat packing company, which were shut down by police for not having meat-truck licenses. Gurney argued that licensing was unconstitutional and a restraint on the free market, and vowed that he would take his case all the way to the Supreme Court.

From the San Francisco Morning Call, September 11, 1890:
Mr. Gurney has in fact made an open declaration of war, and says he will overturn the system of municipal licenses if he has to go clear through the United States Supreme Court. He believes the system is in violation of the Constitution of the United States, and has instructed his attorney, Alfred Clarke, to fight the whole thing to the bitter end.

Mr. Gurney is a very wealthy as well as a very stubborn man, and those who know him know better than to doubt his determination.

Despite Gurney’s stubbornness, his fight only went as far as the Circuit Court, which upheld the licensing laws.

Perhaps it was Gurney’s reputation as an advocate of the free market which got his cab company involved in another spot of trouble. In 1890 there was a major, popularly supported strike by the iron workers at the Fulton Iron Works at Howard and Beale. The employers shipped scab workers in from the East by train, and Gurney cabs were used to transport them to the Iron Works. This did not sit well with the striking picketers, who intercepted or chased down and even smashed up a few cabs. A cobblestone hurtled through the glass window of one Gurney, and the company manager placed that stone as a paperweight on his desk at the Gurney Cab offices, as a reminder not to send any more cabs across the picket line.

Gurney’s business model involved undercutting the competition on price, but his patented cabs were expensive. Each was built for a cost of $725 – no small sum in the 1890s – at a factory in Boston, and then shipped by sea to San Francisco. The Gurney Cab Company in San Francisco had trouble covering its costs, and a Call article insinuates that the company tried to make up the difference through overcharging and hidden fees.

In any event the Gurney Cab Company of San Francisco folded in early 1892, and the Call’s obituary was not kind:

No More Gurneys.
The Gurney cab system has broken down in this city and the franchise, together with the horses, harness and vehicles, will be put up at auction on Friday next. What at first promised to be a relief from the high prices of the regular hackman proved on trial to be a delusion and a snare. With that discovery the early patrons soon returned to their old drivers and left the Gurneys to practice their overcharges on unsuspecting strangers. (San Francisco Morning Call, February 18, 1892)

The property of the Gurney Company, along with eighteen cabs, was sold at auction on February 26, 1892, at a substantial loss, as the Call reports with a touch of Schadenfreude:


The cabs, horses, harness, and other equipments of the Gurney Cab Company, was auctioned off yesterday at the stables on Montgomery street. The bidding was at times quite lively, but as a whole only a seventh of the original cost prices were realized. Eighteen months ago the cabs cost $750. Yesterday they were knocked down for an average of $110. (San Francisco Morning Call, February 27, 1892)

The Gurney cab may have only lasted a short time in San Francisco, but it left a lasting and unexpected legacy. “Gurney” became a popular word and even started to be used as a synonym for “cab” as in, “Let’s take a gurney.” According to historian Peter Tamony, this usage spread to horse-drawn police wagons and municipal ambulances, which were just being adopted during the 1890s. Tamony suggests that Bay Area medical students started applying the name to hospital stretchers as well, and so the modern meaning of “gurney” was born, derived from the name of a short-lived and all but forgotten cab company.