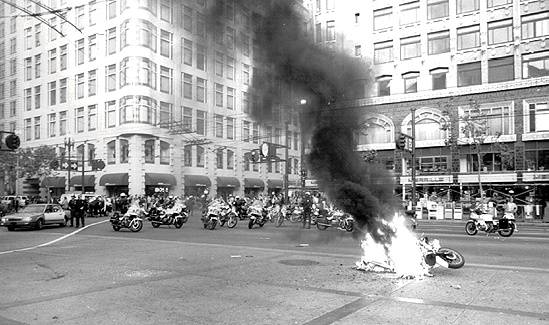 Burning of a police motercycle during the King Riots in 1992

Six of us wandered out of the Grant Building at 7th and Market at about 5 p.m. on April 30, 1992, to the state building on Van Ness and McAllister. A crowd of about 5,000 was gathered in the middle of Van Ness and all over the front of the building, with someone already droning on a loudspeaker (always a bad sign). Immediately we were joined by a 2,000-strong contingent marching in from the Mission, and another large group from the Haight and the Western Addition. By now the crowd was full of white lefty-anarcho-punkoid-hippies, various office workers, and a huge number of young Latino and black men. People weren't pissed off in a real immediate way, there was more of a party atmosphere in the street and most of us in the crowd were feeling quite friendly toward each other. There were about 100+ young anarcho-autonomists with masks and various 2x4s and other weapons appearing under jackets and arms--clearly ready to start the riot at the first opportunity.

Luckily, the crowd soon surged down McAllister, past City Hall and the library, all the way down to 7th and Market. I didn't notice at the time, but all the cars along McAllister where we were walking got trashed--a sign of things to come. At 7th and Market part of the crowd went south on 7th while the majority turned east on Market. The police attacked the people on 7th street and declared the area a riot zone. Windows on the Jack in the Box and Merrill's were shattered. Our friend said he had just barely escaped a clubbing from the police amidst all the broken windows along McAllister. The crowd turned up Leavenworth, we emerged from a brief break in our building and found ourselves way behind them just 10 minutes later. By then the cops had sealed off the Market/7th area and we were walking eastward as if in the eye of a storm. We saw the crowd heading up Nob Hill toward the Fairmont and the summit, but many cops between us and them. We circled toward downtown to try and get in front and join up . . . along the way we saw dozens of police vehicles and major maneuvers of troops going on all around us. A squad car sped by with the back door hanging open with a cop's billy club hanging out. We found the jewelry store near 6th Street totally trashed and looted. We finally made it up to just behind the main crowd which had just passed the top of Nob Hill. The rich were looking quite uncomfortable waiting for taxis at the Fairmont, while 40 yards away at the intersection of Sacramento and Mason a white stretch limousine was crippled with broken windows and sunroof and covered with spraypaint. By now there were at least three different groups wandering the streets of Nob Hill, each consisting of at least 1000 people. We loitered in the intersection of California and Taylor as the crowd approached from the north. 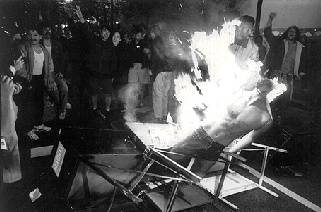 Street Scene during the 1992 King Riots

Friends on bicycles came up first and we exchanged reports, including the call we'd just heard go out among the cops to "get in front of them!" People's street skills have improved over the past decade: random creative wandering with bicycle scouts kept the cops confused and scrambling. A fat white guy with a huge board in his hands and no shirt was posturing militantly in the middle of the intersection--no cops in sight at the moment. The cops were frantic but couldn't stop it because people were wandering in a highly unpredictable route and moving pretty fast.

We wandered around, playing tag with the police, who kept roaring around on motorcycles trying to get in front of the groups. We managed to avoid encirclement, while anticipating it the whole time. After an hour of this we ended up near 3rd and Market and started back westward. At 4th and Market the Merrill's was surrounded by a short scaffold so we climbed up on that and watched for a while. "Habitat Leather" on Stockton was completely looted by about 20 different young black men and women. The looting was incredibly fast and well organized. It seemed there had been some planning before entering the zone. You had politicos wandering the hill breaking windows and trashing cars and garbage cans, keeping the cops pretty busy, and you had small groups of mostly blacks in cars pulling up at shops (they really went for the athletic shoe stores!), breaking the windows with huge planks, and grabbing everything in sight before getting away. Apparently a couple of these groups eventually hit an area near Fisherman's Wharf at Beach and Leavenworth later in the evening. A huge amount of merchandise was "liberated" that night--a zone without commodity relations, for a few hours anyway. I've never seen so much looting!

So we're standing on this scaffold and watching everything, a group of 1000 goes by toward a big line of cops, and suddenly from around 4th Street roars about 50 motorcycle cops, penning us in. We run around to the 4th Street side and got down from the scaffold and try to walk away, but they trapped us and started pushing us back toward the main crowd. Luckily I saw a gap between the cops and a Muni bus parked near the curb and walked out through it, twenty or so people following me, and we all got away - barely! Moments later a police motorcycle went up in flames in the nearby intersection and we saw an acquaintance get arrested for it when he went into the street to retrieve his bicycle.

We eventually made our way back to our office and called it a night. It went on for a few more hours, but it was a gradual tightening of the noose by the cops. The next night they pre-emptively declared a rally at 24th and Mission illegal (a 9 p.m. curfew!) and arrested about 500 people in the 3 blocks around 24th and Mission, including a bunch of friends and neighbors. But it was only a great riot, nothing more, nothing less. A bunch of people suffered temporary post-riot depression. It's really hard after that taste of wildness and freedom to see everyone (especially yourself) go back to work and "normal life." My expectations were wildly exceeded, so I wasn't surprised that it all disappeared relatively soon—it was really charged for maybe 24 hours, 30 at the most. 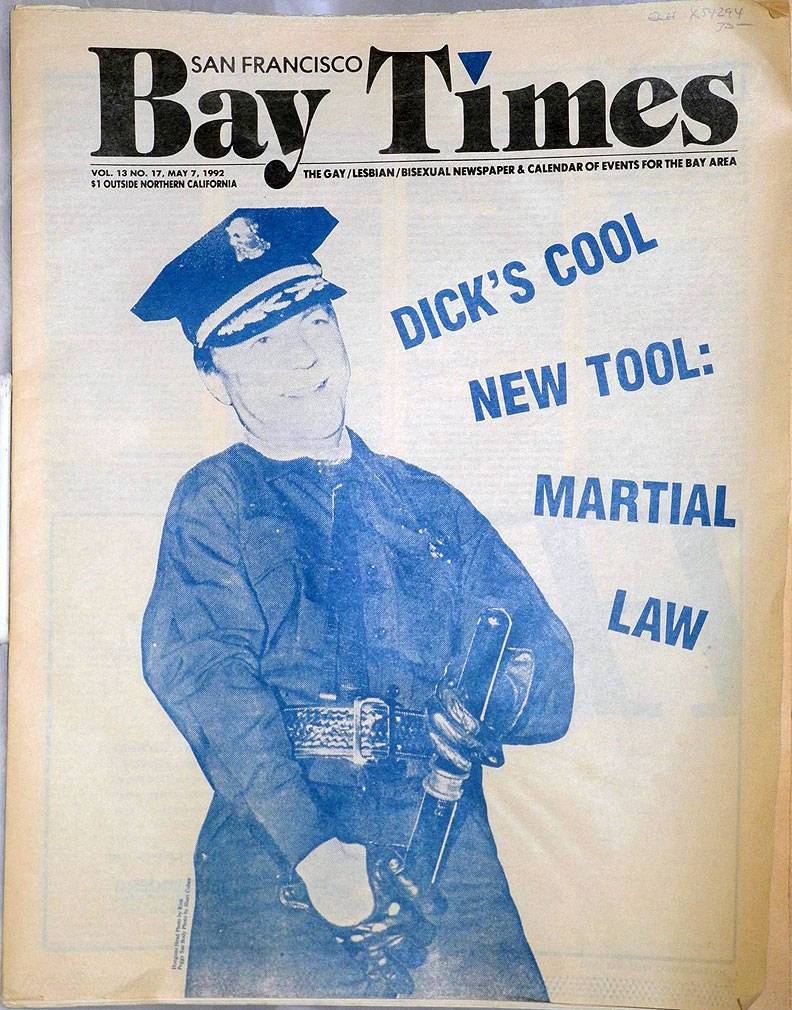 Sheriff Richard Hongisto is lampooned on the cover of the Bay Times May 7, 1992 issue, for his aggressive arresting of 2,000 protesters during the Rodney King verdict riot. Hongisto sent sheriff deputies out to seize the newspaper after it hit the streets, and was subsequently fired as sheriff only 44 days into his tenure. He and deputies were held liable in a 1994 civil suit jury verdict for violating the civil rights of the newspaper and were fined $5000.