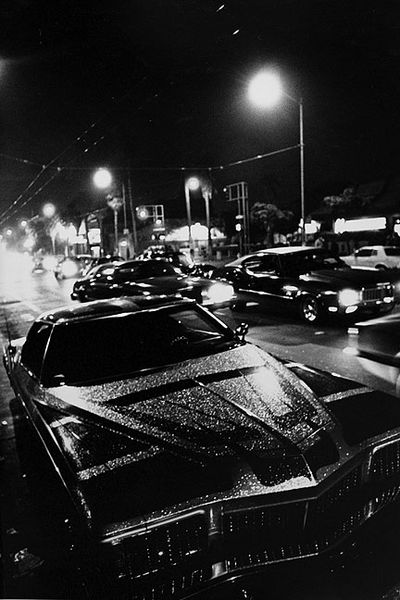 For most of my life I have lived in San Francisco, both in the Mission and outer Mission Districts. I grew up in the era of the “cholo low-rider” cars, political protests against U.S. intervention in Central America, and the football championships of the San Francisco Forty-Niners in the 1980s. San Francisco however, has a different historical narrative that mainstream San Franciscans are not aware of. Since it relates to gangs, it is dismissed or ignored.

Most San Franciscans are unaware of the decades-old gang culture that still exists today, nor do they know about the political nuances that everyday youth still experience to this day. As a young man of color, things in the neighborhood mostly seem normal and just how life is in the world. Looking back today, I can safely say that the world and things that I saw and experienced were quite unusual—and those in mainstream society would deem terrifying.

I grew up for some time in the Mission District on Lexington and Alabama streets where life was not particularly out of the ordinary, but as I grew older my family and I moved to the Excelsior neighborhood. I began formulating an opinion on how the world worked. I remember being placed in parochial school by my mother who wanted me to excel in school and eventually earn a better living than both her and my father. What was unexpected was the level of racism that existed at that time (mid-1970s). I was made fun of in school and chased by the Irish kids in my class for being different.

The weekends and summer vacations were my favorite times, for it allowed me to commute back into the Mission District where all my cousins still lived. I remember listening to the stories they use to tell about the goings-on in the “hood” and also learning the street politics that existed then. At that time the gangs that existed were neighborhood groups without any official names necessarily. I remember my older cousins recalling that there were gangs in the old days. There were some groups of older men that belonged, claiming streets such Folsom, Hampshire, Bryant, and Potrero, etc.

For my generation, there was one pivotal point however, where the mythology and romanticism of gangs was placed on wide screen in a theatre in a movie that debut in the summer of 1979 called “Boulevard Nights”. As I recall it was the Granada Theatre (which is now an Asian trinket market between 23rd and 22nd streets in San Francisco) where after the movie, all the young people who had been there began to take on another persona, including me. It was the first time that I saw people that looked and acted like me presented by Hollywood. Our ethnicity and at least some of our experiences at that moment were reaffirmed. Our identity as young thugs was acknowledged and seen by the world. We of course felt invisible. Society was watching what we were dealing with in our respective neighborhoods. Young people that had packed the theatre left shouting, “Folsom!” Others were yelling “Excelsior” mother f******s, while others yelled “SFM!” (San Francisco Mission) Putos! Some small pockets of young people started some skirmishes but nothing serious. All those young men and some women ranged between the ages of 12 to 18 or so it seemed. Soon after the movie I remember feeling in awe of the “pachuco”/“cholo” images that reflected my reality. I recall going home and getting my father’s size large white tee-shirts and my “Ben Davis” work pants and strutting around as though I had just adorned a uniform of honor and “respect.” This it seemed was to be our uniform for the next almost ten years, our expression of resistance to mainstream society or our way of being seen. 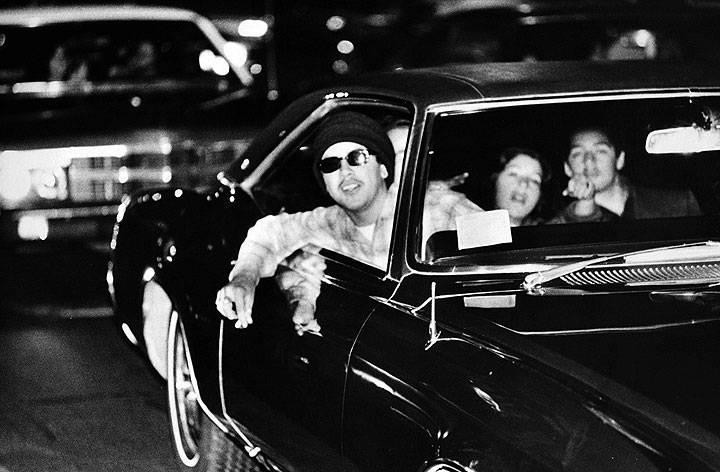 It is so interesting that from an indigenous perspective, it would appear that my ancestors back in Central America were doing the very same thing. Most of the colorful adorned Mayan and Nahuatl traditional garb worn today only started as the invisibility of the Indigenous communities grew.

Most cliques in those days were relatively unorganized but the movies and Hollywood kept producing the mythology. The influence of East L.A. low-riders moved north, and more mimicking was taking place. But it was also more than just pretending. Groups like the Lords of Frisco, Low Creations, and Estrellas car clubs also began exercising influence at the street thug level. As I recall many of the relatives from car clubs were either directly involved with street life or with emerging gangs throughout the San Francisco Bay Area.

The neighborhoods also began to formalize and those of us with bi-district or multi-district affiliations were looked down upon. Affiliations were always being tested by some of the older brothers in the “life”.

Alcohol, drugs and the influx of prison-gang-affiliated individuals being released from the penitentiaries and California Youth Authority was paramount to this gang lifestyle development in San Francisco. The struggle for the drug trade was mostly kept in the 16th Street and 14th Street corridors, along with the Tenderloin, Hunters Point, and the Fillmore. Chinatown was controlled by the Chinese families that helped establish that neighborhood.

As the romanticism of prison gangs—along with the tutelage of the older ex-cons—took hold of us twelve-year-olds, we began to understand the importance of territory and political affiliations with other groups. For the most part almost all the groups of young people affiliated themselves as SFM but had the flexibility of maintaining the autonomy of their particular street name. The Excelsior neighborhood was the exception. Most of the individuals from this neighborhood were to some degree more “Americanized” and although a working-class neighborhood, many did not speak any Spanish and felt a bit above those of us who were more affiliated with the Mission District.

During the low-rider scenes of the 1980s, the Mission District was comprised mostly of Mexican-American families with a growing influx of Nicaraguan and Salvadoran families. This was partially due to the Central American civil wars that were taking place. Friday and Saturday nights were jam-packed with low-rider cars at times bumper-to-bumper from Saint Mary’s Park to 14th Street and Mission. Clubs all the way from Fresno, San Jose, Stockton and Oakland were all on the boulevard showing off some of the most beautiful mosaic painted cars ever seen. Depictions of Aztec warriors and maidens, Mayan pyramids, scenes of Apache raids and cholo “pintos” (prison inmates) were common themes of the car murals. At 23rd and Mission there was a donut shop that closed shop at sundown but was a hub for many of my friends and relatives. At a minimum, there were close to 50 to 80 souls jam-packed into the doorway area of this store, all dressed in their black Sir Jack or Derby coats. I myself had both. Sometimes the low riders would cruise up and down 24th street and would end up in a place on Potrero and 25th streets known in the “hood” as the “lot.” It is now a beautiful park next to an elementary school, and frequented by the locals and at times, junkies. This infamous lot was the place where the good, the bad and the ugly took place. Fights, stabbings, loss of virginity, and many young people’s drug addiction started at this place. It was also a space however, where some of the street knowledge and political dynamics were heard and disseminated. Much of the neighborhood news became known at the “lot.” 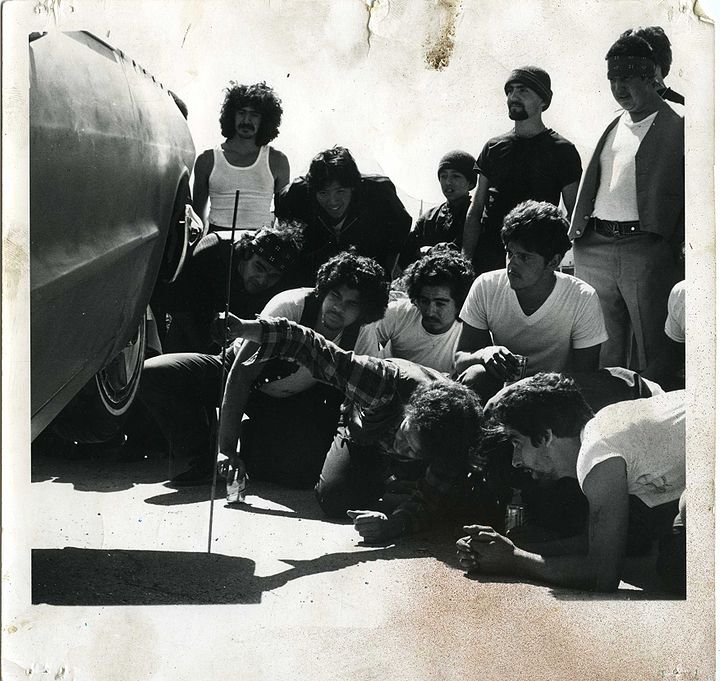 Checking the hydraulic lift at The Lot, c. late 1970s.

With more formalization of the neighborhoods came tighter and tighter boundaries. One thing was clear: Excelsior and the Mission were becoming more and more hostile to each other, partly due to the skirmishes during the cruise nights. This became more evident after several stabbings during the weekends. These stabbings turned into shoot-outs, and murders. Most interesting is the fact that at this time there was no rivalry between what Latino gangs now call “north” and “south”. There was no real penetration of this prison gang politique for the younger groups, to the extent that a shoot-out would take place due to a color (red for norteños and blue for sureños). Colors began taking hold after this era primarily around the early ’90s in both the Mission District and Tenderloin.

San Francisco in the prison gang realm is seen more as a neutral zone. In California, there is currently a war between members of the Mexican Mafia and the Nuestra Familia prison gangs. The Mexican Mafia was the first Mexican prison gang to start out of Folsom Prison in the 1950s and early ‘60s, made up mostly of Mexican prison inmates as a racial power group. Years later another group was founded by mostly Mexican farmworkers, who used the Cesar Chavez-led United Farm Workers union for their cover. They eventually became prison allies with the infamous Black Guerrilla Family, formed by George Jackson from Oakland, while the Mexican Mafia aligned themselves with Aryan Brotherhood. Many young gangsters living the “life” in San Francisco never realized that among them were members of the Mexican Mafia with their families living in the Mission, even though it’s in Northern California. According to some “pintos,” who would talk loud while on heroin, these “moscos” (flies) members however would have to pay rent to the Nuestra Familia members while they were staying locally.

The low-rider scene came to an end when a large police enforcement effort placed no left or right turn signs at nearly every intersection along Mission Street, and engaged in constant harassment of low riders. Many young people also began getting killed by other youngsters. Fourteen-year-old girls began getting pregnant and crime rates soared. Daly City aligned themselves with the Excelsior group and a war raged for about a decade. Fog Town and East Side Daly City were also players in the new alignment. Violence was steadily increasing and complaints by Latino residents also gave impetus to new police vigilance.

Since the mid-seventies, the gang situation in San Francisco has changed profoundly. Young men and boys and now young women are involved with murder and drug trafficking at a larger scale and affiliated not only with the prison gangs but now Mexican cartels. Dozens of young people have been slaughtered by other young people, disputing invisible boundaries.

Hope for this community began with a coordinated effort by community organizations such the Real Alternative Program giving young thugs opportunities for education and health. Unfortunately for some of these non-profits, they have been at odds with foundations, endowments and institutional racism. The threat to most of these Latino families is now gentrification and the selling of the affordable housing by private owners. Many of the families have now moved into suburban ghettos such as Antioch or Stockton where rents are cheaper. Now upscale coffee shops are often in close proximity to tortilla-making and Mexican bread markets. We will see what the future holds for the “Mission”. 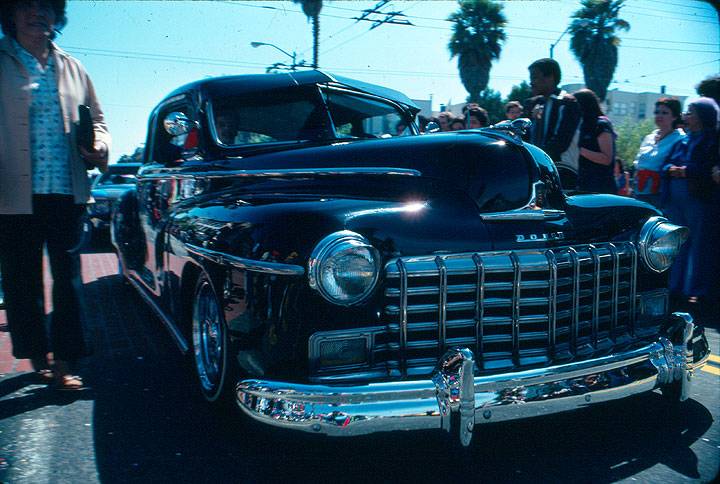