The May Day 1971 protests in San Francisco 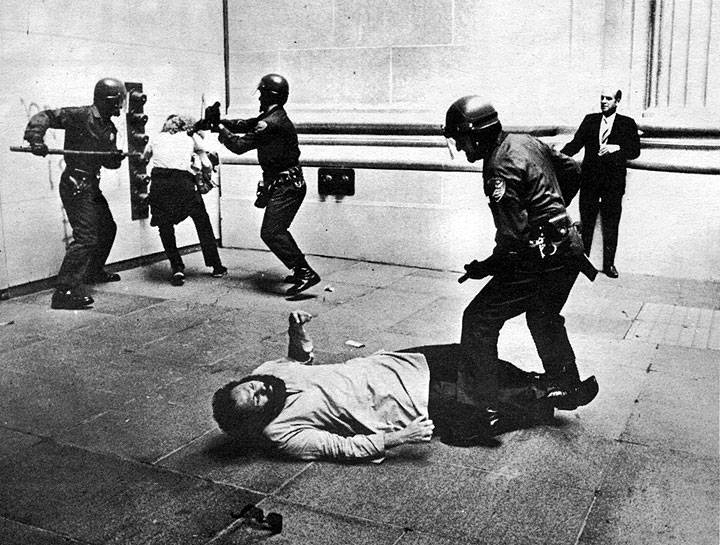 May Day 1971 -- SF police work over some demonstrators.

First-hand account over phone from downtown SF, broadcast originally on KPFA-FM, May 5, 1971. 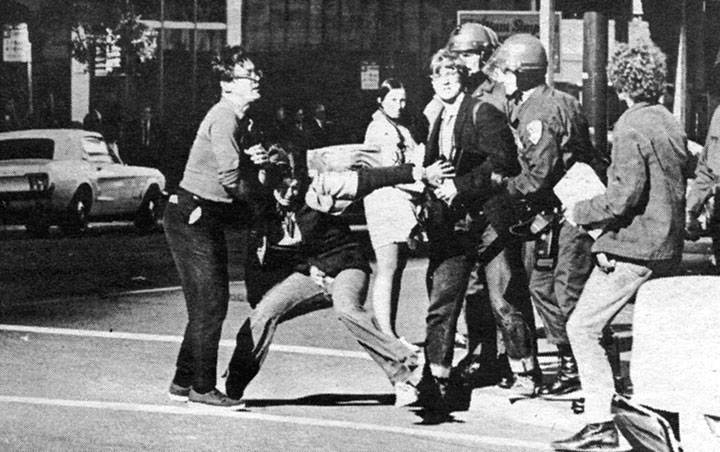 May Day 1971 -- skirmish at downtown intersection.

The financial district got an adrenal rush in SF last Wednesday. Office workers for the most part stayed at their jobs and the wheels of war continued but everyone was aware that something was happening. Demonstrators were scattered all throughout the area and their words were falling on a lot of sympathetic ears. The full invincible force of the city's private army was there including Motorcycle pigs, Honda Hogs, Horse Mounted pigs, squad cars with four cops in them, Tac squadders on foot, and plain clothes pigs. They angrily busted over 100 demonstrators. Two of the victims were Good Times reporters Eric and Mike. They both have a story we would like to print. The pigs don't relate to deadlines. 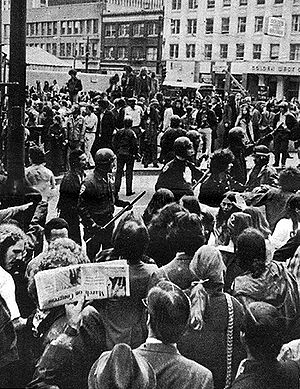 Photo: Good Times newspaper, May 1971
There are a lot of stories to tell about the day's activities. Most of them are repeats of similar incidents that were going on throughout the country. Office workers standing on the streets in front of their corporations rapping, some of them getting clubbed or busted in the rush of pig violence. Cops busting people with total disregard for their rights. Slamming them into paddy wagons as if they were hardened criminals. Demonstrators chanting and laughing. Everyone involved.

Here's one account from a brother back from the day:

1:00 People rapping in groups on corners all over financial district. Freaks presenting treaty to Montgomery streeters. . .explaining it to them. Majority of them were sympathetic. Streets very crowded--workers on lunch now-- Theatrics at B of A plaza ... burning of U.S. flag. (mime troupe?) Plaza packed. Then after theatre, group breaks up into splinter groups ... each proceeding to, a target building (Shell Oil, Std. Oil etc.) But most of the buildings were locked & super "secure". Crowds, wandering around the sidewalks found horsepigs surrounding them. With the sidewalks packed, a few mounted pigs began backing their horses into people. Then indiscriminate clubbing. Screams and hysteria.

2:00 Young office workers got clubbed along with freaks. Pigs were especially brutal to women-- Saw one pig at Zellerbach Plaza ride his horse into a crowd. A secretary screamed and the pig grabbed her by the hair and dragged her to a paddy wagon.

Drifted down towards Battery & Market. Workers stood with demonstrators gaping in awe as a brother ran up Battery St. with 3 mounted pigs in hot pursuit. "Run, Run!" came the cries from freaks & straights alike. Someone who had seen the beginning of the chase said that he had been holding a sign when a pig declared his corner to be an illegal assembly... and that made him the "leader" of the illegal assembly. 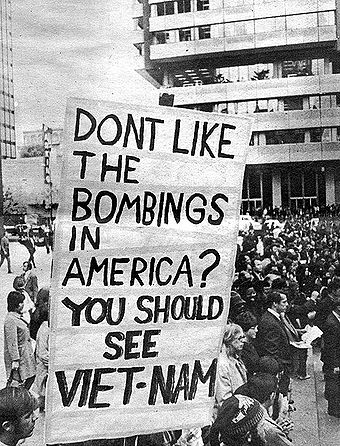 Photo: Good Times newspaper, May 1971
Near the Stock Exchange a brother lay on the ground unconscious bleeding from the head. A pig stood over him. No medical aid for twenty min. then into a paddy wagon. On California St. a brother lay on the sidewalk badly hurt ... kicked by a horse. Stockbrokers with horror on their faces.

Later in the afternoon the streets of the financial district were mostly deserted except for clusters of freaks and cops on alternate corners. Occasionally the cops would ask them to move on. Eventually people started drifting over to Union Square. Union Square was quickly surrounded by pigs and as people gathered there, Honda Hogs would ride into the park and harass and intimidate. A couple of people were quickly busted for no apparent reason. Then a brother hoisted a peace flag and things got heavy. Cops came flying at him as though he had shot off a cannon and the brother was hauled away. The pigs stood tense waiting for the next feeble excuse to spring.

Honda Hog stepped up to and screamed in my face "Get out of this Park! Get out!'

Soon an announcement came over a bullhorn from outside the Square. "You have five minutes to disperse." And then the countdown ... one ... two...

At five they charged the park like outraged rednecks. The Square was cleared within minutes. The pigs call it a victory. For our part the war isn't over yet. The whole day was just one battle more.