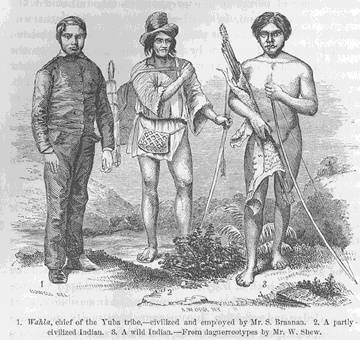 The Indian population attached to the missions were meanwhile becoming an industrious, contented and numerous class, though indeed, in intelligence and manly spirit, they were little better than bestias--beasts, after all. Generally speaking, the Indians along the whole north-west coast of America were a very inferior order of being to the great tribes who inhabited the Atlantic border; and, in particular, the different races who dwelt in California were but poor wandering clans who subsisted on what they could procure by hunting, and fishing, and on the fruits and grains which grew spontaneously; but they knew nothing of the arts of agriculture, or even of a pastoral life. They might properly enough be compared to the aborigines of Australia or to the Hottentots, or, perhaps, even the Bosjesmans of Southern Africa, who have been considered the most barbarous and brute-like people on the earth. On this subject, Humboldt remarks that " the Indians of the Bay of San Francisco were equally wretched at that time (the establishment of the missions), with the inhabitants of Van Diemen's Land." Venegas has said of the aborigines of the peninsula, who closely resembled their brethren in Upper California, that "it is not easy for Europeans who were never out of their own country to conceive an adequate idea of these people. For even in the least frequented corners of the globe there is not a nation so stupid, of such contracted ideas, and weak both in body and mind, as the unhappy Californians. Their characteristics are stupidity and insensibility, want of knowledge and reflection, inconstancy, impetuosity and blindness of appetite, an excessive sloth, and abhorrence of all fatigues of every kind, however trifling or brutal; in fine, a most wretched want of every thing which constitutes the real man and renders him rational, inventive, tractable, and useful to himself and society."

The worthy Father Michael certainly paints, in dull enough colors, his protégés and converts. It may be farther remarked, that the Indians appear to have had little or no notion of religion, although they seem to have had a kind of sorcerer among them who amused or terrified themselves and their patients with sundry superstitions observances. Some writers, such as La Prouse, say, that they had no knowledge of a God or a future state; others simply call them idolaters. The natives around San Francisco Bay appear to have burned the corpses of their people, while other tribes, more to the south, always buried theirs. Occasionally, they appear to have eaten pieces of the bodies of their more distinguished adversaries killed in battle, although this was probably only to insure, as they imagined, that a portion of the brave spirit and good qualities of the slain should enter into and be incorporated with their own systems along with the literal flesh of their antagonists.

These notices and the extracts previously given from the voyages of Drake and Cavendish, abundantly establish the fact of the wretched state of humanity in California. And so it might have been till doomsday, had not a new people appeared on the scene. The Spanish population, and the Fathers, could not, or would not, as truly they did not, as we may afterwards see, do anything to promote the happiness of the human race in the country.

But another race was destined soon to blow aside the old mists of ignorance and stupidity, and to develop the exceeding riches of the land, which had lain, undisturbed and concealed, during so many ages. The Spaniards had scarcely proceeded any way in the great work--if they had not rather retarded it--when the Anglo-Saxons, the true and perhaps only type of modern progress, hastily stepped in, and unscrupulously swept away both their immediate forerunners as effete workers, and the aborigines of the land all as lumberers and nuisances in the great western highway of civilization. This highway is fated to girdle the globe, and probably, in the course of a few centuries, will join the original starting-point in the natal home of the "Pilgrim Fathers " in old England. The "pioneers" of California are our "Pilgrim Fathers," and there need be not the slightest doubt but that the empire, or rather the great union of peoples and nations in the Pacific will soon--perhaps in fifty years, perhaps in a century--rival, if not surpass the magnificent States of the Atlantic. Indians, Spaniards of many provinces, Hawaiians, Japanese, Chinese, Malays, Tartars and Russians, must all give place to the resistless flood of Anglo-Saxon or American progress. These peoples need not, and most of them probably cannot be swept from the face of the earth; but undoubtedly their national characteristics and opposing qualities and customs must be materially modified, and closely assimilated to those of the civilizing and dominant race. The English in India have already shown how a beginning may be made; the Americans, on the California coasts, and farther west, will still more develop the modern system of progress. People may differ in opinion as to the equity of the particular steps attending the process, and many honest folk may even doubt its ultimate benefit to mankind; yet that some such grand result will hereafter be evolved from the energy and ebullition of the American character, and from the peculiar circumstances of American position in the world, must be evident to all who take a dispassionate and unprejudiced view of the matter.