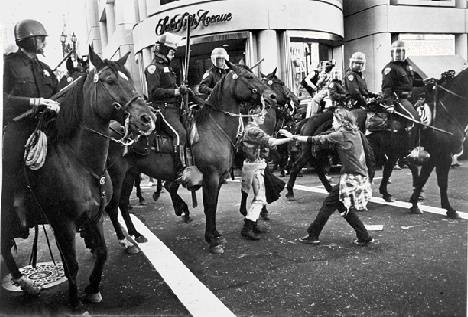 Young squatters were the backbone of many direct actions during the THE DEMOCRATIC CONVENTION COMES TO TOWN 1984 Democratic Convention, such as the one pictured here on Union Square, part of the 1984 War Chest Tours War Chest Tours.

Many of the squatter activists evicted from The Vats had moved to nearby 5th and Folsom Streets, (South of Market) where they moved into an abandoned building once operated by the Hotel Owners Laundry Company (nicknamed HOLC or "hole-see"). From April to late October 1984 the HOLC residents ran a very activist, political squat during the most politically tense period in San Francisco since the Mayor George Moscone assassination of Mayor Moscone and Harvey Milk. One major difference from the laissez-faire squatting at The Vats, according to HOLC resident Steve S., was that meetings were held twice weekly and two rules agreed on: no shooting drugs and everyone had to work. There was also distribution of free food, which was the initial attraction for Steve S:

The HOLC squat, which had become an activist center initiating other squats showing movies, distributing free food, had avoided any major police harassment during the Democratic Convention. But they were finally evicted in mid- October 1984. According to Waltz, it took the Hong Kong owners a long time to go through the proper legal procedures after they had been informed of the squat by a neighbor. (1988: p. 6) The HOLC squatters' high-profile activism got them into the local newspapers at the time of their eviction. Local columnist Warren Hinkle wrote of the scene in front of HOLC the day of their eviction:

The HOLC squatters were not as hapless as they might have seemed in Hinkle's column; they soon regrouped on the sidewalk of Clementina Alley between 1st and 2nd in front of an anarchistic live/work space known as "The Cave," (which also housed the subversive work 'zine Unions_itm Processed World) but were ousted within a half day. A few days later they moved to a nearby building at 6th and Folsom Streets, owned by the city's Recreation and Parks Department. But following a complaint signed by a Park-Rec manager October 22, the police kicked in the door of the new squat and charged in with their guns drawn. They arrested 29 people on charges of trespassing ("Police Roust Squatters Twice in One Week," 1984).