Listen to an audio description of the Gartland Hotel fire and displacement in the 1970s, part of the "Bending Over Backwards" walking tour:

Back to First Stop on "Bending Over Backwards" tour

by Brian Doohan, from his 1981 pamphlet, Fire and Gold 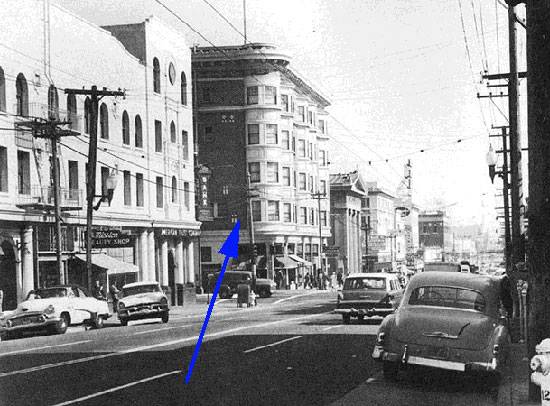 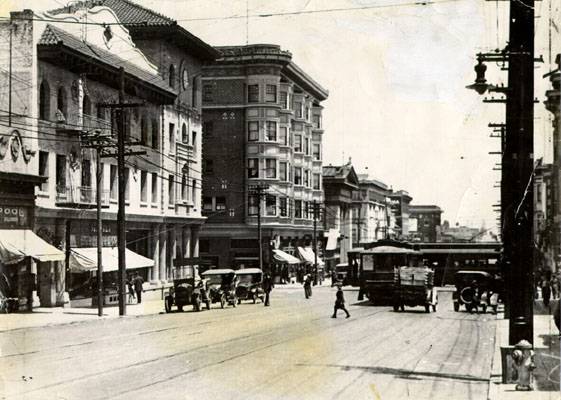 The same corner in 1918. Note the canvas-topped autos, women's long skirts and boys' knickers, popular in those days. 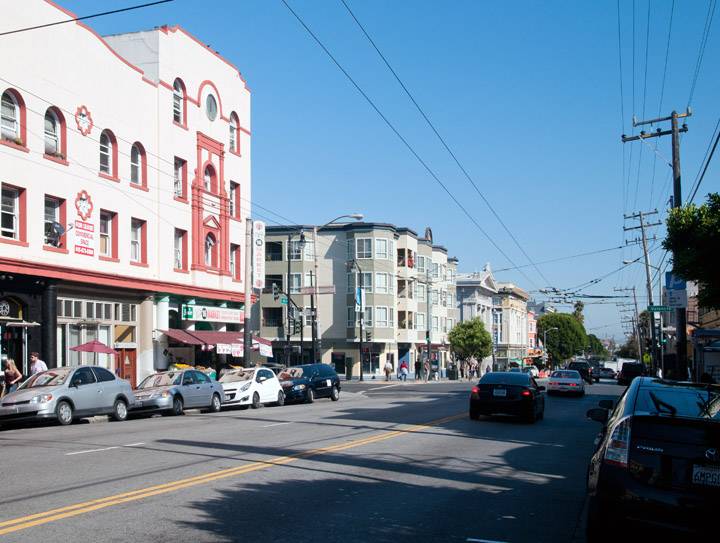 Intersection of 16th and Valencia as it looks in 2013. 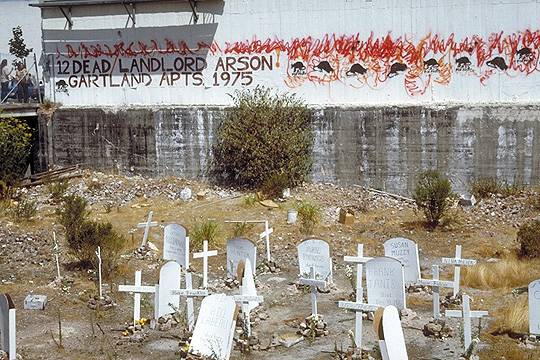 The Gartland Pit garnished with the proverbial "writing on the wall."

Shortly after three the morning of December 12, 1975, a person or persons unknown entered the Gartland apartments at 495 Valencia Street near 16th, mounted five flights of stairs and poured gasoline across the landing. Trailing a stream of deadly petrochemicals, they retreated down again and, at the bottom of the steps, a match was struck. The arsonist sauntered out the front door.

Two weeks before Christmas ten years ago, the City seemed a better place for low and middle income renters. A few hours before the fire, George Moscone had won a runoff victory over realtor John Barbagelata, becoming San Francisco's thirty-seventh mayor. In a deepening climate of racial, economic and geographic polarization, Moscone's 90% margin in parts of the Fillmore, Hunters Point and Bayview had overcome his challenger's 70% tally in many southern and western precincts. Watching from the sidelines was then-supervisor Dianne Feinstein, who had trailed badly in the first election and, in the opinion of political observers, was considering a career in the private sector. 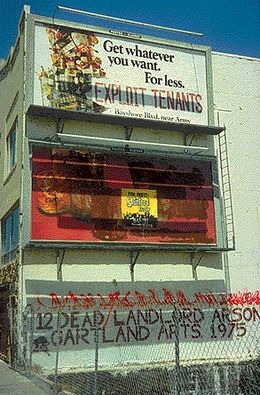 Good Gerald Ford lacked some of JFK's charisma and the tortured majesty of Lincoln, but he wasn't Nixon either. Two assassinettes had missed the lucky President. Trails were in progress. And F. Lee Bailey, lawyer for the Hearst pup who had robbed her daddy's rival's bank explained the violence and cynicism in his proud exterminator's logic, sweeping the decade and its corruptions into the dust like so many dead cockroaches.

Barbara Davis, part of that fun clientele, had had some trouble sleeping Thursday night and sat up into Friday morning in the kitchen, smoking cigarettes and pondering the funny ways of life. With an infant in the house, one adjusts to inconsistent hours. That inconsistency would save both their lives.

"I saw black smoke coming through the front door," she told reporters hours later. "There was a fire. I figured we wouldn't be able to make it out.

"I grabbed the baby and then I picked up the radio. I don't know why."

"Those lucky enough to rise made for their doors, windows, ultimately the roof. We watched the living room burn up around us while we waited for the firemen," said one survivor, Randy Bates.

Rodney Hilton watched the burning from the Valencia Hotel across the street. Gertrude McGrath waited at her fourth floor corner window for help that never arrived. "The flames just shot into her room," Hilton said, "and I didn't see her anymore. She just burst into flames."

The Gartland's sole fire escape fronted a common hallway, in which vicinity the gasoline had been ignited and the flames were at their fiercest.

Lieutenant Sylvester Moon Cutter, transferred from his usual position at the Stonestown fire station due to a manpower shortage, finished the last shift of his career before retirement in the hospital, face and hands hideously burned. In all, eleven firemen and three residents would be injured by the fire. Twelve would die... officially... seven women, four men and 21 month old Christopher Lee.

It would be the worst incineration in the city since twenty two pensioners burned to cinders at the Thomas Hotel, 971 Mission, on January 6, 1971... the worst confirmed arson murder since twenty two predominantly elderly tenants perished on March 28, 1944 at the New Amsterdam Hotel, 273 Fourth Street.

Throughout the morning and into Friday afternoon, the ruins were exhumed. A temporary morgue was established on the sidewalk fronting the Wells Fargo Bank across 16th Street.

It may have been murder, Baron Muller suggested in the Examiner.

Soon, the papers had a suspect and a motive. Hate Filled Man Sought In Blaze! they screamed, citing a police inspector, one Ernest Capper, who on further reading, hadn't exactly found the perpetrator, or even arrested suspects. No, Capper had been merely theorizing that a deranged arsonist seething with spite and blind hate either had a key or was let into the building.

And if this did not exactly assuage the expectations of the readers, it did shed some faint light on the Gartland's security, one of many problems that beset its fun clientele.

As it would turn out, a minimum of twelve apartments were officially vacant. Not a few Gartland keys were afloat in the neighborhood and then, as now, transients, former tenants and people with no money for rent but with a buddy who knew someone with a key. And whether they hated (blind or not), or merely slept, the Gartland's blazing harvest was conservatively accounted. Raised to an unofficial minimum of fourteen, local estimates averaged at least ten more.

The survivors called for justice.

"How else could it happen?" declared Harry Nanos, owner of the Sanitary market on the ground floor. "Arsonists? Hang them!"

The owner of the Gartland was one Beatrice Presant, a resident of Ingleside who had purchased the building in 1958 from Northern Counties Title Co., successor to the firm of DLZ Realty, one of many corporate entities fashioned by Gerald Dowd, David Levy and Arthur Zanello. A piddling landlady, by San Francisco standards, Presant was experiencing some financial stress attributable, after a which-came-first-the-chicken-or-the-egg-fashion to vacancies in the Gartland and her other properties; 441 Ellis, 110 Frederick, and 1860 Jackson.

Presant's troubled empire was the subject of an October, 1973 article in the North Mission News, detailing a history of bills unpaid, properties condemned and fires. Most significantly, the Gartland had been condemned for over two years since a fire on September 23, 1973. Fires in 1975 alone had occurred on January 28, February 23, August 14 and 19 and September 27.

The first issue of that periodical stated:

Following an inspection on January 18, 1972, the Gartland was cited for 38 code violations, including a lack of sprinklers in the basement and hazardous wiring. On September 29th, 1972, the Department of Public Works (DPW) issued a report outlining these violations... In August of 1975, the City Attorney moved to advance the matter to court, and in November a trial date was set for January 26, 1976.

Violations at the Gartland at the time of the fire included missing fire hoses and extinguishers, no fire alarm system and at least 19 code offenses. In all, twenty fires occurred in Presant buildings in the two years before the fire.

Only one property owned by Presant's Summit Realty escaped the cycle of neglect, 895 O'Farrell, which benefitted from a stable tenancy. . . the Mitchell Brothers' Theatre.

Weighed against this history was Beatrice Presant herself, a widow, seriously injured in a fall several years earlier and confined to a wheelchair. Even as Mayor-elect Moscone made a graveside plea for an investigation, her attorney Charles O. Morgan set into being a campaign to whitewash Presant as a confused and pitiable victim of circumstances.

Presant was never indicted, convicted, or even called to account by the daily media. By the time Morgan had worked his magic, one would almost want to sent a Christmas basket to the poor old landlady. 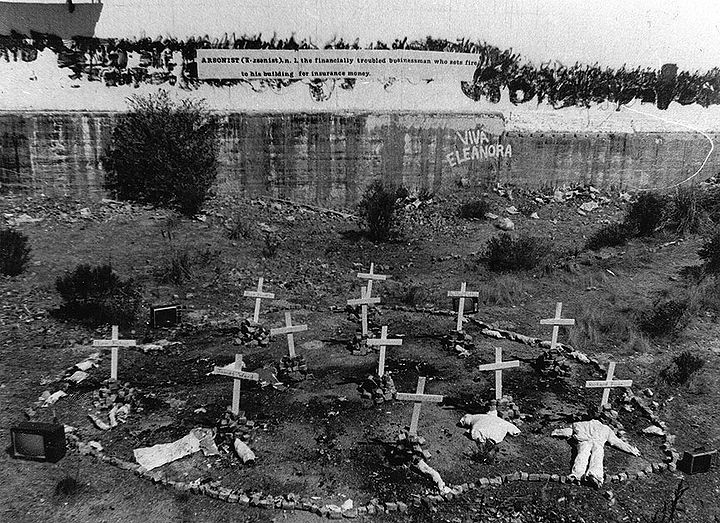 The Gartland Pit in the Mission.