Difference between revisions of "The Fillmore: A Jewish Neighborhood in the 1920s" 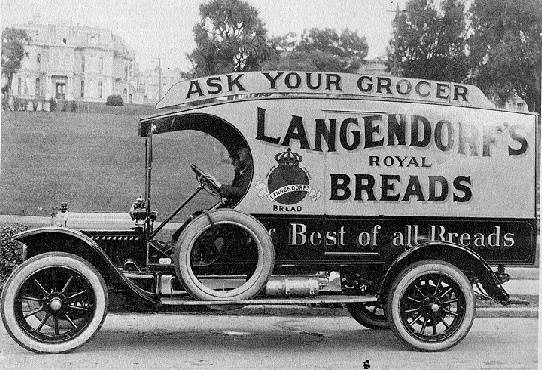 His rye bread was reportedly made from an old Viennese formula. After the 1906 earthquake and fire destroyed his small bakery, Bernard re-opened at 878 McAllister, near Laguna. In 1915, with $400,000 raised from ten prominent San Franciscans, he built a new, expanded plant at 1160 McAllister. By the early Twenties, a fleet of delivery wagons with tow-horse teams rented from a nearby stable, together with several battery-operated white trucks, were covering the City. Neighboring merchants and former employees remember Bernard boarding the No. 5 McAllister streetcar and carrying a paper bag full of bakery cash on his way to the bank.

The Jefferson, owned by I. Goldstein, was the principal fresh-chicken headquarters for the San Francisco's Jewish community. The place bulged with screeching chickens. A cloud of feathers constantly filled the air. Cages of noisy chickens were piled up on the sidewalk outside, leaving only narrow aisles for passing pedestrians and entering customers. You selected the chicken you wanted and one of the clerks would take it, squawking and flapping, out of the cage. He would carry it back to the rear of the market where the "shochet," the Kosher slaughterer, killed it with a straight-edge razor slit across the neck and hung it head down to let it bleed. Then it was plucked clean of feathers, wrapped in a newspaper, and handed to you.