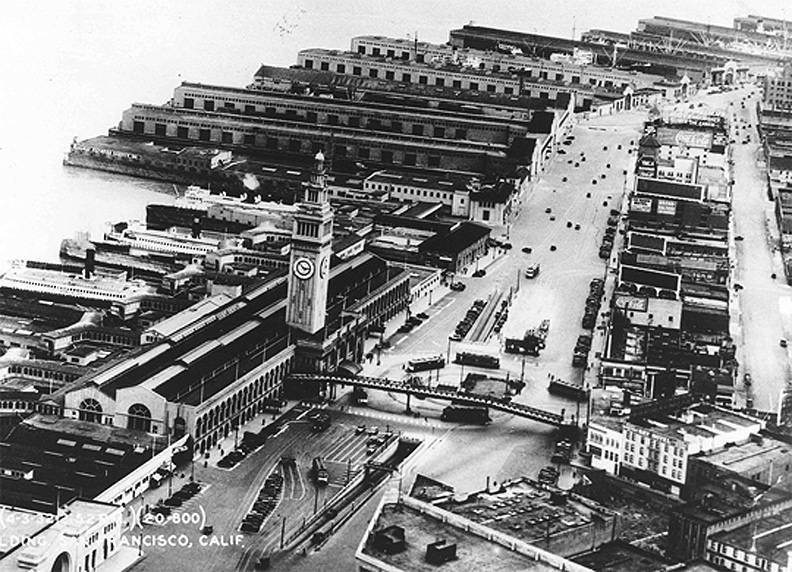 Aerial of the Port of San Francisco in 1932. 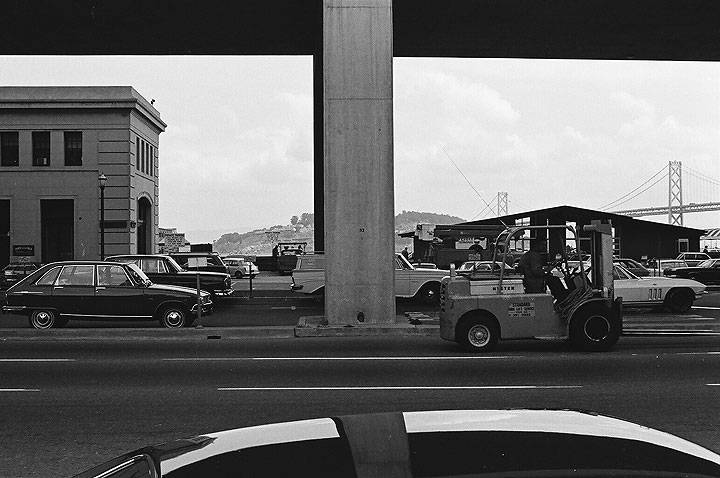 The view of the waterfront under the Embarcadero Freeway, apx. Pier 5, c. 1966. 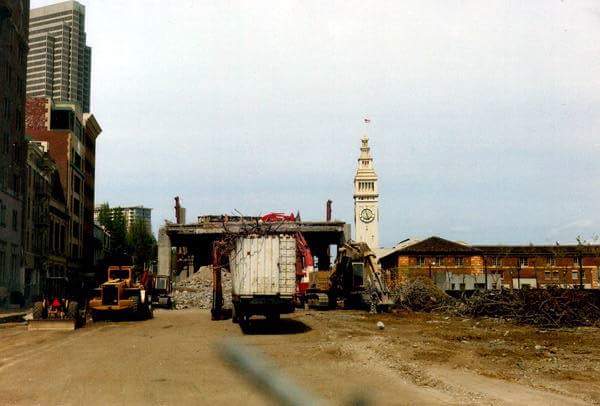 Watefront emerging as Embarcadero Freeway is torn down, mid-1990s. 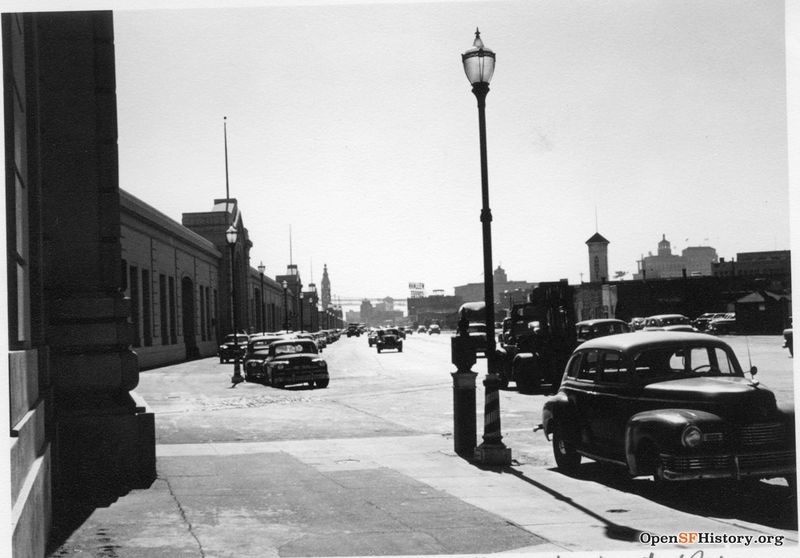 View south along the waterfront towards Ferry Building from apx. Pier 19, c. 1953.

A year before Proposition H was passed in November 1990 [mandating a coherent waterfront planning process], the 1989 Loma Prieta earthquake severely damaged the Embarcadero Freeway, thus providing the opportunity to rethink the relationship between the city and its waterfront and to implement policies that had been in place since 1977 as part of the Northeastern Waterfront Plan. Furthermore, the city had for years maintained as official policy that the Embarcadero Freeway should be removed. The original concept to carry out these policies was developed during the 1980s as the I-280 Transfer Concept Plan. Elusive financing and jurisdictional issues, especially with the California Department of Transportation (CalTrans), were barriers to its implementation. And in 1986, San Franciscans actually voted against removing the freeway. The watershed moment came with the state's evaluation that the Embarcadero Freeway was too severely damaged by the 1989 quake to repair; it would have to be rebuilt. The city, whose opinion of the freeway had changed in the intervening years, gasped collectively at the thought and Mayor Agnos organized to fight Sacramento. The board of supervisors joined the mayor by adopting an anti-freeway stance, and an unusual sense of common purpose brought various city agencies together. The city prevailed in its demand that the freeway be removed and replaced with surface transportation elements that reflected city policy.(10) 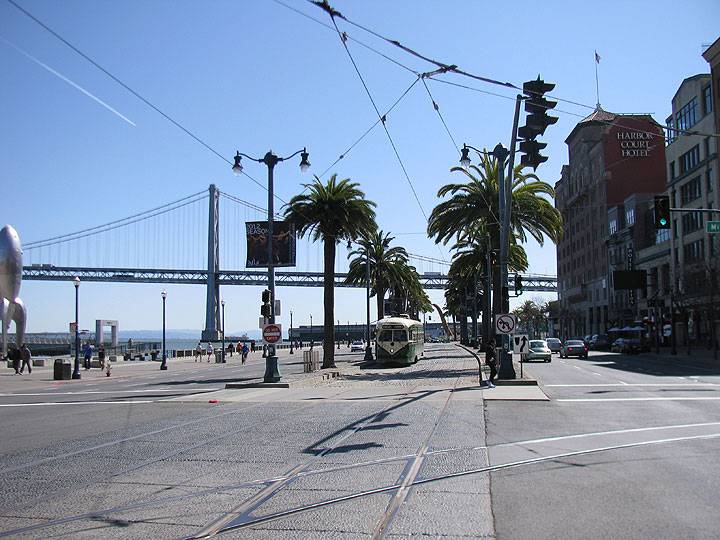 Embarcadero at Mission in 2010, long after the demolition of the Embarcadero Freeway and the building of new MUNI facilities, including the F-line running to Fisherman's Wharf. 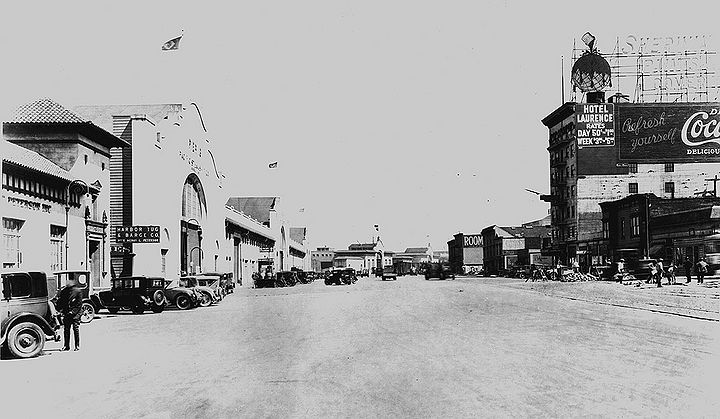 Embarcadero southeast from about Howard, 1927. 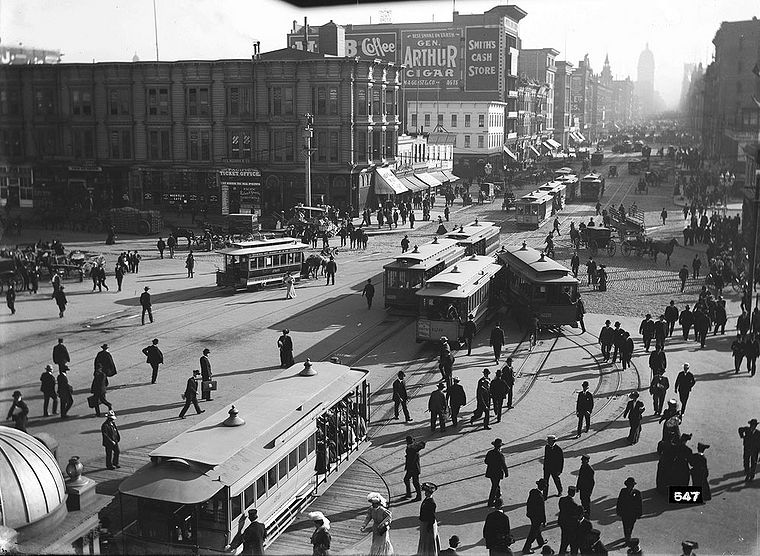 Looking up Market Street from the Ferry Building, 1905.

The design for the new Embarcadero roadway included a significant amount of port property, and only a few general policies existed pertaining to its reuse and reconfiguration. So, planning for the new roadway was undertaken in a multiagency effort coordinated by the city's Chief Administrator's Office under the rubric of the Waterfront Transportation Projects Office (WTPO).(11) Then began a ten-year planning effort that involved substantial community input, a citizen's advisory committee for the Embarcadero Project, and many, many consultants, with the design firm ROMA at the forefront. As described by the WTPO, the city had been "presented with an unprecedented opportunity to realize its vision for a tree-lined boulevard with rail, bicycle, pedestrian, and public art amenities along the northeastern waterfront and [to] create a civic plaza that acknowledges the importance of the Ferry Building, the terminus of Market Street, and the city's historic relationship to the waterfront."(12) Funding for the massive project was secured from a variety of federal, state, and local sources. The $700 million collection of projects was immense and immensely complex; it is not possible to address them fully here. 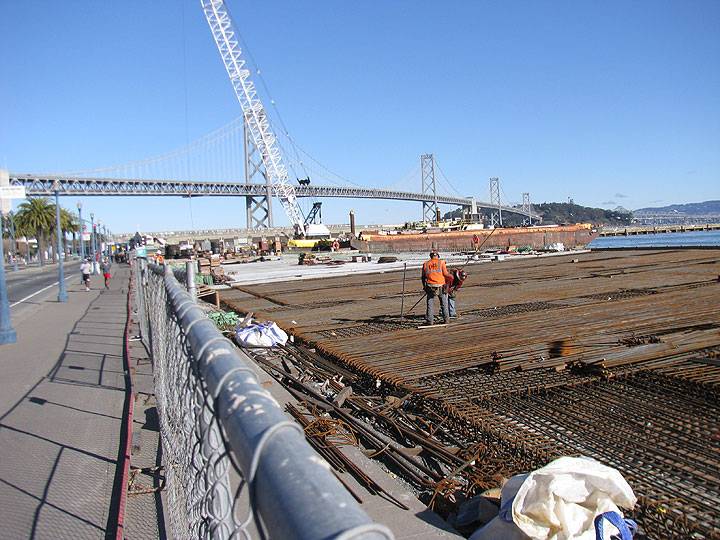 Pier 36 being rebuilt as a new shoreline park, 2013. Embarcadero roadway with pedestrian promenade and palm trees at left.

Let it suffice to summarize the main components, all of which were completed by the early 2000s: a new alignment for the Embarcadero boulevard that incorporates bicycle lanes and an exclusive right-of-way for an extension of the F streetcar line from the Ferry Building to Fisherman's Wharf (service started in 2000); a water-side pedestrian promenade that runs from Fisherman's Wharf to China Basin Channel (Herb Caen Way); an extension of MUNI's light-rail system south of Townsend Street along an exclusive right-of- way in the center of the Embarcadero, completed in 1997; an underground MUNI switching yard that was originally to be placed under the elevated freeway; several open-space improvements; and lots of Canary Island palm trees (without dates, so no messy cleanup). The port described the impact of these projects in no uncertain terms: "Together, they singularly changed the character of the northern waterfront from an industrial service corridor to an outdoor living room for San Francisco."(13) 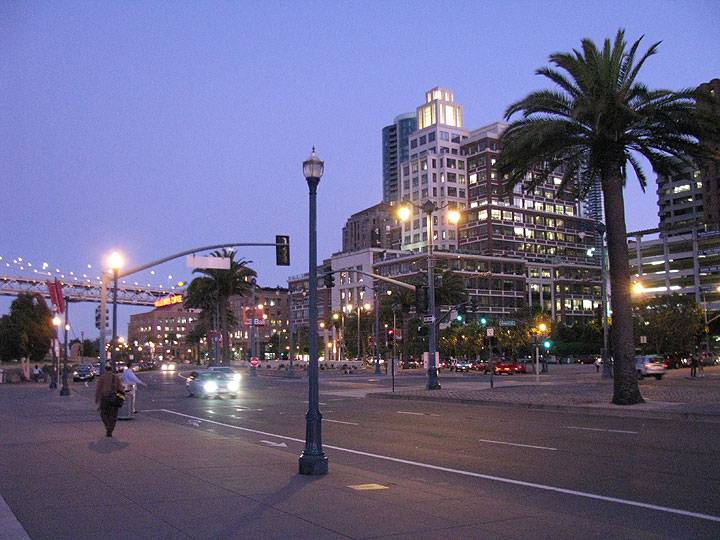 Embarcadero near dusk, at about Howard and the Embarcadero. 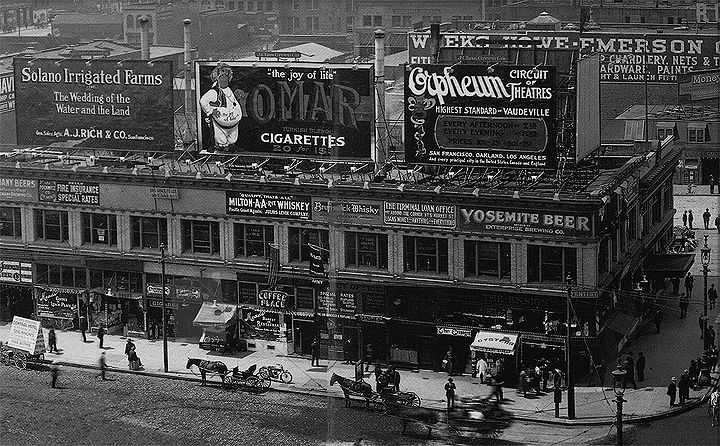 Corner of Steuart and Market, c. 1913, when it was fully connected to the waterfront and maritime industries.

Of particular interest to the port was a subset of this program, referred to as the Mid-Embarcadero Roadway project, initiated in 1998 and completed in 2000. Its main piece is a large plaza that connects the Ferry Building to the foot of Market Street and the Embarcadero Center. From it jut spiky "light cannons" that beam their lumens into the night sky. The port linked the success of the then-nascent Ferry Building rehabilitation and related Downtown Ferry Terminal projects, mentioned below, to the new open space. The concept had evolved from the larger Embarcadero program, and in 1995, officials were already speaking of it in near-giddy terms. "This is a singular opportunity to make the most important space in the city," enthused the director of the planning department, Lucian Blazej. ROMA's Boris Dramov was broadly categorical in his assertion that "the crossings of people will make this place unlike any other place. . . . The historic city front will be reinstated. People will want to feel it."(14) But these were not necessarily exaggerations. To underscore its public importance the plaza was named for Harry Bridges, famed waterfront labor leader, and was paid for with public funding, including Federal Highway Administration grants and local voter-approved sales taxes earmarked for transportation. However, the plaza design was the subject of an intense battle over whether to put the roadway underground, and then whether to split the north and south bound lanes. Costs and safety concerns led to a surface roadway split around a plaza, making an island of the open space. The end result leaves much to be desired from a physical design perspective, but it involved much compromise and hand-wringing. 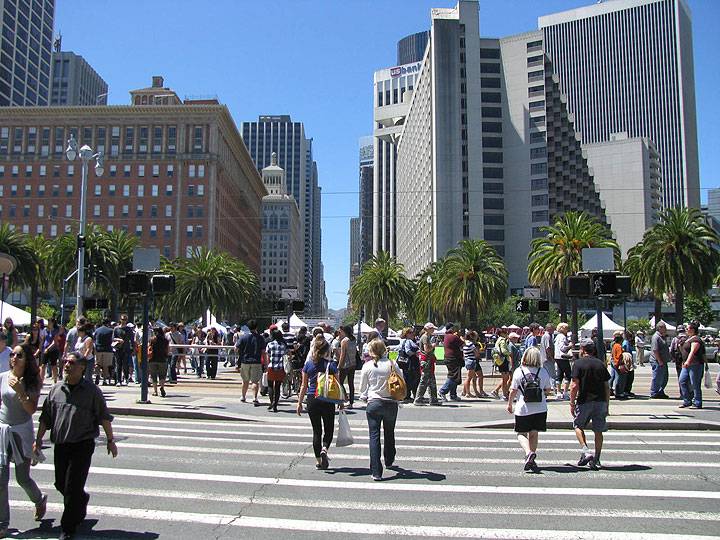 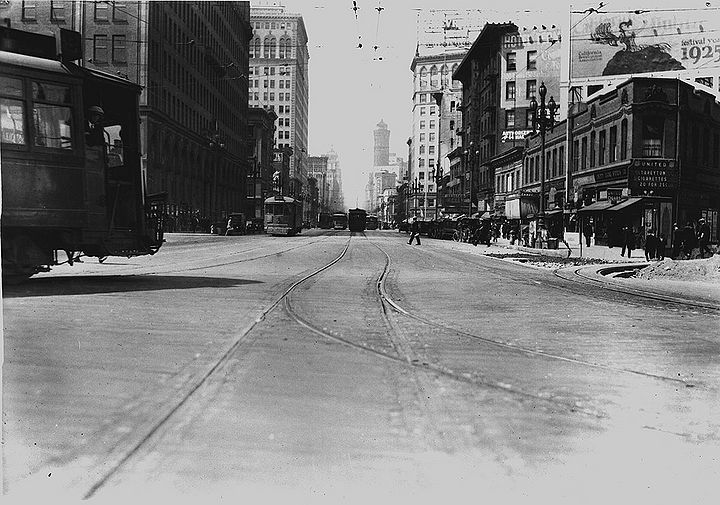 The overall effect of the Embarcadero projects has been to reunite the city and its waterfront in ways that benefit a wide public. In 1995, before the Mid-Embarcadero project was begun, San Francisco Tomorrow member Norman Rolfe repeated what was becoming a common refrain, that "the waterfront should not be set off from the public by private clubs, hotels, and highrises. We'd like to see esplanades and maritime uses, things that connect people to the bay and the ocean." His wish, shared by many others, was starting to coming true, and the Waterfront Land Use Plan provided the well into which the public could throw its coins, and not just metaphorically speaking.(15)

10. Notably, the board vote was close—six to five. Chinatown merchants and political agitators pushed for the freeway's reconstruction, arguing that tourism and trade would suffer without the easy automobile access. Their fears were never realized.
11. Planning for the Waterfront Transportation Projects, also called the Embarcadero Transportation Projects, had actually begun before the earthquake, and assumed the presence of the freeway. The earthquake caused a complete reevaluation of the WTP, especially for the mid-Embarcadero segment running from Folsom to Broadway (PSF, Waterfront Land Use Plan, 24).
12. Mid-Embarcadero Open Space Project, Chief Administrative Officer's Waterfront Transportation Projects Office (San Francisco, 1994), 5.
13. PSF, "Information Presentation on a Ten-Year Review of the Waterfront Land Use Plan," staff memorandum to the port commission, San Francisco, December 3, 2008, 15.
14. Dan Levy, "Dean of Renaissance at Ferry Plaza," San Francisco Chronicle, October 9, 1995.
15. Ibid. 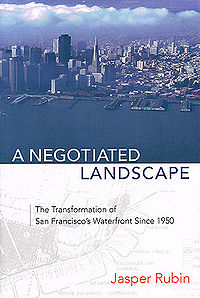 Excerpted with permission from A Negotiated Landscape © 2011 Jasper Rubin and the Center for American Places at Columbia College Chicago
Retrieved from "http://foundsf.org/index.php?title=The_Embarcadero_Reborn&oldid=33660"
Share this page: